👤by Tony Le Bourne  Comments 📅11-11-17
Conclusion
Before rounding up our thoughts, now would be a good time to call out the arguably irresponsible, and almost tiresome use of military inspired nomenclature used by a significant proportion of tech companies out there. As we approach Remembrance Day, let us recognise that war is not cool, it is not a sport, nor is it fun. Games often run with stories and situations of war as a central axis to create drama and excitement. Though for some, that 'war is fun' line can sometimes get blurred, especially with younger gamers. Whether games are sending a positive or negative message on violence is a discussion for another day, and for most sensible people, there is no real problem with their moral compass. Regardless, surely it is worth asking whether or not it is sensible to do without the glorification of destructive weapons from the technology which we own and choose to buy? Do we have a responsibility to prevent a 'war sells technology' scenario in the same immoral sense that 'sex sells'? We are not singling any manufacturers out here, and in this instance we understand that it would be difficult to completely stray from this this trend when you consider that this particular motherboard has incorporated technology from a brand named 'Killer'. Still we are happy to see that MSI went with 'X370 GAMING M7 ACK', over something like 'X370 GAMING BRUTAL MURDER WAR SARIN DEATH ULTRA KILL'.

MSI have dished out some excellent motherboards for the AM4 platform so far, and each of them has give some incredibly competitive features for their price range. The X370 GAMING M7 ACK certainly follows this lead with a few additional tricks up its sleeve. The Killer Doubleshot Pro will make many gamers happy, especially if their situation restricts them to a wireless connection, however it is also good to see that you can benefit from being connected both wirelessly and wired. Additionally, we love the inclusion of an extra M.2 slot because they are certainly growing in popularity for various reasons ranging from performance, to being able to make life a little easier in regards to system setup. On top of this, the M.2 FROZR is a brilliant idea. By expanding the chipset heatsink to cover the M.2 drives to help prevent throttling after long periods of use. 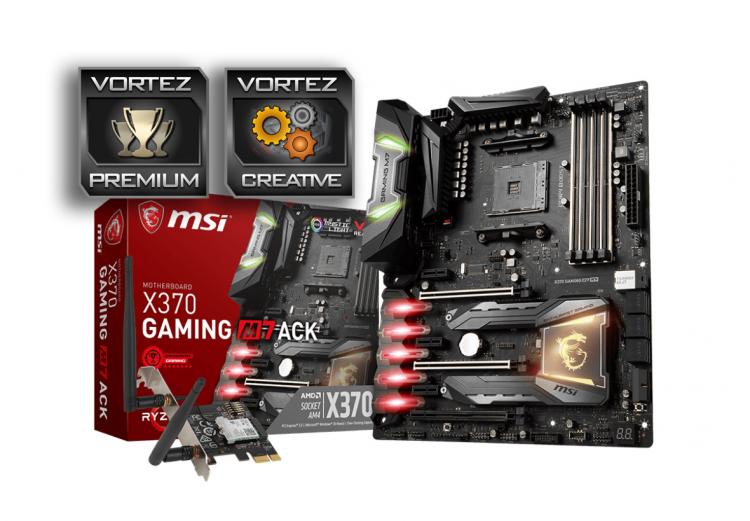 There are few drawbacks to the X370 GAMING M7 ACK, most of which can easily be overlooked but is worth discussing regardless. A question we thought about for a while was about what its market intention is in comparison to the X370 XPOWER GAMING TITANIUM a fantastic motherboard in its own right. The X370 Titanium had some features orientated for enthusiast overclocking but missed out many others including something as vital as a baseclock generator. While the X370 GAMING M7 ACK features a baseclock generator, but pretty much doesn't feature anything for enthusiast overclockers or water coolers (unless you want to count a single 2A 4pin fan header), not even an onboard power button. Again, it appears that MSI have completely ignored AMD's RGB cooler design and have not included an RGB header nearby the CPU fan header (of which is rocking solo without an additional 'optional' CPU fan header). We could argue that 'Gaming' doesn't imply 'top end/enthusiast', but this is the kind of language manufacturers use to present their product, and without a clear market definition of these terms, the use of this language is something that maybe we should start addressing, especially when something is self-certified as 'enthusiast'.

Of the few real downsides we discovered in our time with this motherboard, some can be directly credited to the fact that there are still some teething issues surrounding AMD Ryzen, but the one thing we can credit to MSI is that there is NO video out. This means that it will be a rather pointless choice if you plan on taking advantage of any APUs released by AMD in future.

Aside from the above notes, MSI deserve commendation on the awesome specification and features that they have packed into this motherboard. Solid performance, high-grade components, class leading technologies that are all supported by easy to use software and BIOS. The result is that that you can be sure that you will get a first class experience from your AMD Ryzen CPU. In short, this is an incredible gaming motherboard that stands out enough to warrant sticking its tongue out at its competitors.

If you are looking for an X370 motherboard and are carefully considering your needs, many people may very well find that the X370 GAMING M7 ACK will come out on top.

Cons
- No Video out