👤by David Mitchelson  Comments 📅23-04-12
Conclusion
Ever since the Z77A-GD65 arrived I have been keen to share my thoughts on this delightful offering from MSI. Those reading this will have undoubtedly read various Z77 motherboard reviews around the web already; we have held back any reviews as we decided it would be in the readers best interest to analyse all Z77 motherboards using Intel Ivy Bridge CPUs rather than Sandy Bridge as most media have done already  this makes much more sense, Z77 is designed for Ivy Bridge and as is always the case, we want to give the reader the most complete and fulfilling review rather than just publishing an article to pull in view counts!

So where do we stand with GD65? Well, its simply one of the best options currently available for Intel Z77/Ivy Bridge. The benchmarks may have revealed that this motherboard isnt the best at stock speeds but the results are only marginal when you look at them more closely and it isnt just about performance related results that makes a product the cream of the crop. 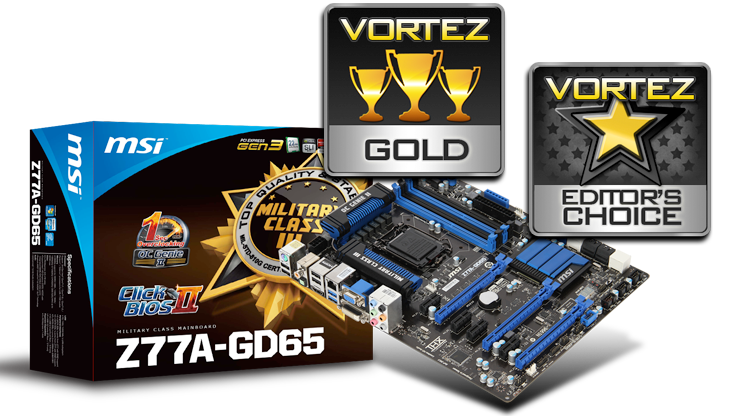 GD65s feature-set is what sets this motherboard apart. Enthusiasts will appreciate the clean, sleek and refined aesthetics on outside with a stunning black and blue appearance and Military Class III components to compliment which provide added reliability and longevity. Under the hood MSIs BIOS is simply outstanding. Tweaking settings and getting that all important overclock has never been as exciting and now that MSI have refined their GUI and removed glitches  users can now use their favourite gaming mouse without suffering incompatibilities or navigation lag as per our Z77A-GD65 BIOS Video

Overclocking our Ivy Bridge 3750K to 4.8GHz revealed some significant benefits across a large spectrum of environments and altering the multiplier in the BIOS causes various safety features (that would otherwise prevent an overclock) to disable making it even easier to get that frequency nudged up.

Pricing sits at around £150 for the Z77A-GD65 which is actually very good for such a high-end offering. Overall, Ive been very impressed with this motherboard and as a result it comes highly recommended with an Editors Choice award as well as scoring Gold.