👤by Ed Hume  Comments 📅29-06-13
Noctua Fans tested on NH-D14 Cooler
Since Noctua's NF-A15 fans were designed to be used on heatsinks, we need to see how well they cool a heatsink. That's what this page is all about.

Setup for Noctua fans on an NH-D14

Measuring airflow in a box allows you to know how a fan will perform as a case fan. But when you are considering a fan for a heatsink, you want to know how well it will cool your CPU. The Noctua NF-A15 was built to be a heatsink fan. So how better to test it than to mount it on Noctuas premiere heatsink, the NH-D14? The test setup in the table is completely passive except for the fans on the NH-D14. The motherboard was mounted on a removable motherboard tray so it could be set up vertically.

Only Noctua fans were tested. First there is a pair of stock fan sets for the NH-D14, each comprising an NF-P12 and an NF-P14. Then there were the PWM fans: a pair of NF-A15s, a pair of NF-F1s, and an NF-P12. The part numbers for the LNA adapters are shown in the table below.

Thank you to Noctua for providing the PWM fans for testing.

The chart below shows the results of the testing. Note that the numbers following the fan names represent the average RPM observed for each fan. Sound Pressure levels were measured one meter from the motherboard. The basement measured 30.5 dB(A) with nothing going  it sounds silent at this level  so anything that measured that low may well have been quieter. 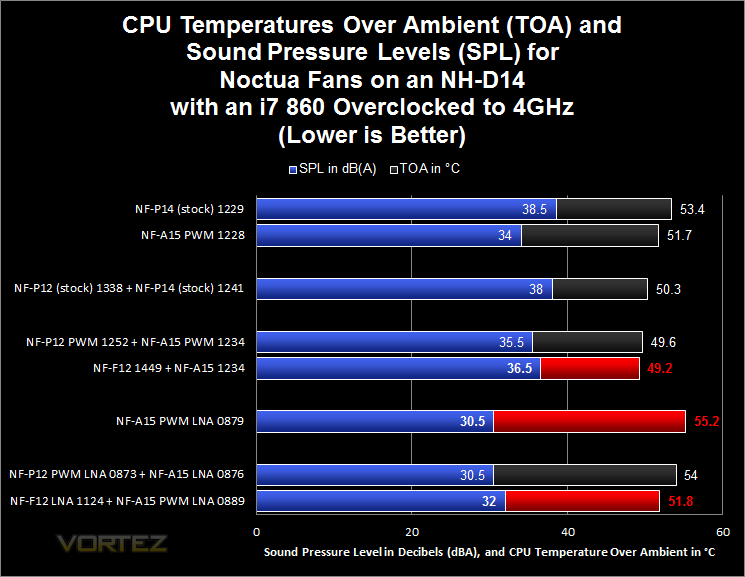 First, cooling power and noise were measured and averaged for pairs of the NF-A15 PWM and its predecessor, the Voltage-controlled NF-P14 that comes supplied with the cooler. Then the two sets of the NF-P12 and the NF-P14 were measured and averaged to show the performance of the stock fans on the NH-D14. Next we compared the performance of the NF-A15 PWM using two PWM fans designed for heatsinks, the NF-P12 PWM vs. the NF-F12 PWM. Last three results show the fans on their Low Noise Adapters.

Finally, the orientation question. When the TY-140 was tested on the same NH-D14, the CPU appeared to be 1-2°C cooler when the fan was oriented with the long axis parallel to the mainboard. No formal testing of was done at the time, however. So, now was a great time to test whether the Noctua NH-A15, with the same dimensions as the TY-140, would the show any difference in cooling on the NH-D14 whether its long axis stuck out from the fin stacks on both sides (long axis parallel to the mainboard), or whether sticking one square side down between the fin stacks would give better cooling. Noctua sent out extra clips so this could be tested.