👤by Ed Hume  Comments 📅29-06-13
Bundle
Noctua A series fans come with a pleasant bundle of accessories. Every one of these fans comes with a 30cm (1 foot) extension cable  4-wire for the PWM fans, 3-wire for the rest. This lengthy extension complements the fact that the fans themselves come with rather short 20cm (eight-inch) cables. So, users have the best of both worlds  short fan cables to keep their cases uncluttered; long extensions when the fans need a lengthy tether  such as when you mount them to radiators.

PWM fans come with 4-wire Y-cables. These are the good kind of Y-cables that only transmit RPM signals from one fan, to avoid confusing your motherboard. The FLX and ULN fans come with Molex adapters that allow you to power the fans directly from the power supply. Since fans powered this way are most likely to be used as case fans, Noctua can be forgiven for not including RPM signals on their Molex adapters. 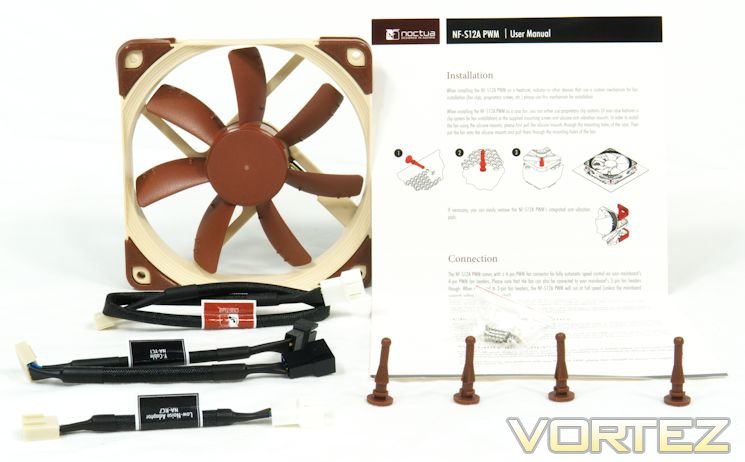 The Low Noise Adapter shown in the foreground of the picture below is a PWM LNA. Note that the tag has a part number on it. All of the accessory cables in this new generation of Noctua fans come with part numbers printed on tags. This allows you to keep these cables straight. But if you have more than one Noctua fan, be sure to label each box with the part numbers of the LNA/ULNA cables it came with. Mixing them up, though not the end of the world, would be unfortunate.

All Noctua fans come with four standard fan screws and four Noctua standard vibration isolators  Noctua calls them Vibration Compensatorsbasically rubber replacements for screws that tend to dampen any vibration that might get transmitted from the fan frames to your case.

Finally, each of these fans comes with a printed insert that tells you how to use it.

There are currently 322 user(s) online:
Google