👤by Ed Hume  Comments 📅19-07-14
Testing Setup
Fans have four performance aspects that can be measured: their speed (usually measured in revolutions per minute, or RPM), the noise they produce (usually approximated by measuring sound pressure level in dBA), the amount of air they transfer (usually measured in CFM) and the pressure they produce when they cannot move air (static pressure, often measured in mm H2O). Since Noctua fans report their RPMs, the speed can be obtained directly from software. dBA and CFM must be measured. The measurement tools used in this review are the Tenma 72-942 SPL meter and the Extech AN100 Anemometer. 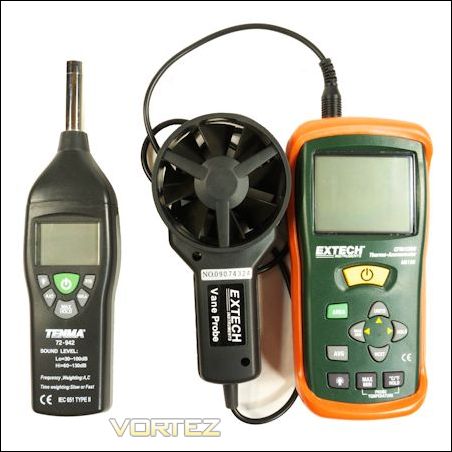 The Tenma is advertised as measuring sound pressure levels accurately down to 30 dBA. Not coincidentally, 30 dB is the SPL when you are in what sounds to you like a silent room. The SPL meter is accurate down to 30 dB, but it will measure quieter sounds. So a large cardboard box was lined with carpet and covered with a moving blanket. But instead of a making a quiet box, the carpet-lined container actually had a SPL inside that was 1  2 dB higher than the quiet basement it was in. And then the air blowing back carried the fans noise to the SPL meter, increasing the fans perceived noise by another 2  3 dBA. So, in the end, an open basement with an ambient SPL of 30.5  31 dBA was the quietest environment in which to measure a fans noise.

These Noctua fans had their SPL measured at 10 cm. A correction was applied to give the equivalent of the industry-standard 1 meter. While this is not a perfect system, it does give you a practical measure of how loud each fan is.

Fans have hubs, so the airflow is annular. The airflow also changes as you get further from the center of the fan. To get a single measurement of the airflow from a fan you must mix the air before you measure that flow. Special testing boxes were made to test these fans, with inlet and outlet holes fitted to each size class. The boxes were large enough to allow enough air-mixing that the outlets had an even airflow. The 80mm and 92mm fan airflow-testing boxes were 6x6x6-inch boxes. The 120mm fans were tested in 6x7x7-inch boxes, and the 140mm fans were in 8x8x8-inch boxes. The fans were all tested with ducts in these boxes. But the ducts distorted the airflow measurements, so the ducts were removed and the outputs of all the fans were measured again. Basically, the theory is that what goes in must come out. You measure what comes out.

In addition to open-outlet measurements, the 140mm and the 120mm fans were also measured with dust filters made from the same metal mesh. The outputs of the 120mm fans were additionally measured as they blew through a radiator with 30 fins per inch (Hardware Labs Black Ice GT Stealth). So we will be able to see how well the larger fans pulled through dust filters, and how well the 120mm fans did that and pushed through a restrictive radiator as well. The results of these comparisons were, shall we say, interesting, and may be surprising.