In fairness to the GTX760 we should have compared it against a ruck of mid-range examples however we wanted to show the benefits of SLI and for that reason we threw it in the mix with the best GPU solutions currently on the market so the FPS graphs should be viewed with this in mind.

NVIDIA told us that the GTX 760 would compare favourably to the AMD HD7950 which we thought was a very bold statement. This claim however is true as the GTX 760 is the better card under most scenarios. At 1920x1080, the GTX 760 and HD7950 exchanged victories however the overall performance at this resolution goes to the GTX760 by a split decision. This victory would be further exemplified were we to pitch the GTX 760 against a HD7950 without Boost technology and without a factory overclock.

When you add in the price factor, the GTX760 becomes even more desirable because on average it is some £30 cheaper than a HD7950, even one with Boost enabled. Tipping the scales at just over the £200 mark, the GTX 760 is priced fairly and it has to be because while the card may be slightly better at 1920x1080, the 1GB of extra memory available to the HD7950 makes it a better option at the highest resolutions with filtering applied. This is shown in our overall results where all resolutions and settings are bundled together to show the faster card overall. To this end, were the NVIDIA GTX 760 more expensive than its AMD counterpart and you wanted to game at 2560x1600 with additional filtering, we would have to recommend the HD7950.

Our frame time analysis showed that the NVIDIA cards offered smoother gameplay too with the AMD card having a few too many spikes which are likely to be interpreted as stuttering on screen. 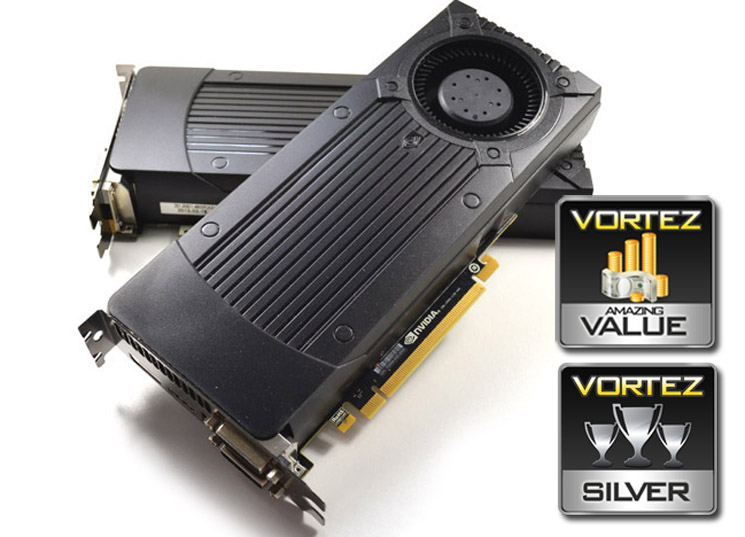 What we haven't mentioned yet is SLI performance and for good reason because here is where we feel the GTX 760 offers the best value against performance. It is the TITAN's equal, betters a GTX 780 yet cost much less than both so if you only intend on gaming at 1920x1080, we so no reason why you would opt for single ultra high end card when the GTX 760 SLI setup is the better option and here is where it offers very good value for money.

We pondered on giving the card our Gold award however, because it lacks the memory to perform equally well at higher resolutions we thought silver was more fitting. Were it on SLI alone, it would get Gold however, we sacrificed this for our value award as the smart gamer who is looking for flagship performance at a reasonable price, a GTX 760 setup simply makes a hell of a lot of sense.

To summarise:
If you are looking for a mid-range card that offers good value and performance to boot then the GTX 760 is worth considering. If however you are yearning for a cheap SLI setup then the GTX 760 is a flagship killer that can hold its own with the very best GPUs out there....and then some!