The first thing to note is that the GTX 780 Ti model has the largest number of stream processors, closely followed by the AMD R9-290X. The TITAN closely follows these models with the standard GTX 780 bringing up the rear. The green team far outweighs the 290X in terms of texture units however the 290X does have 16 more ROPs than all the NVIDIA cards who have 48 each. Memory speed goes to the GTX780 Ti with a huge 1750MHz (7000MHz effective GDDR5) while the TITAN has the most memory (6GB) with the 290X having the higher bus width of 512bit. Both the GTX780 Ti and TITAN have a faster fill rate than the 290X while the 290X has the faster Pixel fillrate. All four cards are based on the 28nm process. 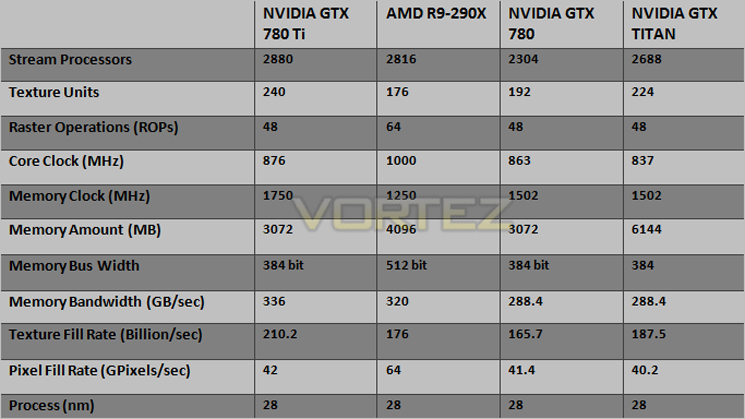 The R9-290X also uses more power at peak vs. the GTX780 Ti. The 290X has to work harder at dissipating this heat because of a smaller die size (455 square mm). Because of this higher thermal density the 290X runs hotter and therefore needs an efficient cooler be that a very fast fan speed (noise) or huge heatsink (cost). While AMD are to be applauded for cramming so much into such a small sliver of silicon, the NVIDIA method results in a more efficient design from a cooling perspective. Because the chip is cooler, less heat dissipation is required and therefore ultimately it can utilise lower speed fans which in turn equate to less noise (see our acoustic testing section). The R9-290X has a nominal operating temperature of 95c which is much higher than the GTX 780 Ti's of 83c.

Here is a full breakdown of the GeForce GTX 780 Ti specification:

So, on paper the GTX780 Ti appears to have the slight advantage over both the TITAN and the AMD R9-290X. All three cards however have advantages in different areas so it is going to be a very close run race.

There are currently 125 user(s) online:
Google