The GeForce GTX 780 Ti is one of those cards that just make you grin from ear to ear. From the outset, we were impressed by the performance and even though this is a reference design, it is both cool and quiet and in a side-by-side comparison with the R9-290X, looks so much cleaner, better engineered and an all round more 'professional grade' graphics card.

Everything about the NVIDIA product screams professional from the top of the company down to the product itself. To be fair to AMD, they too have an excellent product on their hands but sadly the presentation both to the media and public was found to be wanting. Aesthetically and acoustically, the NVIDIA GeForce GTX 780 Ti is miles ahead of the R9-290X. But which graphics card is fastest? We found the GTX 780 Ti to be on average faster, cooler and much quieter than the R9-290X. Not only that but it betters the GTX TITAN and overclocked examples of the GTX 780. NVIDIA have played a very good tactical game by allowing AMD to grasp a taste of glory only to unleash the Ti version of the formidable GTX 780 to douse any aspirations of grandeur the AMD 290X may have had. The one stumbling block, as always with most flagship cards is the price. 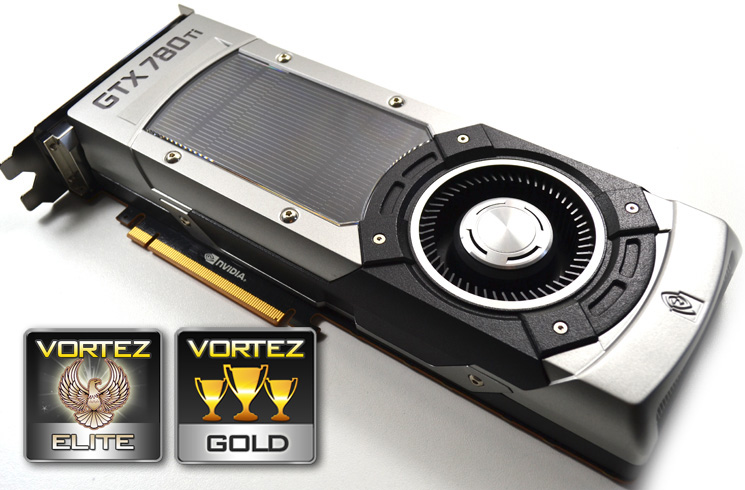 Weighing in at £559 it is much cheaper than the GTX TITAN. At this price the TITAN just doesn't make any sense at all so you could be forgiven in thinking NVIDIA have shot themselves in the foot here. Of course we would agree that for anyone to buy a GTX TITAN now would need their heads examining because the GTX 780 Ti is both faster and a lot cheaper. The GTX 780 Ti does however prove to be over £100 more expensive than the AMD R9-290X. Is this price justified? We think so, just. While we would have preferred to have seen the price drop below £500 we are happy it is sub £600. Were the 290X not so aggressively priced the GTX 780 Ti would actually seem quite reasonable compared to both the TITAN and overclocked GTX 780 variants. The simple facts are that the GTX 780 Ti is faster, cooler and quieter than AMD's flagship card. You don't buy a flagship GPU to save money, you buy one because it is the fastest money can buy and there can be no arguing that at the time of writing, the GTX 780 Ti is simply that: The fastest single core GPU available today.

In summary, the NVIDIA GeForce GTX 780 Ti is faster than both the AMD R9-290X and the GTX TITAN. It currently stands as the fastest single core graphics card on the planet bar none. Go buy it!