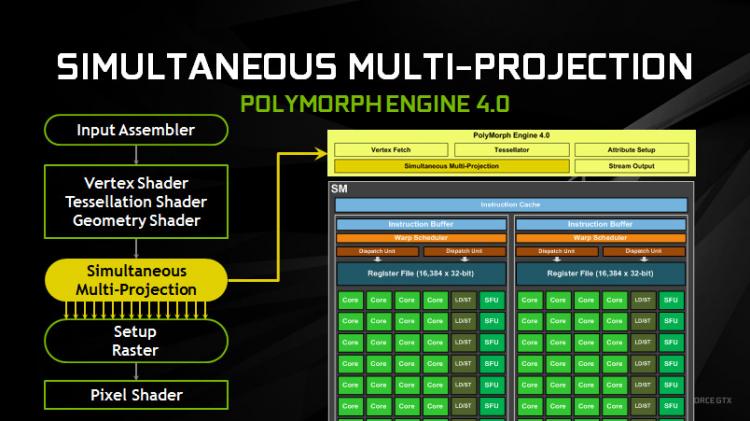 One component of their GPU architecture which NVIDIA revised significantly in the transition to Pascal is the PolyMorph Engine, which it now in its fourth iteration. In order address display issues for curved monitors and VR HMDs, a concern for the current generation of graphics hardware, PolyMorph Engine 4.0 integrates a feature known as Simultaneous Multi-Projection (SMP).

Unveiled with the launch of the GTX 1080, and a core component of the Pascal architecture, SMP is located at the end of the geometry units within the PolyMorph Engine, just ahead of the Raster units. Its function is to allow simultaneous rendering of graphical primitives into up to 16 different projections of the same mono or stereo viewport.

Thats a little wordy, but in essence it breaks down a single view into up to 16 views that are slightly apart in angle but focus at the same distance. By knitting these together the overall image has a curved aspect which can more closely match that of a curved monitor, or even compensate for angled monitors in a multi-monitor display. No longer would a curved display have skewed perspective due to mapping a flat image to a curved display. By performing this simultaneously frame rates are more consistent and higher overall, a crucial requirement for VR.

SMP is currently being integrated into both Unreal Engine 4 and Unity, so whilst its not currently a part of any game on the market its a tool which a legion of developers will have access to. Thirty games are in already development with SMP capability including Unreal Tournament and Adrit, whilst the Everest VR tech demo also leverages the technology.

The release of 2nd generation Maxwell GPUs in 2014 saw the implementation of a much-touted improved Delta Colour Compression technique. Described as a 3rd generation lossless method of color compression, it increased the effective memory bandwidth available to the GPU by as much as 30% compared with Kepler.

Pascal, including the GTX 1060, sees the next iteration of NVIDIAs delta color compression algorithm. Both 4:1 and 8:1 modes have been added to the architectures repertoire, adding an estimated 20% additional effective memory throughput. This in particular will compensate for the slightly reduced memory bandwidth of the GTX 1060 compared with the GTX 980, and unlock higher performance at high resolutions and texture qualities.

Announced alongside Simultaneous Multi-Projection, Ansel and VRWorks have both been discussion previously and are now available in a limited release. Both these tools are compatible with older architectures, but the performance and specific features present in Pascal will make the latest generation of cards the most suitable. 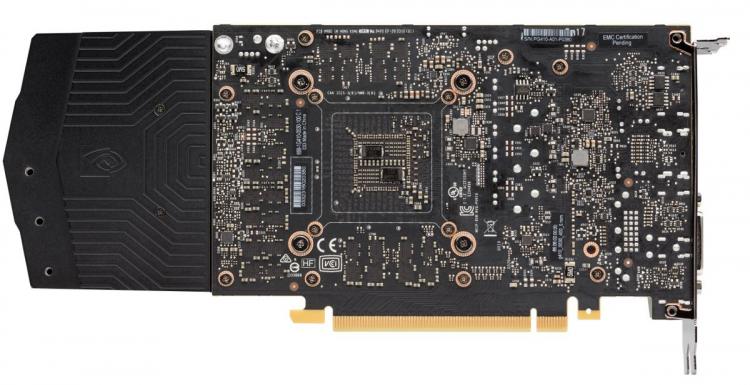 Those tuned in to the GTX 1060s pre-release coverage will be well aware of one of its most controversial feature omissions, but we should reiterate for the uninitiated: the GTX 1060 has no SLI connector, and hence doesnt support NVIDIA SLI. It does however support DirectX 12 MDA Mode or LDA Explicit for multi-GPU configurations where implemented by software developers.

The GTX 1060 has the same TDP as the GTX 960 before it, and similarly relies on a single 6-pin PCI-E power connector when in its reference configuration. As a result upgrades from this card and most mainstream gaming design from the past five years will not require a PSU upgrade, and this is reflected in the GTX 1060s 500W PSU recommendation*.

NVIDIA have equipped the Founder's Edition model with a blower cooler design functionally similar to that of the GTX 1080 and 1070 Founder's Edition, although the shortened PCB did necessitate a slight modification. Unlike reference 2nd Gen Maxwell cards NVIDIA have extended traces to the rear of the cooler to relocate the PCI-E power connector, making installation in most systems both easier and better looking. This modification will be a problem if you intend to remove the cooler and replace it with a bespoke solution.

Including the cooler the card is 9.8" long, but the short PCB makes it clear that compact variants from partners for small form factor systems are guaranteed.

* As usual, we recommend that users purchase quality PSUs from respected manufacturers including Corsair (who we should disclose supplied the PSU used in our testing system), bequiet, Antec, SilverStone, Seasonic and more. Power is less important than reliability and safety, even if it means spending a few more pounds.