GTX TITAN in disguise? You would be right to think so. While the GTX780 does have some fat trimmed from it, losing 2 SMX it is much closer to the GTX TITAN than the GTX 680 GPU it replaces both in terms of aesthetics and performance. We have continually compared the GTX780 to the GTX TITAN rather than the GTX680 it replaces throughout this review for this very reason. We have sympathy for those who broke the bank to pay for the GTX TITAN when a short time later a card with a small performance drop but £300 saving hits the scene. The GTX TITAN is STILL the fastest single core card available right now though so there is still exclusivity in that model but the cost of the flagship GTX TITAN became that little bit harder to justify.

At £550 the GTX780 is certainly not cheap, far from it costing over £150 more than the outgoing GTX 680 did a little more than 12 months ago. Is this justified? We don't think so. Yes it looks great, yes it performs brilliantly, even more so when overclocked but even with the usual NVIDIA premium, £550 is a bitter pill to swallow. We could understand NVIDIA charging a premium for the GTX TITAN as it is an exclusive, premium card, created for the 'ultra enthusiast' market. The GTX780 we would like to think, is the workhorse of the family. The high end card that is within us mere mortals grasp. Sadly, if the current price hike every year is to continue, it won't be long before the high end 'family' GPU's are out of reach never mind the 'exclusive' graphics cards. 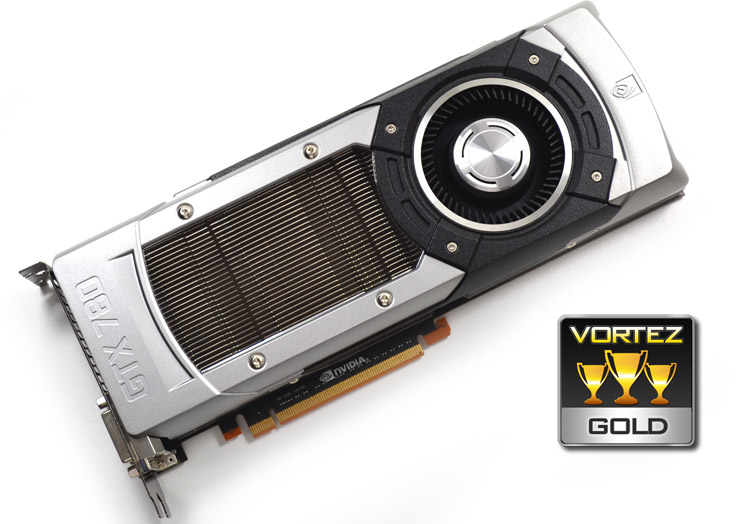 Giving the GTX780 our Gold award was a difficult decision. On the one hand it has astonishing performance but, as we have repeatedly suggested, this performance comes at great cost. Were the price to match that of the outgoing GTX680 the GTX780 could well have been a platinum winner as it is truly a fantastic card however, because of the price hike we feel justified in knocking this down to a Gold. Many will complain that it doesn't deserve Gold either because of the cost but when you factor in the cost vs. performance of the current GTX680 and also include the GTX TITAN and GTX 690 models in the same formulae, the GTX780 strikes a fair medium.

To summarise:
The GTX 780 is a formidable GPU. It surpassed our expectations in respect to raw power and while the cost will be an issue for many, those who can afford such a luxury will be impressed by everything this card possesses be it overclocking prowess, aesthetics, acoustics or simply its awesome performance.

There are currently 638 user(s) online:
Google