By stepping down NVIDIA's lineup just a little we reach the GeForce RTX 2070 SUPER. Outwardly this card is another straightforward in-line replacement for its vanilla variant, but there's quite a lot going on when you look more closely (some of which NVIDIA are strangely reticent to discuss).

The RTX 2070 SUPER is promoted to utilise the TU104 rather than TU106 GPU at the heart of its vanilla series counterpart; quite understandable given the RTX 2070 fully utilised that lesser GPU.

A TU104 is equipped with up to six Graphics Processing Clusters, each with eight Shader Modules. An SM has 64 CUDA Cores alongside other components such as Tensor Cores and RT Cores, so in theory a TU104 could have up to a total of 3072 CUDA Cores enabled. The RTX 2070 SUPER has 2560 enabled (up from 2304 on the RTX 2070) representing a total of 40 SMs of the 64 available. Normally one would assume therefore that the RTX 2070 SUPER has five of the TU104's six GPCs unlocked. 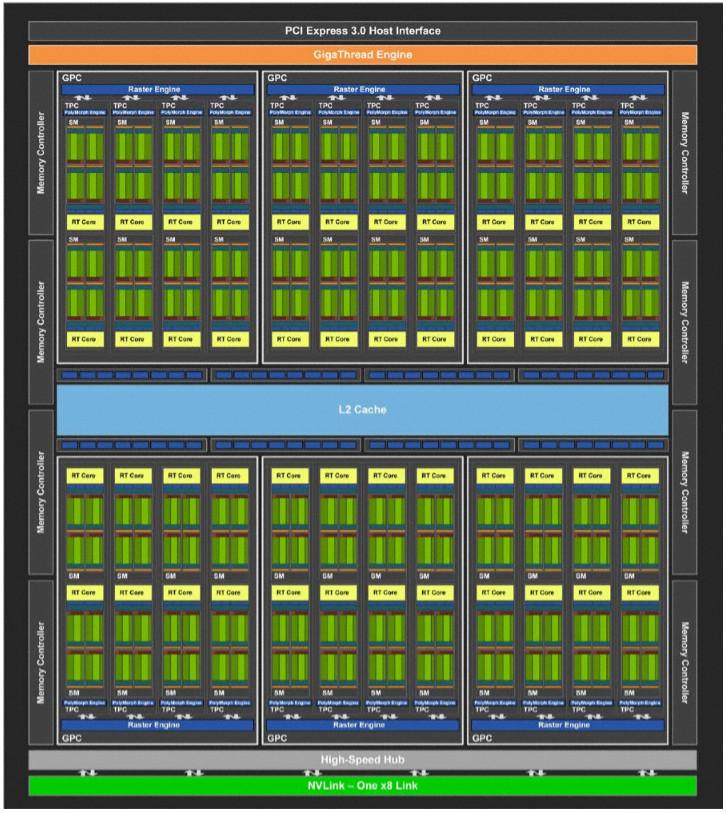 Strangely however NVIDIA's technical specifications list the RTX 2070 SUPER as incorporating '5 or 6' GPCs, implying some variance between the configuration of particular RTX 2070 SUPER GPUs. We asked NVIDIA if this implied there would be multiple variants of the RTX 2070 SUPER (perhaps as different SKUs) and this was their response:

"The are no [SKU] variants, it is just a function of how we select the chips. We have done extensive game testing and there is no difference between 5 or 6 GPCs in the results."

Given the minor kerfuffle caused by the binning process of the RTX 20-series, it will be fascinating to see how this particular incongruity plays out.

Other improvements from the RTX 2070 include higher Base and Boost clocks and a greater number of texture units. Boost Clocks in particular will differ between the Founder's Edition and partner models due to differences in the power delivery infrastructure and cooler. Overall, NVIDIA expect the RTX 2070 SUPER to be up to 21% faster than the RTX 2070, with an average of 16% better FPS across a wide sample of titles.

Sitting at a new price point for the RTX 20-series is the GeForce RTX 2060 SUPER, a $399 MSRP graphics card that bridges the price and performance gap between the RTX 2060 and 2070. Unlike the RTX 2080 & 2070 SUPER cards however it doesn't displace or make obsolete any particular model; instead it seems tailored to compete with the AMD Radeon RX 5700.

The TU106 once again returns but with more SMs unlocked compared to the RTX 2060. Just as significant is an increase to 8GB of GDDR6 memory which now operates over a 256-bit wide bus, helping the cards capabilities at higher resolutions and image quality settings. Base operating frequencies are higher - now up to 1470MHz - but in an interesting twist Boost Frequencies are a little lower at 1650MHz.

In combination these changes should see the card be far more accomplished at 1440p than its predecessor, and hence be a much more attractive upgrade path for GTX 970/1060 owners than the RTX 2060 turned out to be. If the Boost frequency are in fact relatively modest then it could give NVIDIA's AIC partners an opportunity to really flex their muscles and push the card to rival the RTX 2070.