👤by Sahil Mannick  Comments 📅30-06-11
Conclusion
NZXT have done a tremendous job with their Havik 140. They have settled on a relatively simple heatsink design that has proven to be effective countless times. While most manufacturers do tweak the fins to maximise airflow, NZXT have gone for a planar array of fins akin to the Thermaltake Frio. As such, the heatsink is reminiscent of many other successful single tower heatsinks. The six heat pipes are arranged very similarly to the Thermalright Archon and the dimensions are strikingly similar to the Venomous X. Like the Archon, the Havik also supports 140mm fans that come with 120mm mounting holes. The mounting mechanism resembles those employed by both Prolimatech and Thermalright so NZXT have drawn inspiration from the right people.

In reality, the design paid off. NZXT have to be commended for bundling two very unique fans with their heatsink so users are not left the trouble of having to source some themselves. They are quiet and perform decently, enough to allow the Havik to beat the Archon in their stock configurations. Even changing the fan configurations demonstrate that the heatsink is more efficient than the Thermalright Archon. Choosing between the two requires more than a performance break down though because both solutions have their pros and cons. The Havik is shorter and thus faces less compatibility issues in mid tower cases. On the other hand, the Archon is cheaper and can easily be upgraded by adding a second fan, allowing it to beat the Havik and still remain the cheaper solution. Memory compatibility is the same for both, overhanging only the adjacent slot on our X58 platform. 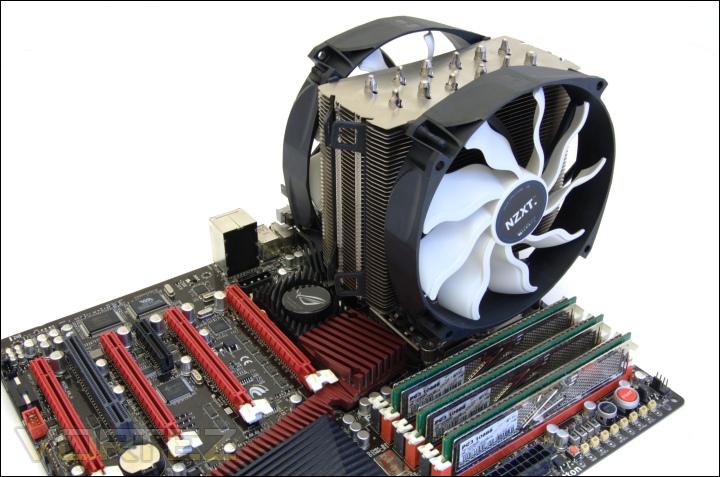 All in all, performance was very good. It failed to match the Venomous X or the Super Mega but it still boasts many features that will appeal to buyers. The two fans operate very quietly, and installation was second to none. The inclusion of the rubber adapters instead of metal clips proved to be a wise step as it made fan installation quick and painless, and furthermore helping to reduce vibrations. And lastly, the Havik 140 is one of the best looking coolers to have landed in our hands, following NZXTs trend of delivering very stylish cases.

The only two downsides are the cost and fan performance. The Havik fan fell behind Noctuas popular NF-P14, which itself is less favourable than Thermalrights TR TY-140. At $74.99/69.99 Euros/ £60, the Havik retails at the upper end of the traditional air cooler price bracket, a market that is out of reach to most users. Enthusiasts who seek coolers in this bracket can opt for the superior Silver Arrow at £50 or the NH-D14 for around £65. Those interested in single tower heatsinks will find the Venomous X for under £40, and the Archon with an additional 140mm fan ends up less than £55. For the Havik 140 to be more competitive, NZXT need to price it at £50.

**Pricing update**
After having a browse on American etailors, the NZXT Havik appears to be cheaper than its main competitors and more in line with what we were expecting. If the UK/European pricing can come down, it will be more easily accepted into the market.

To summarise, NZXT have done a fine job on their first attempt at an entering the enthusiast air cooling market. It is certainly a highly competitive market that many fail to break into successfully and NZXT have taken a very comfortable first step. I look forward to seeing more high-end solutions from them in the future.