👤by Matthew Hodgson  Comments 📅09-07-19
Conclusion
This is the first system weve reviewed that uses the Intel Core i7 9700K, a chip that is well regarded amongst the community for its gaming prowess at a substantial cost saving against the i9 9900K alternative, however, with the recent emergence of the AMD 3000-series CPUs, particularly the AMD Ryzen 7 3700X, that claim has seemingly been thrown into disrepute and you may find yourself better served, in both terms of outright CPU power and longevity by investing into an AMD CPU. PC Specialist will have you covered on that front.

Appearance considered, the SR-628B chassis looks good, its not too in your face but does boast plenty of internal RGB lights. The black motherboard, GPU, RAM and CPU cooler all tie in very well inside the system and with the PSU/HDD hidden away behind a shroud, the mess of cables at the bottom is out of sight and out of mind. The magnetic dust filter on top of the case is handy, too.

With the systems title containing the term Powered by ASUS (PBA), it was no surprise to find it decked out with an ASUS ROG STRIX motherboard and graphics card; that is by no means a poor choice though. The STRIX range of motherboards have been proven to be popular amongst overclockers and enthusiasts. The triple-fan cooler on the GPU is beefy and does an excellent job of keeping things cool while gaming. The Corsair H100x CPU cooler is also plenty capable of ensuring low temperatures on the Core i7 9700K, with no more than 68°C measured during our testing. PC Specialist equipped the rig with 16GB of DDR4, clocked at 3000MHz, meaning multi-tasking and gaming will be no issue at all, but they seem to have gone for style over function and used 4x 4GB modules instead of 2x 8GB. The latter option would serve as a better option for future upgradeability, if, or more likely, when applications and games begin to push the boundaries of 16GB of system memory.

With a 500GB Samsung 970 EVO Plus NVMe M.2 as a boot drive, backed up with 2TB of mechanical storage, youre unlikely to run into any capacity issues early on. System start up times are as fast as they come at the moment thanks to the Samsung NVMe, game load times will also benefit from the drive if you install onto it.

At £1649, the PC Specialist Vulcan PBA offers plenty of performance, remains cool and quiet, looks good and is backed by their 3-year standard warranty for added peace of mind. 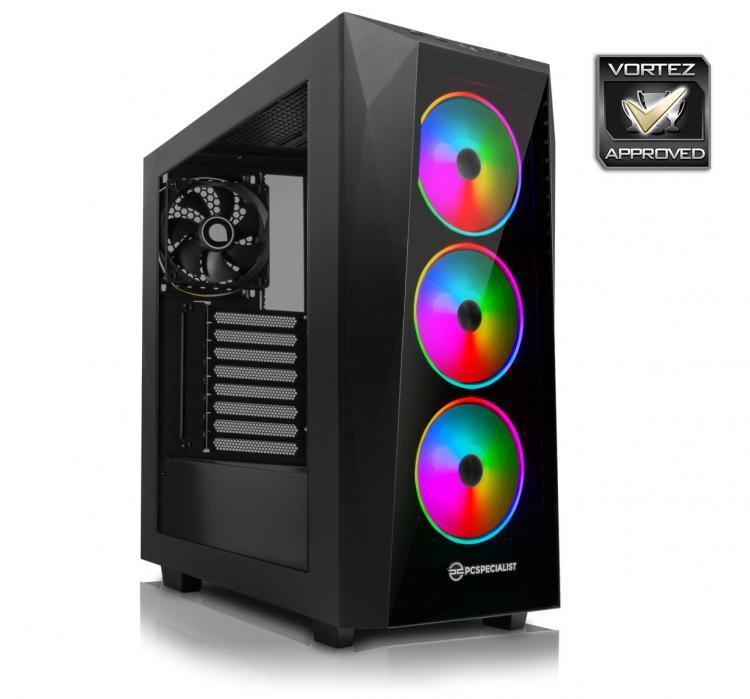 If youre an Intel and NVIDIA fan, the Vulcan PBA will definitely serve you well, though wed have to suggest you at least consider an AMD Ryzen 3rd Gen. system for further futureproofing.