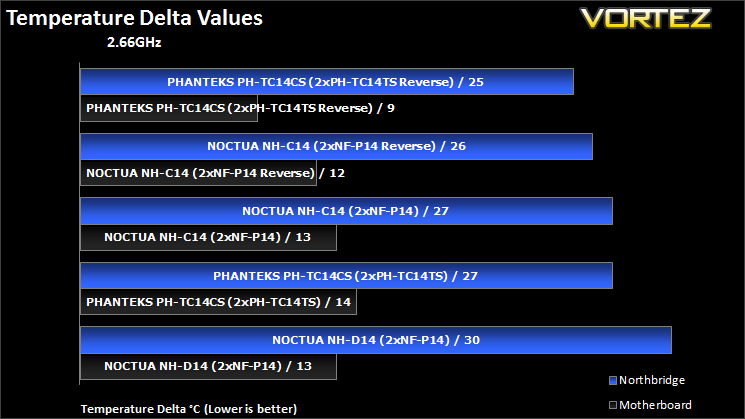 One of the advantages of using top down coolers is their ability to cool surrounding components on the motherboard. The Phanteks proves to be more effective than the NH-D14 at that as expected. Compared to the NH-C14, both are on par. Reverse mode is more effective as hot air is not being pushed down onto the motherboard but instead, it is being exhausted out.

Unfortunately, we dont have the results of the NH-C14 in this situation but the remaining results still highlight the effective of the PH-TC14CS at cooling the Northbridge and motherboard. Again, reverse mode proves to be more effective.

Compared to the samples we first received from Phanteks, the fans bundled with the PH-TC14CS were acoustically inferior to our previous experience despite the fan speeds not changing. At full speed (1200RPM with PWM adapter), the fans were slightly audible even from inside the case. Compared to the NF-P14s, there was a noticeable difference in noise level favouring the Noctua. Thankfully, no mechanical noise was detected and as such they remain very good units providing excellent airflow. Naturally, the fans were inaudible at lower RPM.