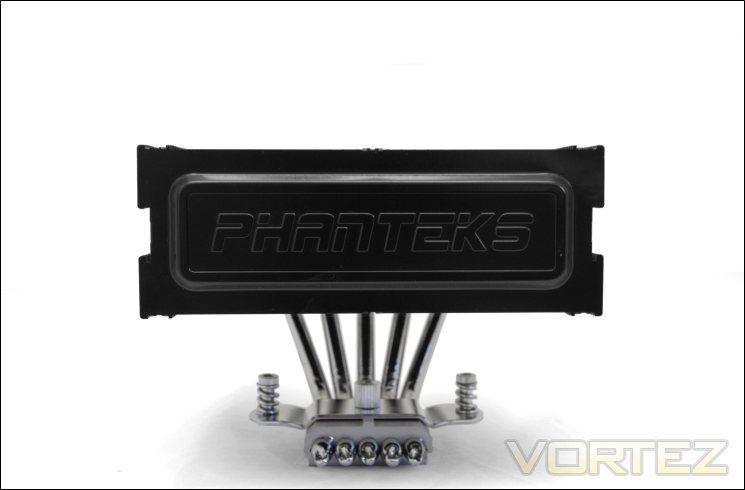 The front of the heatsink
From the front, we see the clinical finish of the Phanteks PH-TC14CS. The Phanteks logo has been clearly imprinted on the top cover which serves to dually improve aesthetics and to hide the end of the heat pipes. The heatsink sits approximately 62mm high from the ground. The black finish on the top cover is slightly glossy, in contrast to the rest of the fins which are matte in comparison. 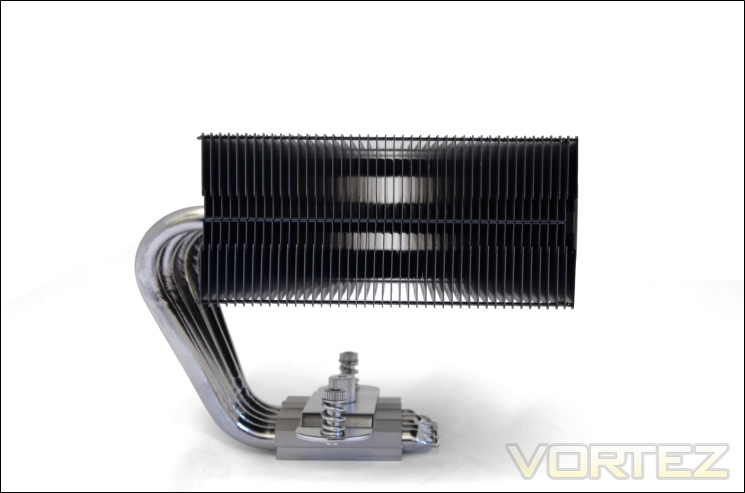 The side profile
From the side, we can see more clearly that each fin is laminar and perfectly flat. The heatsink is 49mm in thickness, no different to the PH-TC14PEs from which it is sourced. 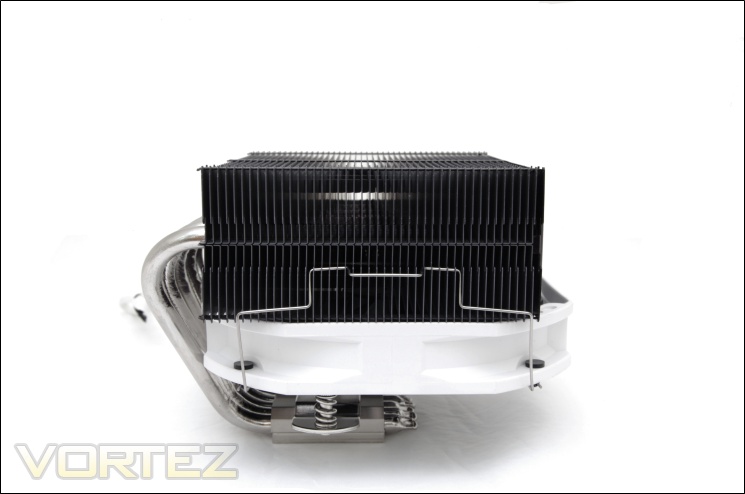 The side profile with 1 fan
With the fan attached in low profile mode, the ground clearance is 37mm. From this angle, we can see that the heat pipes bend straight towards the base with little afterthought given to how the fans can be accommodated. As such, the fan cant be positioned to cover the surface area of the heatsink evenly and ends up protruding forward slightly. Although the 140mm is still enough to fully cover the heatsink, the protruding front means that some of the airflow is wasted. The Noctua NH-C14 on the other hand overcomes this problem by having a longer heatsink. 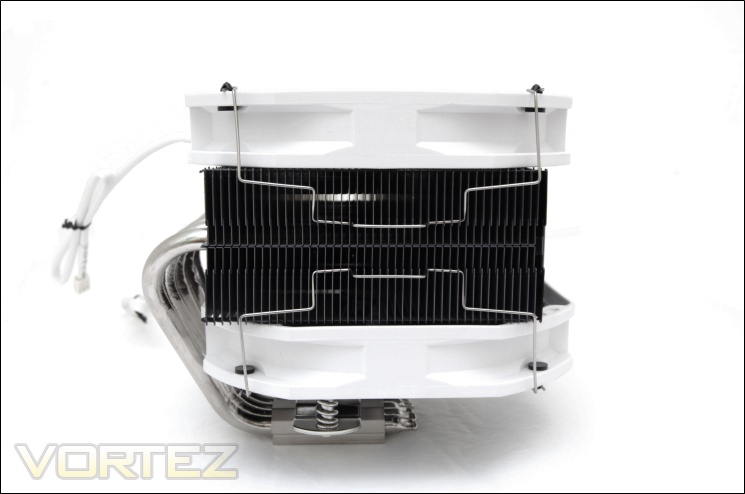 The side profile with 2 fans
And with both fans attached, the cooler still remains fairly compact. 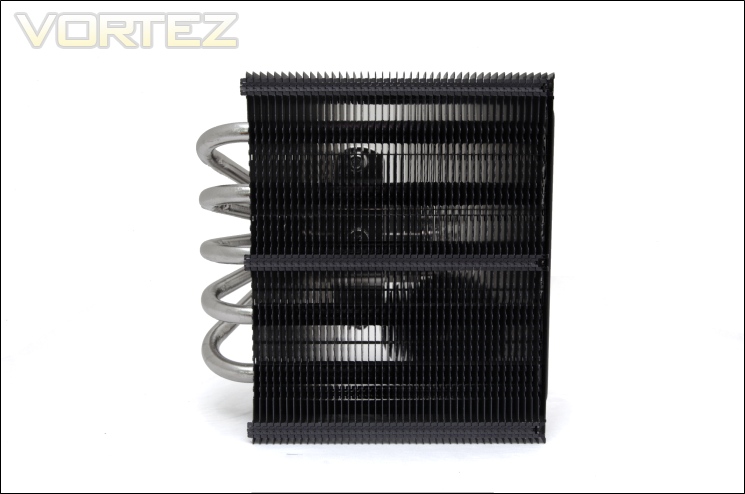 The fin array
The single radiator on the PH-TC14CS is built up of 44 stacked laminar fins perfectly parallel to each other. This is akin to Noctuas design as opposed to Thermalrights, who design theirs with bent winglets to generate more turbulence. In total, the heatsink is made of 44 fins 49x140mm in size with each separated by 2.5mm. This makes the total surface area of each fin 6890mm squared. The fin array has bent clips interlocking running along the edges and the centre. 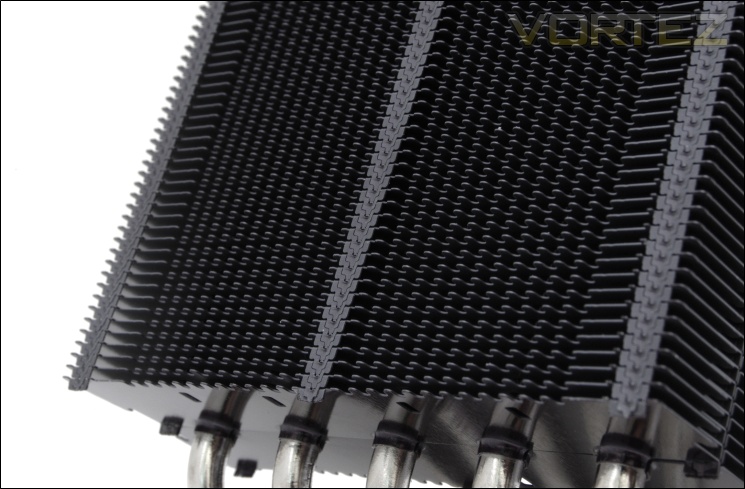 The fins
Lets take a closer look at the fin. Again we see very strong resemblances to the Noctua NH-D14 fins. The edges are serrated to generate more turbulence which when coupled with the focussed airflow of the PH-F140TS fans improve heat transfer. Those serrations are more rounded on the Phanteks than they are on the Noctua which may increase the desired effect of turbulence. Another observation when we look at the base of the fins is that they are made of two halves soldered/connected along the centre seam. The Phanteks PH-TC14PE features Physical Antioxidant Thermal Shield patented technology which aims to increase the cooling performance while deflecting thermal radiation for other nearby sources. Regardless of how accurate this is, the PH-TC14PE proved to be very efficient with this feature so we expect the same to be true of the PH-TC14CS. 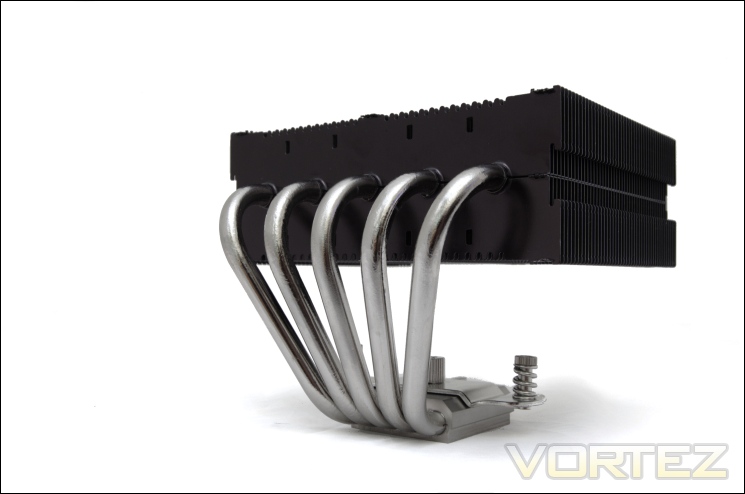 The heat pipes
The PH-TC14CS makes use of five substantial heat pipes, each 8mm in diameter. Not only are these helpful in giving more efficient thermal transfer, but they also hold the weight of the heatsink. 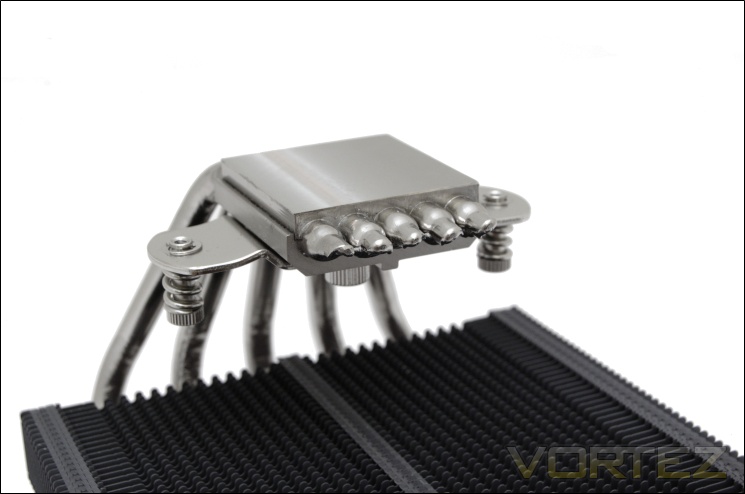 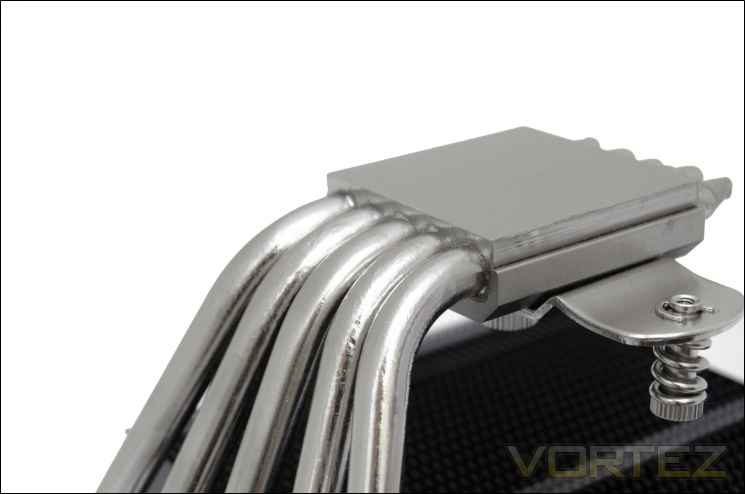 The heat pipes at the base
Cold Plasma Spraying Coating Technology (C.P.C.S) enhances thermal conductivity on the soldered surface between the heat pipes and the base plate.