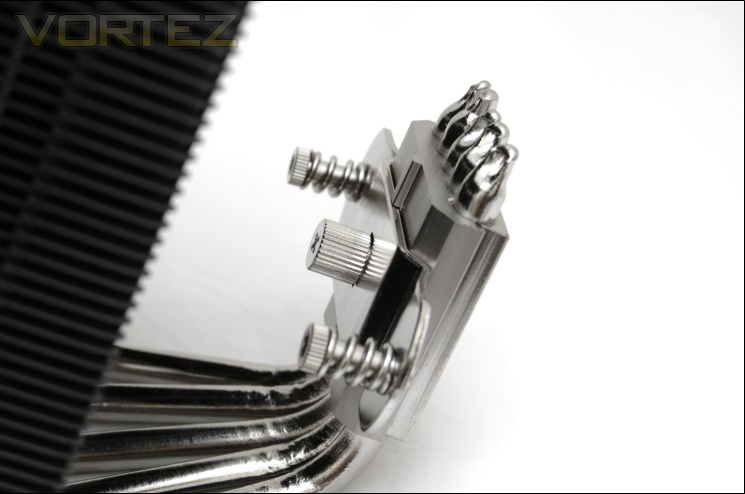 The integrated mounting bracket
At the base, we see that Phanteks have pre-installed the mounting bracket to save time during installation. It certainly makes the process easier but as we will see later on, it has it flaws. 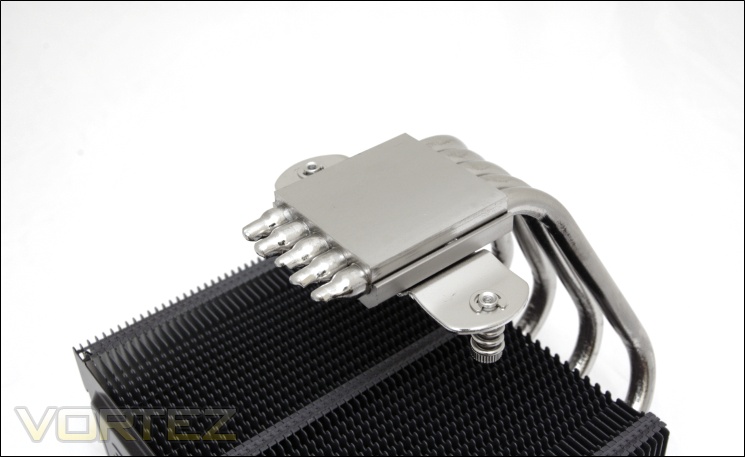 The base of the heatsink
The base is made of solid copper that has been nickel plated and houses the five copper heat pipes. We observe how the finish is very clean unlike some coolers where the contact between heat pipes and base isnt perfect. 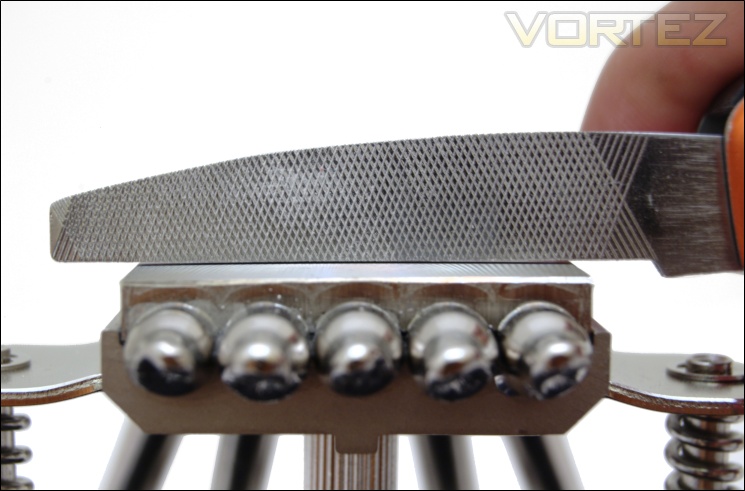 The flatness of the base
The base of the cooler is ever so slightly convex. When installing the cooler however, it did an excellent job spreading out the thermal paste after applying a tiny blob. This tells us that the heatsink makes excellent contact with the CPU to maximise heat transfer. As before, its worth noting that the soldering techniques used by Phanteks ensure the best contact between heat pipes and base plate to minimise heat transmission loss. 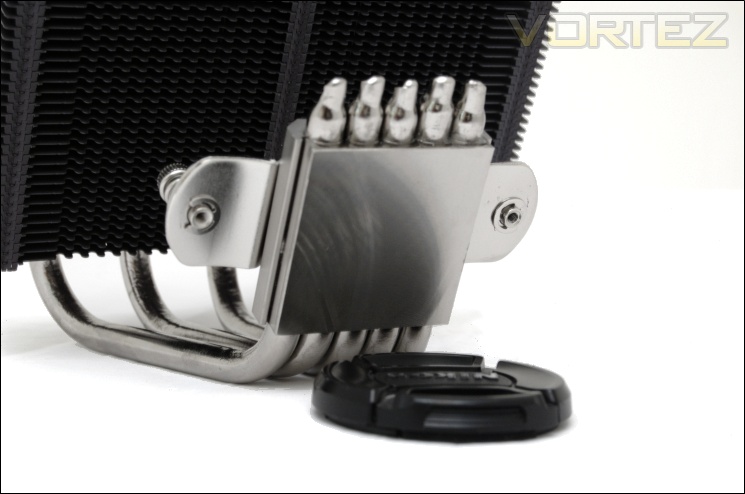 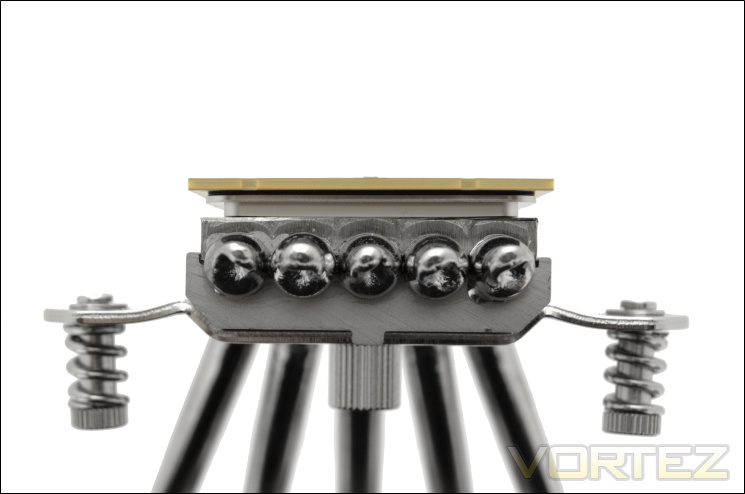 The base plate and CPU
One worry with numerous thick heat pipes is that they may not overlie the actual CPU and thus be wasted. To alleviate the problem, a copper block housing the heat pipes becomes more efficient as heat from the CPU can spread out regardless of its size. This is a far more efficient and flexible design than direct heat touch technology in such situations. Some may argue that the contact between the heat pipes and the base wont be perfect and may create gaps but this is why Phanteks employ C.P.C.S technology. Nonetheless, lets take a look at the size of the PH-TC14PEs base and the largest CPU on the market currently; the Sandy Bridge-E i7 3930K. The base of the heatsink is 44.5x42mm and the corresponding dimension of the CPU IHS is 37x38mm. Westmere based i7 Processors have an IHS 32x34mm is size for comparison. Despite the large size of the base, we see that all five heat pipes overly the CPU perfectly. Mainstream CPUs tend to be much smaller in size but we want to demonstrate that the PH-TC14CS is perfectly suited to even the largest processors. 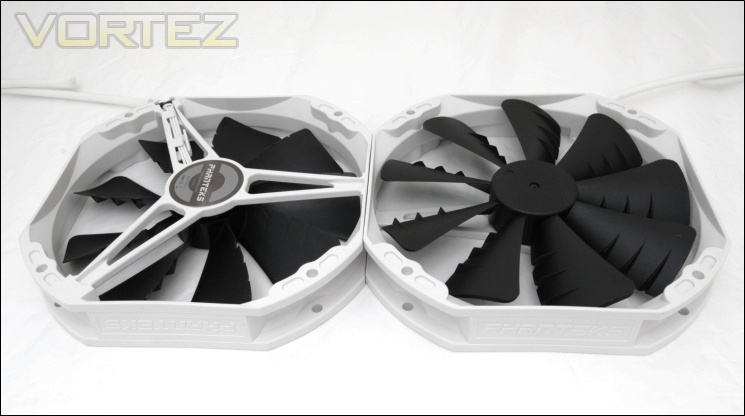 The fans
The bundled Phanteks PH-F140TS fans are octagonal in shape, the corner edges being more rounded. The nine bladed fans are 140mm in diameter and similarly to Thermalrights TR TY-140 and Noctua NF-P14s, the fans use 120mm mounting holes. Unfortunately, no 140mm mounting adapters are provided even when bought separately. The fans feature a number of new technologies such as UFB bearings and MVB. The Maelstrom Vortex Booster refers to the notches on each blade that help generate a powerful focussed airflow. This is attained by producing high pressure vortices which then cause a downdraft as surrounding air is encouraged to flow through the heatsink. At the back of the fan, we see the 3 triangular strands supporting the rotor and fan to the frame.

The fan features a 3 pin fan connector but speed control can be achieved using the newly bundled PWM adapters. Although they reduce the maximum RPM of the fans slightly, the ability to control the speed is far more advantageous. The cable is very nicely braided boasting a dense weave that perfectly hides the three cables inside. The cable has a rubberised texture for durability. At each end, the braiding is tied using heat shrink and one end is clamped at the edge of the fan to make sure the braiding cannot be pulled off. Furthermore, the cables themselves are white for a perfectly neat finish. 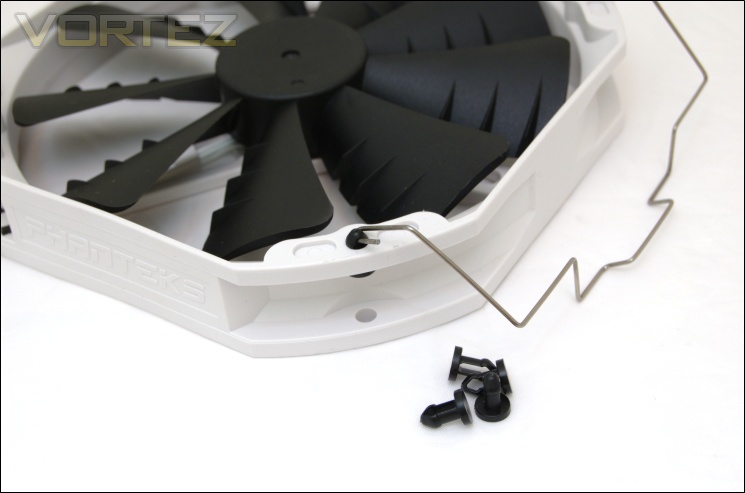 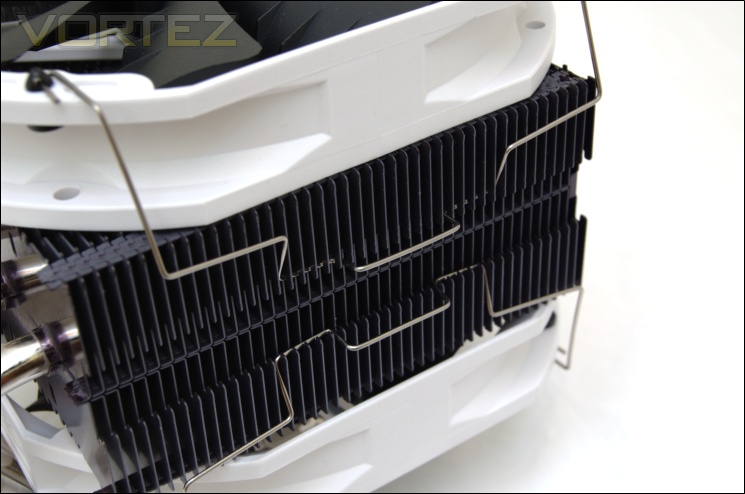 Mounting the fans
To mount the fan, simply insert the ends of the wire clips into the rubber fan adaptors and clip the centre handles onto the side heatsink grooves. The best way I found to insert the wire clips into the rubber adaptors was to have the ends facing inwards and sliding them into the holes, followed by 180 degrees rotation into place. The process was very simple and worked slightly better than Noctuas method despite the two being similar. One complaint is that the rubber adaptors were too small for some fans so the mechanism is limited to fans with open end and with thin outer casing. As such during testing, elastic bands had to be used to secure Noctua 120mm NF-P12s and Coolinks SWiF-120P.