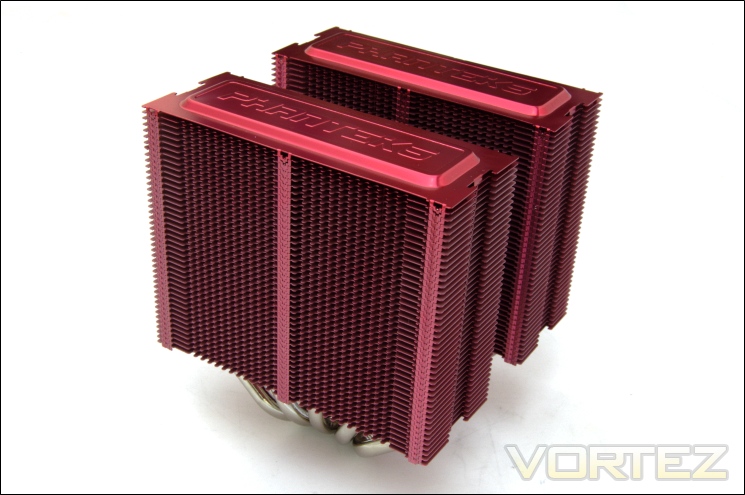 The red Phanteks PH-TC14PE
The Phanteks PH-TC14PE is a visually striking cooler, not surprisingly because of its unique red coated finish. The cooler comes in four different colours; white/silver, orange, blue and red to appeal to a bigger audience. With the surge of people now getting all black motherboards, it would be good to see Phanteks create a black variant. Onto the heatsink, we can see its monstrous size as a result of its dual radiator design. Despite that, the cooler is very attractive and boasts quality. The construction feels very solid and the perfectly stacked fins give the cooler a clinical finish. What surprised me is that the red coating never got damaged during installation even after knocking it with my screw driver several times. 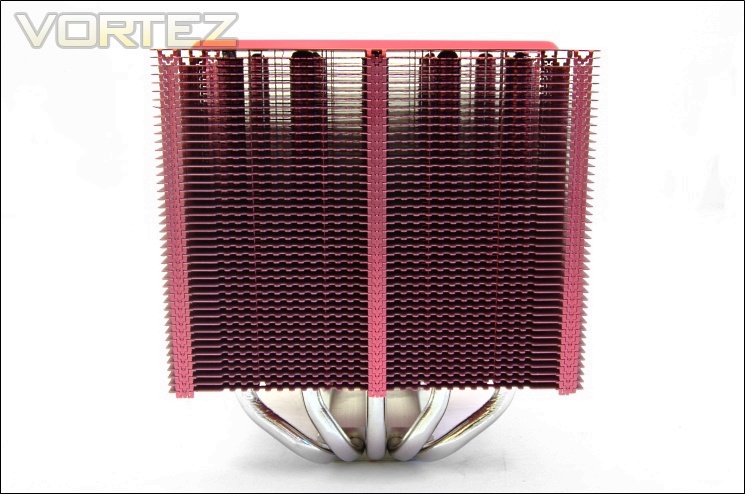 The front face of the radiator
A single radiator on the PH-TC14PE is built up of 44 stacked laminar fins perfectly parallel to each other. This is akin to Noctuas design as opposed to Thermalrights, who design theirs with bent winglets to generate more turbulence. In total, the heatsink is made of 88 fins 49x140mm in size with each separated by 2.5mm. This makes the total surface area of each fin 6890mm squared. In comparison, the Thermalright Silver Arrow is built of 110 fins each with a 5145mm squared surface area, whereas the NH-D14 features 84 fins with approximately the same surface area as the Phanteks. In practice, the Phanteks boasts the largest surface area for heat dissipation. To maintain structural rigidity, each stacked fin is interlocked with the adjacent ones at the side and in the middle. 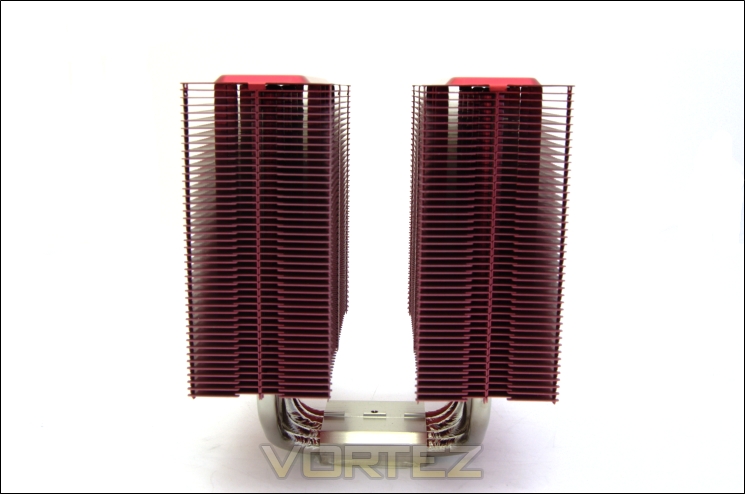 The side profile and dual radiators
From the side, we can see more clearly that each fin is laminar and the radiator columns are linearly aligned. The Phanteks doesnt have the same asymmetry as the Noctua NH-D14 in its heat pipe positioning so both radiators are equidistant from the centre of the base. This means that the PH-TC140PE may protrude further above the memory slots. There is a 33mm gap between the radiators to accommodate a 25mm thick fan with enough extra space to manoeuvre it in. The gap is a mere 28mm for the NH-D14 although the Silver Arrow has a 42mm gap to house 38mm thick fans. 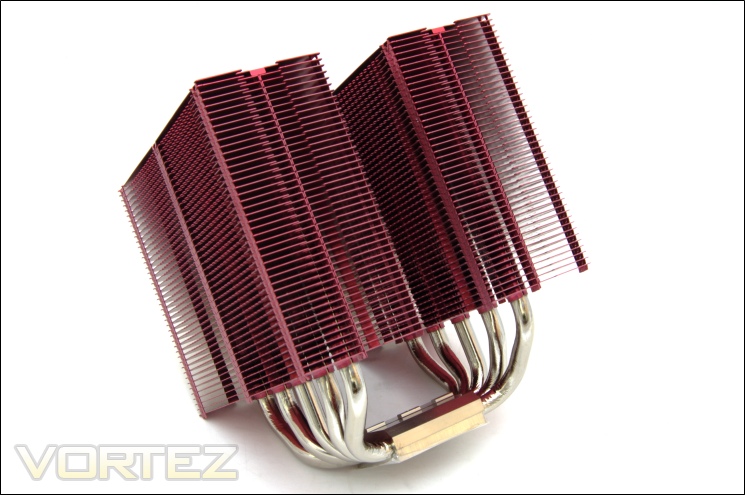 At an angle...
The Phanteks PH-TC14PE features Physical Antioxidant Thermal Shield patented technology which aims to increase the cooling performance while deflecting thermal radiation for other nearby sources. This is perhaps derived from aerospace technology but without being part of the development team, it is hard to determine how much of it is marketing spiel and how much is innovative technology. We will give Phanteks the benefit of the doubt here but as usual, the proof is in the performance. Ill say now that all those tiny attention to detail have made the Phanteks a truly exceptional cooler. The ends of the heat pipes have the tough job of supporting a radiator on each end. Thankfully, the robust construction ensures perfect stability. 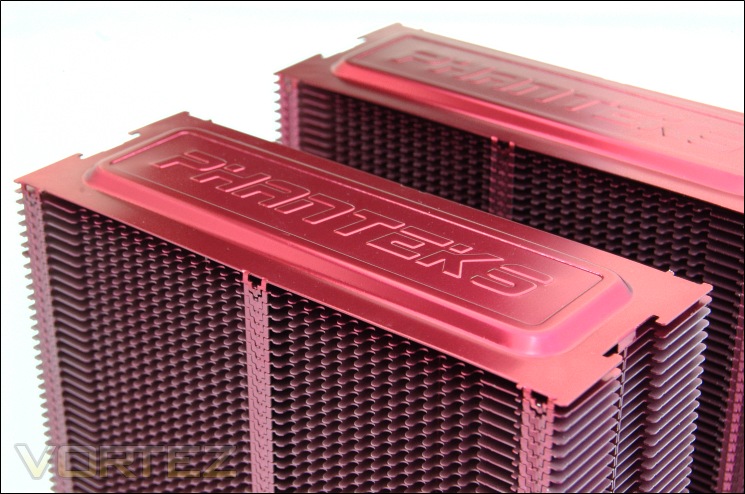 The aluminium top plate engraved with the Phanteks logo
At the top, the ends of the heat pipes have been covered by aluminium plates that act as extra cooling fins. Engraved onto them is the Phanteks logo highlighting the brands attention to details in their bid to improve performance and aesthetics. The plate is nicely polished to create a reflective surface, albeit not a mirror one like Thermalrights Silver Arrow. The advantage is that its not a thumb print magnet. 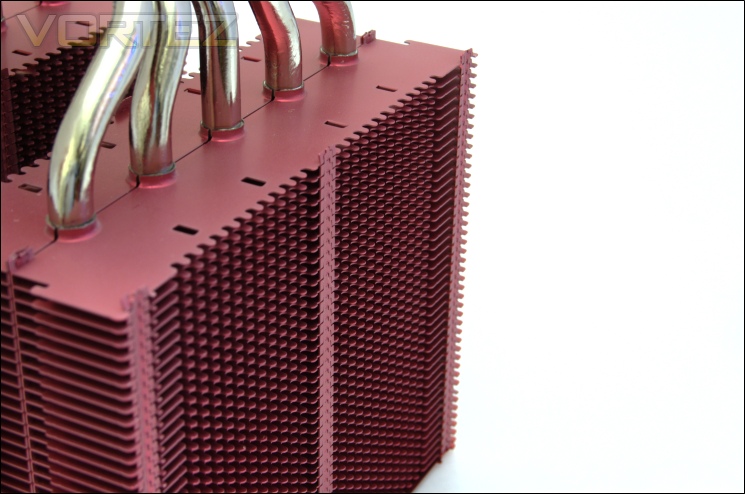 The fina arry
Lets take a closer look at the fin. Again we see very strong resemblances to the Noctua NH-D14 fins. The edges are serrated to generate more turbulence which when coupled with the focussed airflow of the PH-F140TS fans improve heat transfer. Those serrations are more rounded on the Phanteks than they are on the Noctua which may increase the desired effect of turbulence. Another observation when we look at the base of the fins is that they are made of two halves soldered/connected along the centre seam. 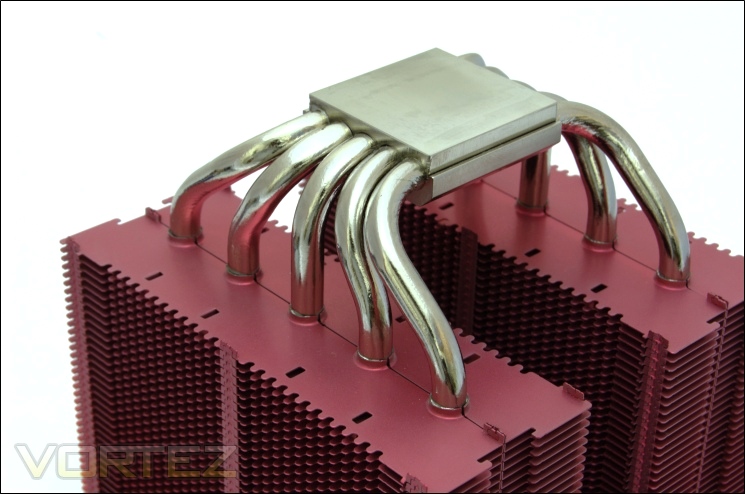 The five 8mm heat pipes
One of the most significant features of the PH-TC14PE is the implementation of five 8mm thick heat pipes. Traditionally high end coolers feature either 6x6mm heat pipes (Noctua NH-D14) or 4x8mm heat pipes (Thermalright Silver Arrow). In this case, Phanteks have adopted the Silver Arrows design and added an extra heat pipe for faster heat transfer. These copper heat pipes are soldered to the nickel plated copper base plate so that heat can spread more efficiently from the CPU. 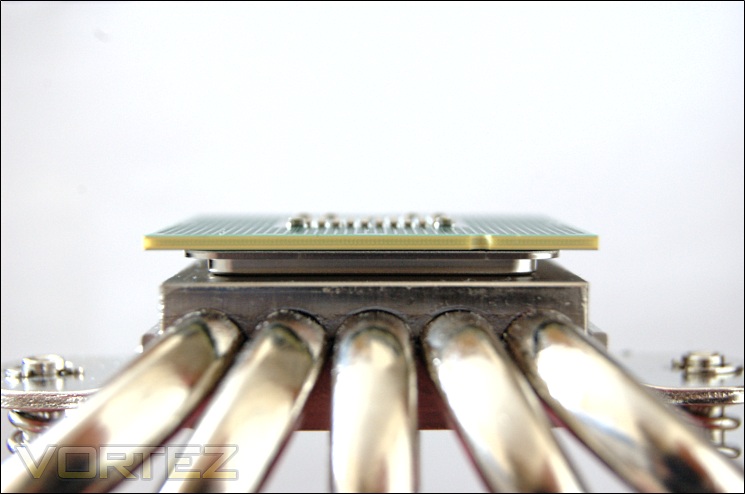 Contact with the CPU
One worry with numerous thick heat pipes is that they may not overlie the actual CPU and thus be wasted. To alleviate the problem, a copper block housing the heat pipes becomes more efficient as heat from the CPU can spread out regardless of its size. This is a far more efficient and flexible design than direct heat touch technology in such situations. Some may argue that the contact between the heat pipes and the base wont be perfect and may create gaps but this is why Phanteks employ C.P.C.S technology. Nonetheless, lets take a look at the size of the PH-TC14PEs base and the largest CPU on the market currently; the Westmere based Core i7 990X. The base of the heatsink is 44.5x42mm. The corresponding dimension of the CPU HIS is 32x34mm despite the CPU itself being 42x45mm. Although we observe that the two end heat pipes dont fully overly the CPU HIS, the base plate is more than big enough to make good contact and spread the heat. It is because of varying sized heatspreaders that some coolers tend to perform differently with different CPUs and the reason why we at Vortez test the most demanding chips to highlight the performance delta between coolers. 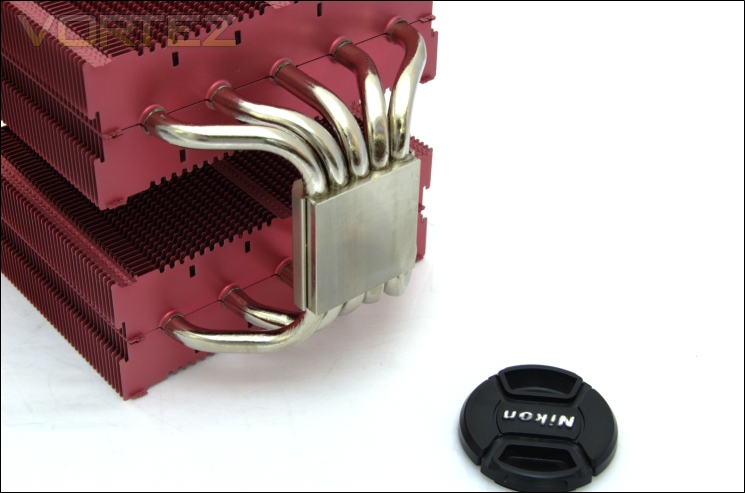 The heatsink base
The base of the heatsink is flat but lacks a mirror finish as demonstrated above. All five heat pipes are directly soldered to the base copper base plate.