👤by Richard Weatherstone  Comments 📅19-01-12
Performance Testing
Using the QPAD MK-85 was a pleasure throughout. I have used many mechanical keyboards recently and feel qualified to pass judgement on what is good and bad about each mechanical keyboard, especially when compared to their rubber domed counterparts.

General Use
I heaped praise on the QPAD MK-80 for its performance in the general use section and I can honestly say that while the MK-85 is a delight to use, the tactile feedback of the MK-80 just edges it for me in this department. That isn't of course to say the MK-85 is a bad performer as it certainly isn't, in-fact I would say it comes a very close second. I recently criticised the Corsair Vengeance K60 which uses the same Cherry MX Red switches but thanks to the wrist-rest provided by the MK-85, the Cherry red enabled keyboard on this occasion was a pleasure to use. The light keystrokes required are great, especially for touch typists and while the MX Black switches are also very good, they are a little too heavy for lengthy typing sessions. The Cherry MX Red keys strike a very good balance between the linear Cherry MX Black and the tactile but lighter MX blue. The MX Red's are neither tactile and they are lighter than the MX blue. Perhaps the ideal typing key would be the Cherry MX Browns however I feel they would not be the best switch to use for a gaming keyboard which this keyboard most certainly is as we will find out next. 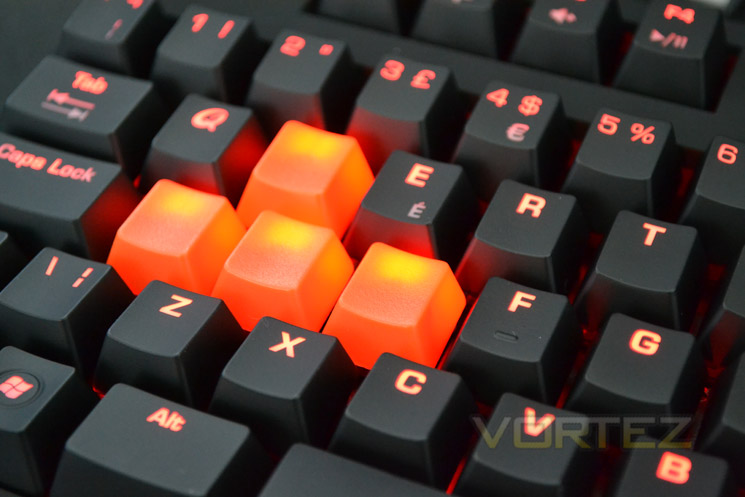 Gaming
A keyboard is just a keyboard when gaming right? Wrong! Next to a mouse, a keyboard is the most important weapon you could possibly choose and is therefore worthy of investment. While even your average gamer can make do with a bog standard run-of-the-mill keyboard, you will only ever be just that 'average'. I'm not saying for one minute that buying this keyboard will turn you into a pro, no peripheral will do that but it will certainly give you the best possible chances. The Devil is in the detail so they say and this is where the MK-85 stands above the crowd. The Cherry MX red keys are ideal for swift double taps and being mechanical keys they are certified to be good for over 50 million presses whereas the rubber domed keyboards will have work out long before then.

Adding macro capability makes this keyboard even more sought after, especially for those that will make use of this feature such as MMO/RTS gamers where macro settings come into their own. Even if you are an FPS gamer, setting up a few valuable macro settings can save you from time wasting and allow you to get on with other things. Imagine switching from your main gun to priming a grenade for 2 clicks, throwing then reloading your main gun with just one key press? The possibilities are endless, especially with up to 50 macro programmable keys over 5 profiles assigned to any key you wish!

Overall then, the performance of the QPAD MK-85 is nigh on perfect. While it just falls short of being a perfect typists companion, its gaming performance is unrivalled. Some may still prefer the stiffer Cherry MX Blacks of the SteelSeries 7G or indeed our previous favourite, the Tt-eSports GMEKA but I am officially now a convert to Cherry MX Red keys as they offer excellent general usage performance along with sublime gaming ability.