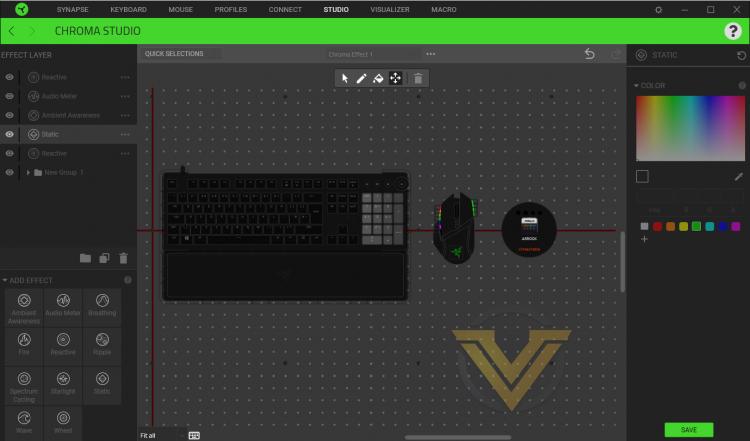 It will be no surprise to learn that RGB lighting on Razer peripherals almost entirely relies on the Chroma Studio configuration module, so your success in crafting the perfect effect for you will depend on how well you can gel with this utility. Chroma Studio is accessible through the Synapse app alongside the Visualiser discussed below.

The Basilisk Ultimate has fourteen discrete lighting zones grouped into four separate regions: a Left Strip below the left mouse button (8 zones), mouse wheel, Razer logo, and Right Strip below the right mouse button (4 zones). The nature of the diffusion panels through which the LEDs shine mean that adjacent lighting zones will tend to bleed into each other rather than appear as discrete blocks as indicated in the software.

Like many other approaches Razer Chroma constructs a full effects package by utilising layered effects and transparencies, allowing complex schemes to be built up using simple building-blocks. Less common is the distribution of community profiles to inspire other creators and get some tips on how to create a particularly perplexing effect. 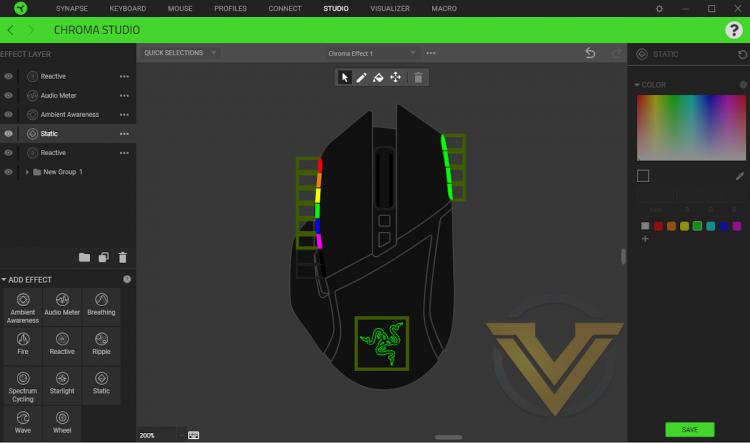 Weve hooked up two devices to Chroma Studio: the Basilisk Ultimate and the Huntsman V2, both of which are fully Chroma compatible. The Studio has also detected a third compatible device, our ASRock B450 motherboard which is currently disabled. All are displayed simultaneously in the studio software in a central section referred to as the Canvas rather than requiring independent configuration, at a stroke removing the guesswork that often goes into lighting profiles linked across multiple devices. Hardware can be positioned anywhere on the canvas, also helping with timing specific effects so they appear contiguous across regions in space. The preview is updated in real-time, and applied to the devices when you save it to the current profile.

Razer add an additional aspect to the layering system through groups that help to organise more complex effects across a wider range of devices. The value of this feature multiplies when you consider the enormous range of components that are now chroma compatible, up to and including wall and room lighting, and will also aid in integrating new devices into an established Chroma setup.

Chroma offers 12 different lighting effects that can be applied to a selection of lighting zones for each layer, each with individual configuration options.

Ambient Awareness:- Tracks the colour of a region on-screen and reflects it in the applied layer.
Audio Meter:- Pulsing lighting for the layer with colour and intensity that adapts to the current audio. Disabled when no sound is being played by the selected sound device.
Breathing
Fire:- Flickering fire effect oscillating between a hot and cold colour. Less intensity the higher you go up the canvas.
Reactive:- Flash a keyboard key when it is pressed, or with mouse buttons flash all zones of the mouse.
Ripple:- A ripple of colour (or spectrum of colour) pulses outward, centered on a key or mouse button pressed.
Spectrum Cycling:- cycle through a spectrum of colour. The spectrum can be edited to shift through preferred colour schemes.
Starlight:- Briefly illuminates a lighting zone in the selected area before decaying back to background.
Static:- A static colour scheme
Wave:- A wave of light pulses across the selected lighting zones, with spectra reflecting the peaks and troughs of the wave. The angle of this wave can be adjusted; 90 degrees - i.e. left-to-right - is the default.
Wheel:- A spiral of colour rotates around a centre-point (that you can define on the canvas). Spectra, direction and rotation speed can all be adjusted as desired. 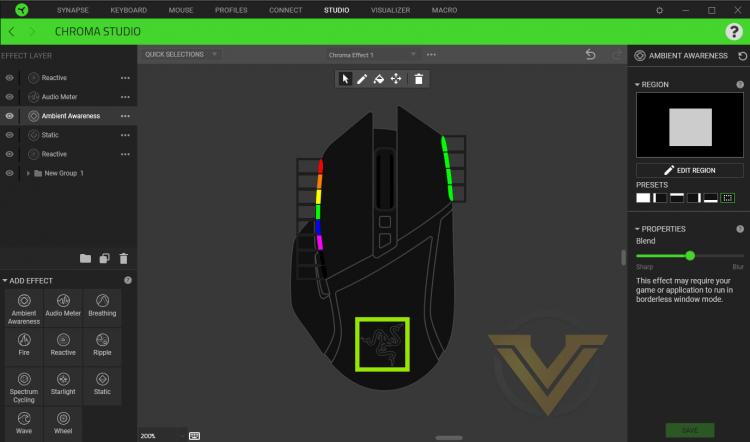 Separate to the Chroma Studio is the Chroma Visualizer. This standalone lighting scheme places an equaliser effect over connected Chroma devices that reacts to audio played through a specified audio device, and the Visualiser can be activated when only specific applications are launched (such as a favourite game or music player). 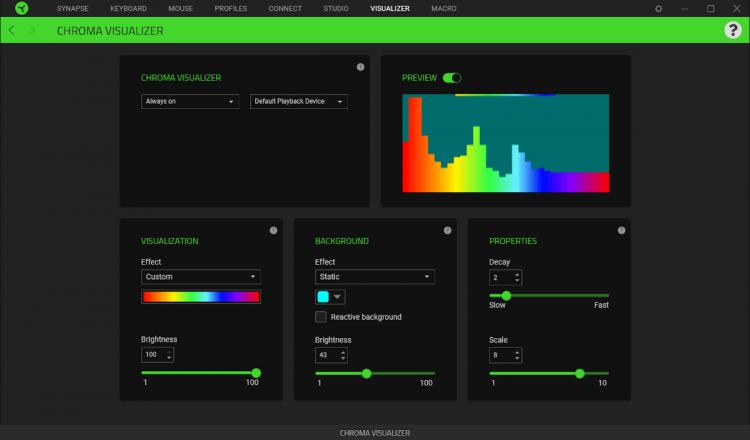 In the Visualizer settings youre able to configure the colours of both the equaliser bars and the background, using pre-baked colour spectrums and effects such as Wave and Spectrum Cycling. Properties such as decay (the rate at which the equaliser bars fall) and scale (the height of the bars for a given frequency amplitude) can also be altered.

Its a simple but effective lighting scheme that we can well imagine sees a lot of use in demo rooms and at LAN parties, where something fast needs to be set up that isnt the run-of-the-mill cycling wave effect. Otherwise, it seems a little out of place as a standalone feature of the software without also making it available as an additional layer effect. 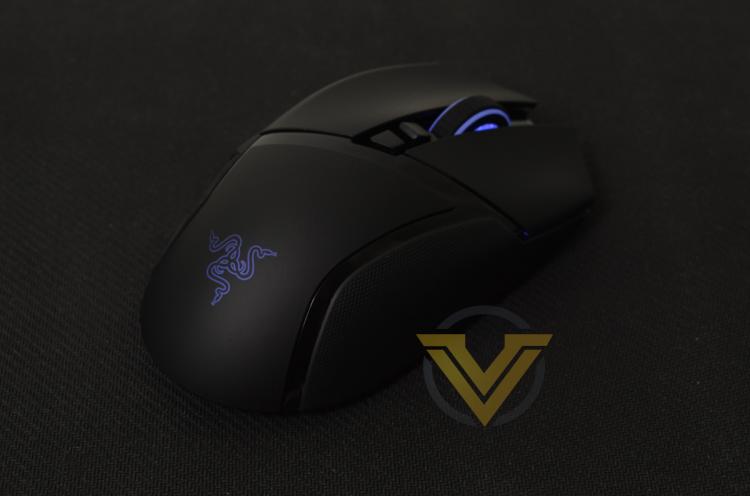 While other lighting systems may offer more baked-in effects and have slightly gentler learning curves, the Chroma system and especially its Chroma Studio workspace acts as a force-multiplier like no other, linking each supported device for a far more dynamic and immersive experience than would be available elsewhere. The Canvas approach in particular is excellent and should be adopted by other manufacturers seeking to give users the tools they need to create room-wide effects that arent limited to single or dual devices. 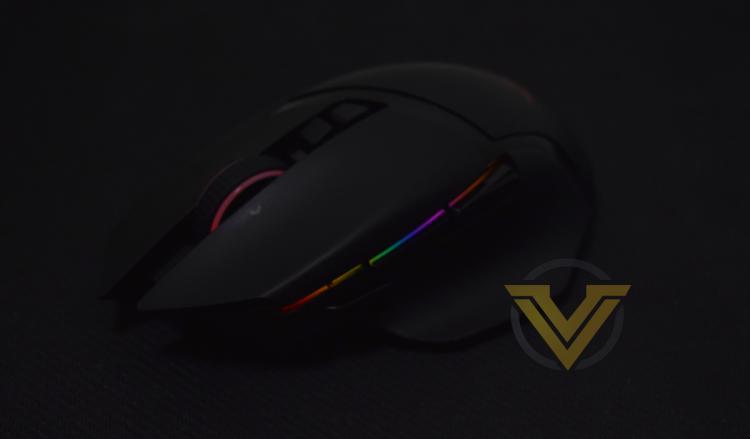 That being said, this plethora of options spoils the Basilisk Ultimate. Setting up a dynamic and unique lighting profile is straightforward enough, and the lighting hardware is certainly bright and vibrant in each zone, but being covered by your hand 90% of the time does its capabilities a disservice. Because of that, more niche use cases of the Chroma system, such as triggering some lighting effects based on certain mouse conditions such as DPI level or when specific buttons are pushed, would be welcome additions to the base install.

There are currently 586 user(s) online:
Google