It's always illuminating to see a manufacturer's range evolve from one generation to the next, and time often gives you that space needed to appreciate the changes. Razer recently recalibrated our baseline of what makes an excellent premium gaming mouse with the Basilisk Ultimate, so its appropriate that our next investigation is into the realms of allied peripherals. Enter the Huntsman V2 Analog, a 2021 model keyboard that evolves the core benefits of optical mechanical switches, layers on further advanced features, and plays its part as a leader in the new pantheon of the manufacturer's mightily impressive peripheral catalogue. 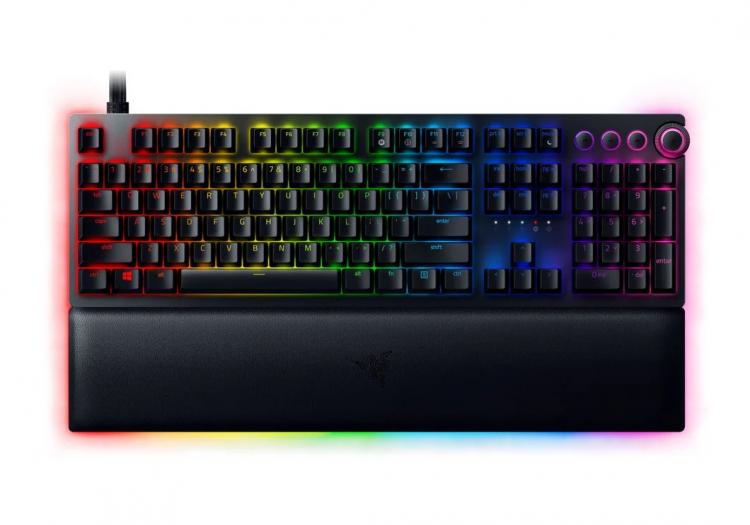 Optical mechanical switches have been a part of the keyboard landscape for a relatively short period but theyre starting to make their presence known in the upper echelons the market. Last year Corsair launched the K100 RGB, their flagship model with brand new OPX optical switches; other manufacturers have been dabbling with similar implementations for a few years, with mixed results.

The switch design might be relatively costly to produce compared to mechanical competitors that are churned out by the million every day but the advantages are significant. Longevity, particularly under heavy usage conditions, benefits from a lack of metal-on-metal actuation, and debounce dynamics are greatly simplified by the use of calibrated optical sensors. By driving up durability beyond 50 million keypresses while maintaining long-term reliability, the optical mechanical switch becomes an excellent tool for gaming. That being said, Razer goes still further with the Huntsman V2 Analog.

This Huntsman might not be the first keyboard to leverage an analog switch - Steelseries Apex Pro has an analog switch type that relies on Hall effect rather than optical sensors - but it might be the most accomplished. Through complex interactions of software and hardware you can set your own actuation points (in a range of fast 1.5mm to slow 3.6mm), have multiple actuation points for multiple bindable functions, or even emulate an analog controller with continuous pressure feedback. For reference, Corsairs K100 has conventional actuation and no analog control.

All this added capability will mean that the Huntsman V2 Analog will also be a stern test of your dexterity if you want to use it to its fullest. No more mashing the keys, just controlled pressure for a precise response; pretty much the opposite of how keyboards tend to be treated.

Rounding off the package are the other aspects that have become core to premium keyboards: remappable media keys, USB pass-through, per-key and underglow RGB lighting, and a plush wrist-rest. Plus, in the Huntsman V2s case even that detachable wrist-rest has customisable edge lighting.

This SKU sits firmly at the upper band of the premium consumer segment with an MSRP of $250/£250. To put that into perspective the K100 RGB is priced at a more modest $229/£229, the Apex Pro is $199, and their own Huntsman Elite (a similar SKU with non-analog optical switches) comes in at $199. However, the added functionality of the Huntsman V2 Analog makes you question whether direct comparisons can even be made.