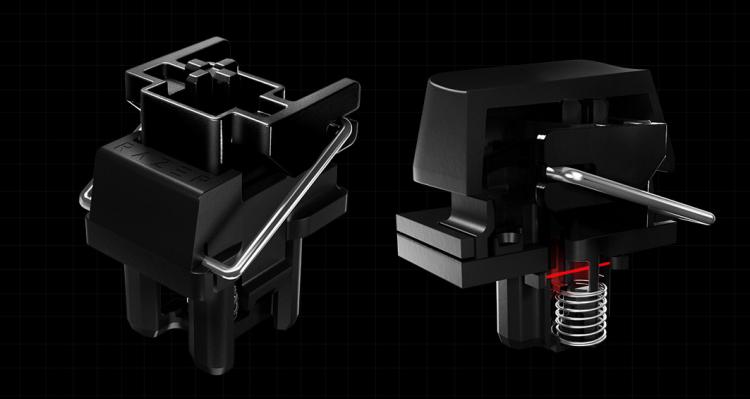 The Huntsman v2 Analogs killer innovation is the Razer Analog Optical Switch, a linear design that not only allows for pressure-measuring actuation but also a touch of RGB customisation at the same time. Its no simple redesign of common mechanical mechanisms, but rather a whole different beast altogether. Coupled with PBT doubleshot keycaps, they represent the most premium aspect of the peripheral through high-end customisation not seen elsewhere in this combination.

Razer Analog Optical Switches have a required force of 54g for the minimum actuation distance (1.5mm) up to 74g for the full movement range (3.6mm), making them a little heavier than Cherrys MX Red. The minimum travel distance is also a little longer than the MX Speeds 1.2mm. Theyre a relatively close analogue to MX Black switches in overall feel, i.e. a stiff linear experience.

Integrated stabilisers are an interesting inclusion but likely necessitated by the shape of the stem. They add a little rattle to the switch (which you can clearly hear if you lift and shake the keyboard) but nothing outrageous.

The distance by which the switch has been pressed is measured through a light sensor that tracks the amount of light hitting it rather than a simple binary detected/not detected. Once calibrated in-house the light sensor reading correlates directly to a stroke distance travelled.

With distance reporting available its possible to adjust the actuation distance, from a fast 1.5mm to a more leisurely 3.6mm on a per-key basis (the norm for an MX Red linear switch is ~2mm). This allows the sensitivity of a particular keystroke to be adjusted for whats appropriate for a particular function, for example you might want very sensitive movement keys but relatively heavy skill keys to prevent you from fat-fingering them. When typing, actuation closer to the mid-point might be more appropriate to reduce both errors and typing fatigue.

Why have just one actuation point when you can have two? These analog optical switches can be set up to register one key at an initial actuation point, and then another at a second point further down the stroke. Razer offer the example of (in an FPS title) switching to a grenade at the initial point and then throwing the grenade when bottomed out, but it could also be used for multiple potions in an ARPG like Path of Exile or different but related skills in MOBAs or slower paced MMOs. Its value as a flexible and customisable feature is determined by the dexterity of your fingers and the game in question.

Dual Actuation requires Synapse software, but can be stored on a per-profile basis.

Did you ever play old flight sims like Star Wars: Tie Fighter on your keyboard and rue not owning a joystick, or a driving sim without a wheel? Okay so you may not be knocking on 40, or and have a plethora of game controllers to hand, but that doesnt mean that this analog switch isnt a marvel.

With its fully configurable array of analog switches the Huntsman v2 Analog can be set up to respond like an analog input similar to a joystick, with a stronger input registered the further you press down the switch. By judicious configuration of the keys you can simulate a 360-degree range of movement, or configure sensitive steering controls through your keyboard alone.

Specialised HOTAS and wheel systems will certainly be more effective for pure flying and driving sims, but this system comes into its own when a title switches from one viewpoint and control mode to the other. A fine example is open-world juggernaut Grand Theft Auto V, where third-person antics are joined by vehicular gameplay and it would be great to enable smooth transitioning between the two with just one set of input devices. Keyboard profiles can be used to quickly switch between keyboard and simulated analog joystick/gamepad configurations.

Indeed, analog actuation currently operates effectively only when a game supports simultaneous keyboard and game controller inputs, putting a slight damper on the features allure. The list of supported games is sure to grow however as PC games become ever more complex and multi-disciplinary.

As with Dual Actuation, Analog Actuation also requires that the Synapse software be installed.

Keyboards produced by Razers competitors typically offer only USB 2.0 passthrough at best from their keyboards, even as part of their premium designs. The Huntsman V2 Analog in contrast offers full USB 3.0 speeds to a port on the keyboards left side which is ideal for quick removable storage. 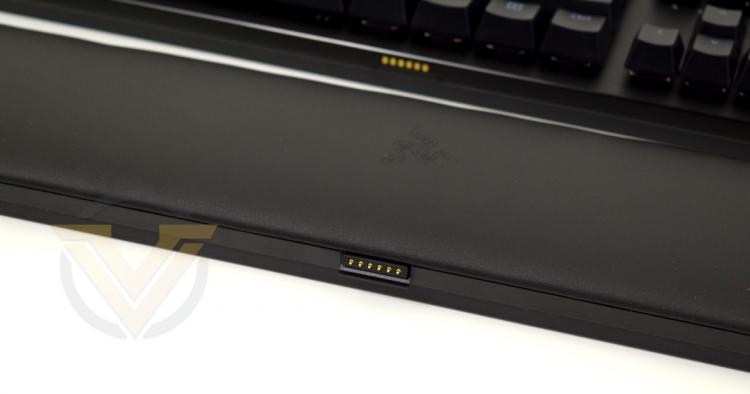 The Razer Huntsman also arrives with a detachable wrist-rest, but its not held in place by simple clips. Instead two magnets marry the upper edge with the bottom edge of the keyboard, holding it securely in place with the help of large rubber feet on its base. Six electrical contacts allow illumination and control of underglow edge lighting around the wrist-rest that is identical to that around the keyboard itself, meaning that any lighting effect isnt interrupted or undermined by the addition of the wrist-rest.