👤by Tony Le Bourne  Comments 📅08-06-15
Performance Testing
Setup, Design & Observations
Other than the driver installation process, setting up a USB headset tends to be fairly straight forward. The cable length is 2m, which is enough for most and as previously touched upon, its a shame it isn't modular. The contruction is good quality plastics, very robust and oozes quality. Upon wearing the headset, my fear of the earcups not being large enough real, resulting in a not quite circum-aural (over ear) not quite supra-aural (on ear) experience. The clamp strength and the super plush cushioning is comfortable and feels great, but that only delayed the inevitable fatigue brought about by the somewhat questionable earcup size induced ear crush, though this was over a long period of several hours and up until then, they do remain reasonably comfortable.

To touch on the lighting again, the effect created is actually impressive, I love those tiny colourful serpents.

Multimedia
It only took a fraction of playing music to realise that this is first, and foremost a gaming headset in its archaic sense. Thick heavy mushy bass like treacle gurgling out of a whales blow hole. This headset is very bass heavy and considering that the max volume is very loud, the booming WOMMM is the kind that makes your nose run on a sunny day. Not for listening to music. I attempted to balance the audio a little using the equaliser but honestly, it couldn't be done, below is the closest I could get to 'acceptable'. The result was pleasing but the mids and highs were 'tonally' different to what I am used to, with the mids and highs tending to be fairly loose. 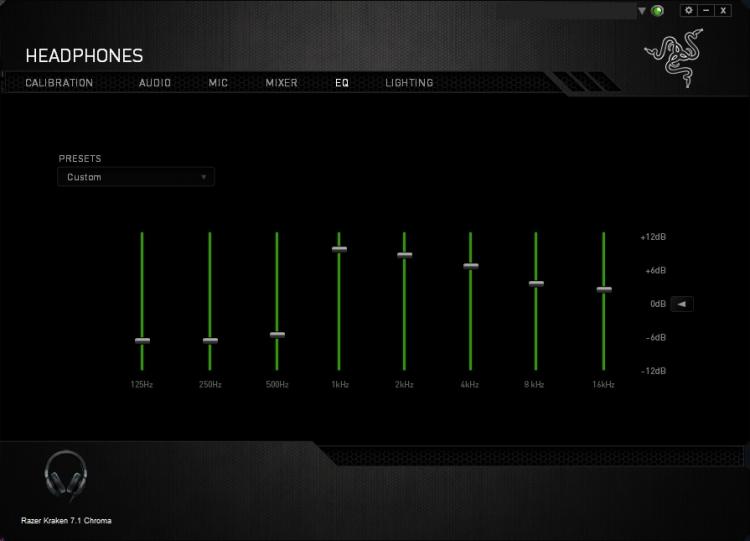 In games, the booming audio helps bring shooters alive and the 7.1 surround is pretty decent too. Though finer details were often lost in the muddy tonal range. If you love feeling explosions and excitement, these do the trick, though if you want to hear footsteps, movement and other subtle effects, they will mostly be drowned out in any action going on at the time. In DOTA2, the Kraken 7.1 didn't bring out the glory of the game, with muffled sounds and the virtual 7.1 straining to really give any real clarity to the audio.

Microphone
The microphone is strange, in that it is actually very natural and warm sounding and does a great job of blocking background noises, though there tended to be a pickup lag which resulted in fast said words not being transmitted at all. I played around with the various microphone settings, and there didn't seem to be an option to fix this. It 'mostly' wasn't an issue particularly with sustained words and conversations, but if you are one to say short sharp words like 'yo', yeh', 'nah' and 'ok', you will want to expand your vocabulary to include 'affirmative', 'negatory' and 'copy that' instead, otherwise you may find that noone actually recieved your response.