👤by Weston Dakin  Comments 📅30-08-18
Components
So in traditional fashion, well be parting out an AMD based and Intel-based system, some parts will be shared between the two as they are interchangeable between the platforms. 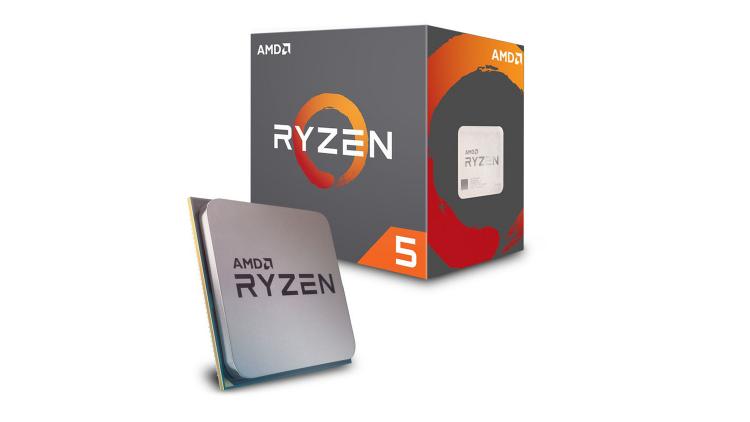 Luckily AMD hasnt found a way to add RGB to a CPU - yet, but it is a core component that youll need is at allows your system to crunch data. The 2600 weve selected is a 6 core CPU with 12 threads and has a base clock speed of 3.4GHz and a max boost of 3.9GHz, other notable specifications include 16mb of L3 cache a TDP of 65W. The 2600 can be overclocked if so wish, but youll need a beefier cooler to keep the extra temp in check and to help with stability. If you want faster core speeds out of the box there is always the 2600X, however, that will incur a premium over the 2600. In terms of performance the 2600 beats out the old 1600 and 1600X by a small margin, so if you wanted you could go that route and save a bit of cash. 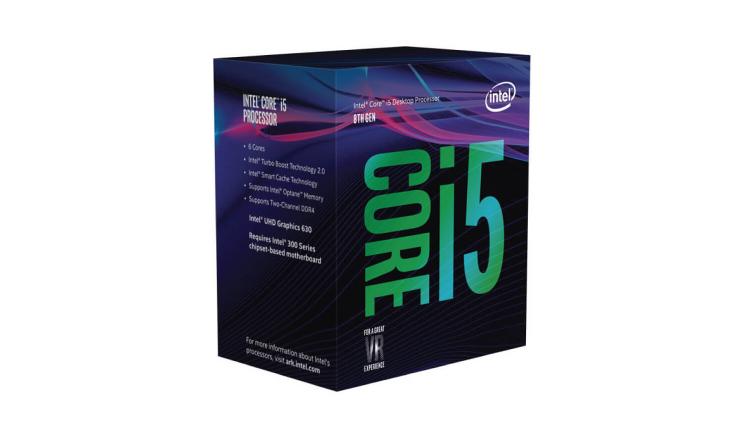 Our Intel CPU choice was made to try and keep in-line with the AMD build, and that narrowed our choice to one CPU - the i5 8600. This is a 6 core that has 6 threads, the base frequency is 3.1GHz, and it turbos to 4.3GHz. Unlike the Ryzen 2600 this CPU is locked and cant be overclocked, but benchmarks show that it is on par and in some cases superior to the 2600 when it comes to gaming. If you do plan on overclocking, then youll need to opt for the K variant of the skew as that is unlocked. Again like with AMD there is an extra cost to that variant.

But whichever route you go down, both of these CPUs will be great for gaming and for most productivity tasks. Of course, the choice you make will dictate which motherboard youll need, but luckily weve picked two in this guide. First though, well select a CPU cooler. 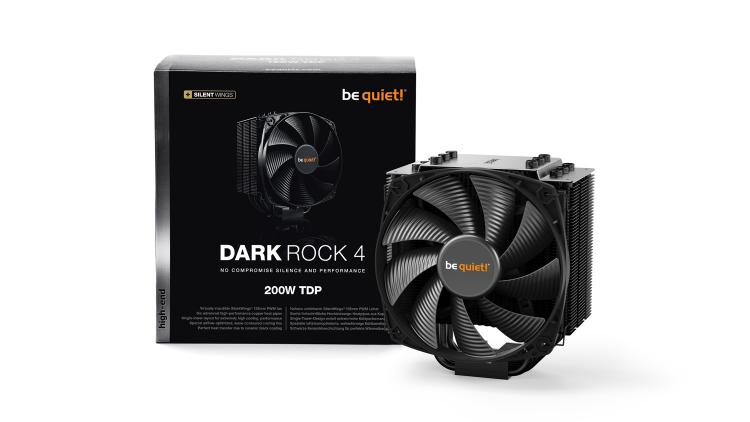 We opted for the be quiet! Dark Rock 4 as it is a very attractive cooler that fits the aesthetic that this build is going for. The all-black design is clean and minimal, and there is no trace of RGB. Looks werent the only contributing fact as this cooler works for both CPUs and performs very well. It makes use of a silent wings PWM fan which is 135mm and manages to achieve ultra low noise outputs. Plus it has a TDP of 200W which is plenty for either of the CPUs whether they are overclocked or not.

We reviewed the Dark Rock 4 back in April. 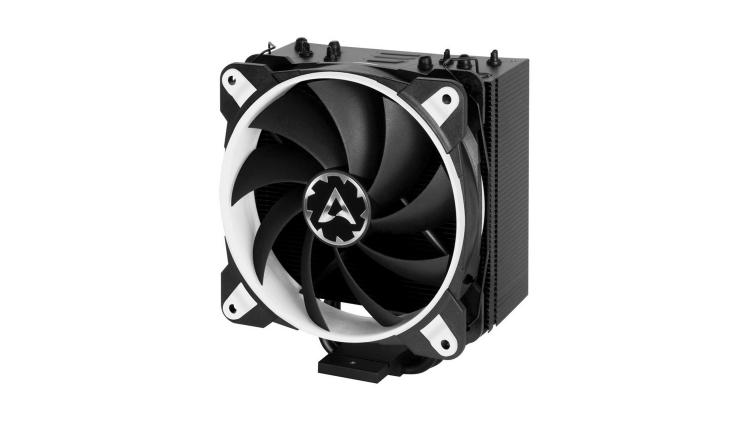 If the be quiet! cooler is a bit of a stretch then the Arctic Freezer would be a great cheaper option, it works for both CPU's, plus it's available in white and black which matches the clean aesthetic that the build is going for. It has a TDP of 200W, so it has so cooling is not an issue, even if you plan on overclocking your CPU. It uses a 120mm PWM fan that has a range of between 200 to 1800RPM which is a great and means that it should stay pretty quiet during low load situations. 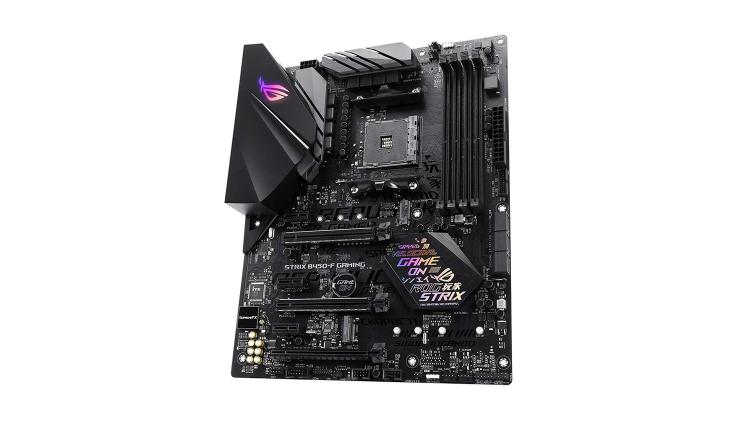 The choice for B450 is slowly growing, but the ASUS B450-F was one that stood out among the earlier offerings. The aesthetic - minus the RGB is exactly what we were looking for as its mainly black with a few dark grey accents. As mentioned in the intro RGB is very hard to escape, and this is an RGB capable motherboard, but as it utilises Aura Sync lighting this can be changed to one solid colour, or simply turned off. Now that the RGB has been addressed we move onto the feature set, and its surprisingly broad for a mobo at this price point. It features support for dual M.2 SSDs, USB 3.1 Gen 2, RAM speeds of up to 3200MHz with a max capacity of 64GB as well as dual OP amplifiers for the audio and so much more. 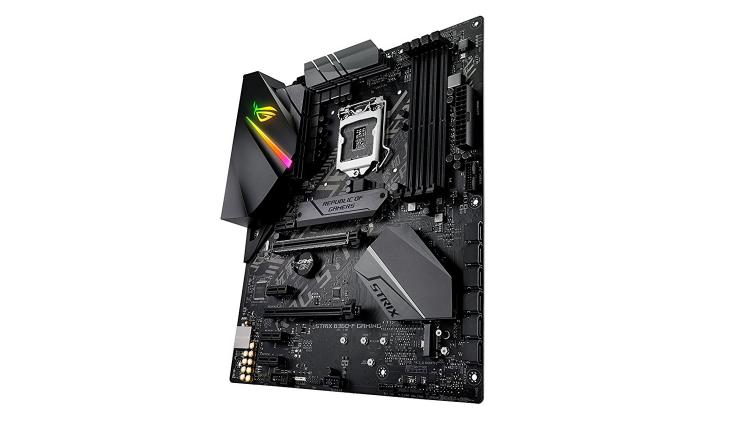 Like the AMD counterpart, the B360-F GAMING was selected due to the same strong feature set as the B450 and the similar clean aesthetic. It matches the AMD variant pretty much spec for spec with just a few differences. One notable difference is the max speed of the RAM, with the AMD board that is 3200MHz but with the Intel offering that is reduced to 2666MHz, this is due to Intel not relying so heavily on RAM speed to perform well whereas Ryzen CPUs still need the extra speed to get the most from them. However, the main feature set like dual M.2 support, dual onboard amps, pre-mounted IO shield, USB 3.1 support and max RAM capacity remain. One other noteworthy point is that if you do decide to opt for the 8600K or another unlocked variant of Intel CPU, then youll require a Z370 motherboard. 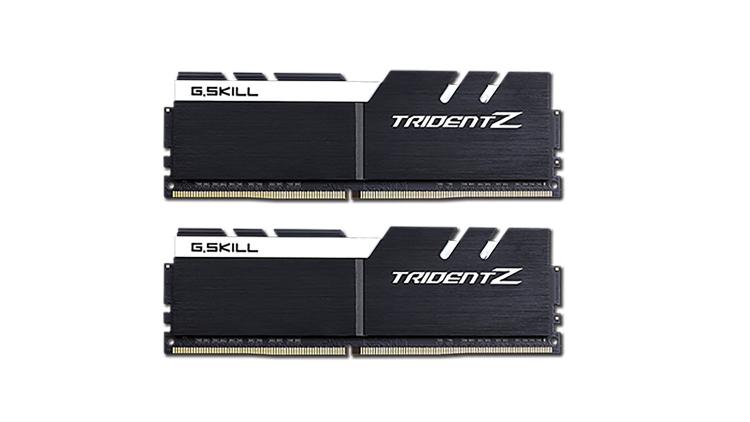 Like with the rest of the components the design was taken into account, and the Trident Z is arguably still one of the best looking kits available. It can be purchased with RGB or without it, and for the sake of this build weve opted for the kit without it, as not only is it cheaper, it also matches the RGB free theme we are trying to achieve. Of course, you could opt for the RGB variant use software to change the colour if you have your own theme in mind. This will incur a slight premium though. Also notable is that this kit has timings of 17-18-18-38, but if you want tighter timings there is a kit of the same RAM that offers timings of 16-16-16-36, again this is slightly more pricey but if you want to eek every bit of performance from the build, that could be a way to do it. Also if you opt for a Ryzen CPU, the extra speed will help get the most performance from it. 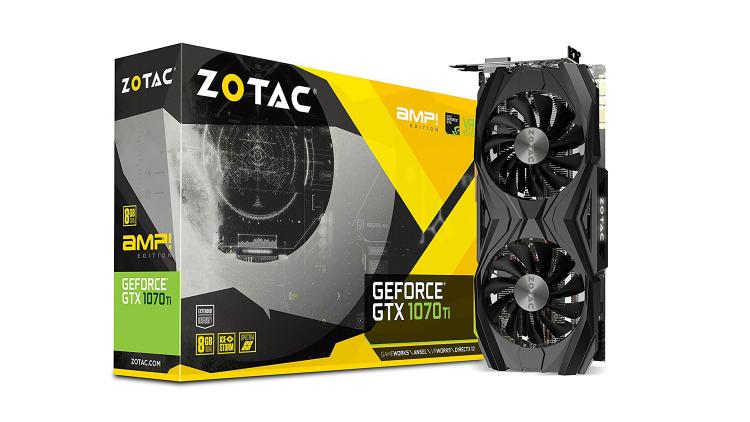 GPU choices these days are becoming easier as their prices drop back to the norm after the mining boom and the GTX 1070Ti is a great choice to go for. Its cheaper than the GTX 1080 but yet almost matches it in terms of performance which makes it great for high refresh rate 1080p gaming or even gaming solidly at 1440p. The Zotac AMP Edition is one such 1070Ti that blends in with the clean theme were going for, and it doesnt go overboard with the fancy lighting. It features 8GB GDDR5, has 2432 CUDA cores, a 256-bit memory bus, an engine base clock of 1607MHz and a boost of up to 1683MHz. It also features Zotacs IceStorm cooling technology that utilises two fans as well as direct copper contact cooling that helps draw heat away from the core. if you want to see roughly how this performs you can check our review of the 1070Ti AMP Extreme from Zotac. This card is slightly different but it will provide you with a baseline to the performance you can get. 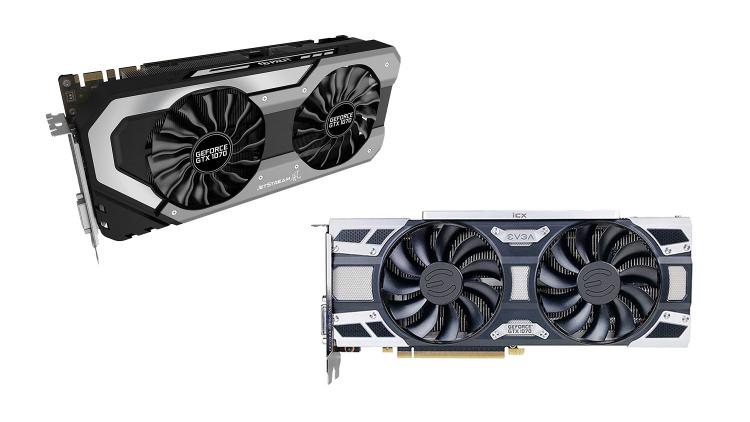 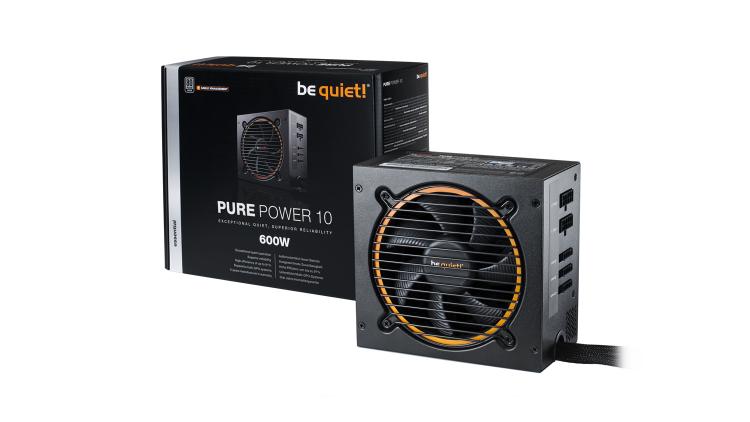 As well know we need a PSU to power a system and again there a lot of choices out there, one that stood out was the Pure Power 10 from be quiet!. Aesthetics didnt play as big of a role as the case we are opting for uses a PSU shroud, but reliability and performance do. The Pure Power 10 is Silver rated and has an efficiency of up to 91%, plus it uses a be quiet! fan which is known for their cooling performance as well as their quiet operation. 600W is also plenty of power whether you opt for either the 1070Ti or 1070, plus it provides a bit of breathing room if you plan on adding any upgrades to the system. 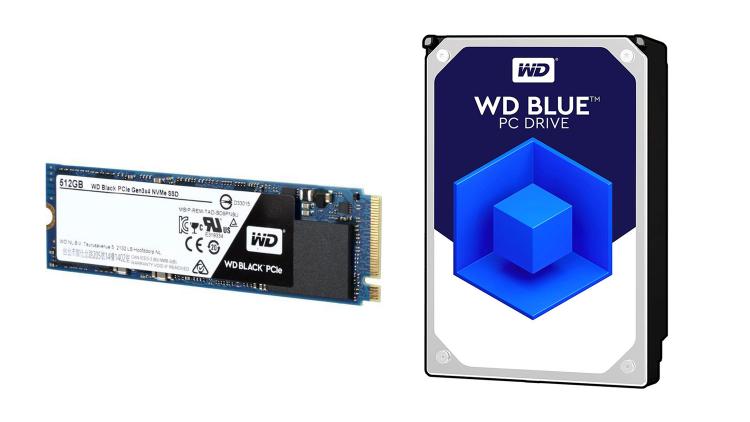 With storage there are quite a few routes you can go, you can opt for all mechanical - which we wouldnt advise, or you could go for an SSD, HDD combo which is still very popular and one that we have chosen to opt for. The bundle we have selected is a 500GB M.2 paired with a 2TB HDD, this duo will provide you with plenty of storage for all your needs plus be fast enough for gaming. The M.2 would make an ideal boot drive that would store your OS of choice as well as all your programs, the HDD is mass storage and can be used for games, media and more. HDDs may not be as fast as SSDs or M.2s, but their price to storage ratio cant be beaten. Yes HDDs have much slower loading times, but if you look at the price of a 2TB SSD, you may just sob. Of course, you could opt for a smaller capacity SSD - if your game library isnt huge, but there is still a premium to pay. Back to the combo weve selected, and the M.2 isnt the fastest on the market with read speeds of 2050MB/s and writes of 800MB/s but it is one the cheapest. 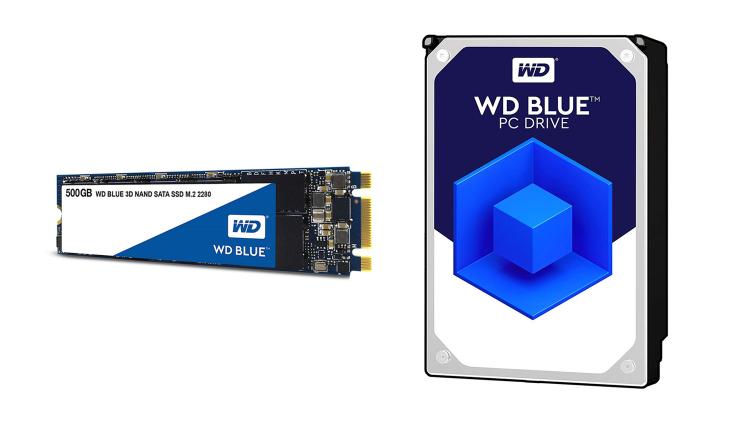 Like with the main choice weve again opted for an M.2 and HDD team, only this time the M.2 is significantly slower and there maybe 1TB of storage missing. 1TB is still plenty for a good size library of games and also media as well. The M.2 has speeds more in line with a SATA based variant with read speeds of 545MB/s and a write of 525MB/s but has the benefit of not needing any wires for a cleaner install. So if you can live with the slower speeds, it may be worth saving a bit of cash and investing it elsewhere in the system or for something else entirely. 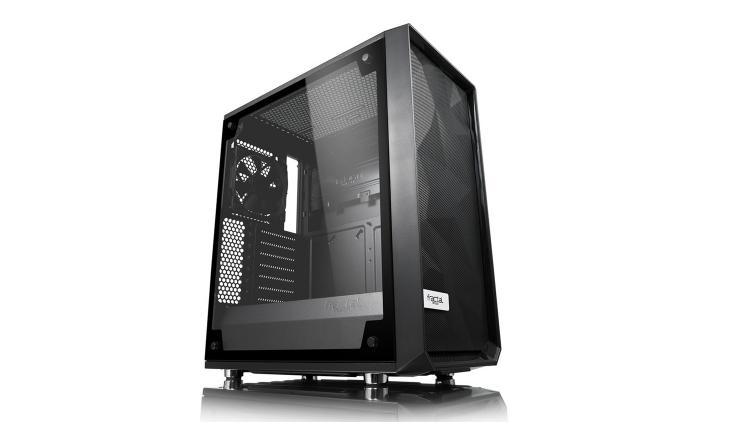 The Meshify C has often been regarded as one of the best cases you can pick up for less than £100; it offers brilliant air-flow, a clean interior, great compatibility for hardware and a nice design. The front has support for 3 x 120 fans or 2 x 140 fans or a rad of up to 360mm. The top has similarly broad support and can fit 2 x 120 or 2 x 140 fans or a 240mm rad - as long as the components in the motherboard have a height less than 40mm. It can fit a full-sized GPU with a length up to 315mm - if you opt for fans at the front and not a rad. It has a max CPU cooler height clearance of 172mm and can fit a PSU with a max length of 175mm. Plus it has anywhere between 15-35mm space for cable routing and also makes use of cable routing grommets as well as velcro tie-down points for cable management. 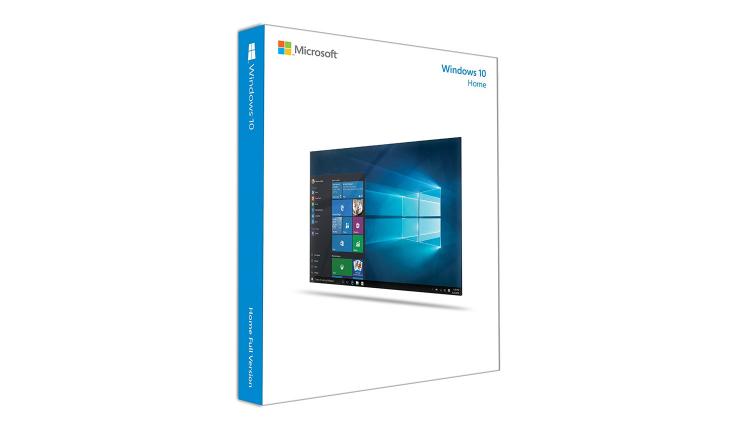 An OS is very important as it allows you to carry out all tasks youd ever need as well as providing a platform for you to enjoy your games. Windows 10 64-bit is a great option that will be needed if you plan on making a system. Of course, you could opt for Linux or a similar alternative, but Windows is arguably more full-featured, and although not perfect it is the main OS of choice for the average gamer.

There are currently 935 user(s) online:
Google