The Roccat Savu is unlike any other mouse on the market at present as it is the only mouse in the world that has a 4000DPI sensor. This sensitivity is of course already available in laser format at resolutions surpassing this but some laser mice suffer from tracking problems on cloth surfaces whereas optical mice tend to have a greater compatibility, suffering only minor issues on shiny surfaces. Despite this, laser mice have proven more popular because of the advances in technology meaning optical mice were always inferior in terms of DPI.

Roccat are of course no strangers to either format being connoisseurs of the mouse market. The Kone and Kova mice haven extremely popular with gamers worldwide and Roccat hope to replicate this success with the Savu. 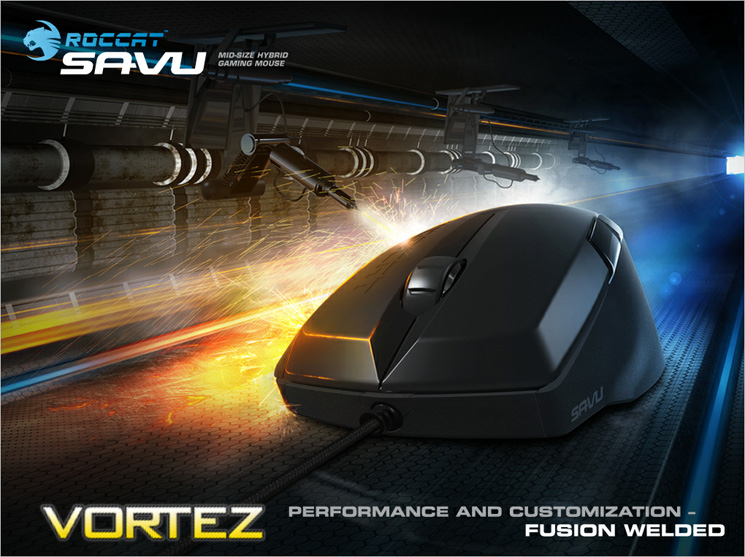 High optical DPI is not the only trick the Savu has up its proverbial sleeve though, it also has a the full functionality of Easy Shift[+] and a fully customisable light-bar allowing you to set the mouse to any one of 16.9 million colours. It also happens to use the highest quality materials throughout the design so aesthetically at least, the Savu seem to have it all wrapped up. Some might however say the beauty is only skin deep so we will be giving the Savu a thorough evaluation.

Here's what Roccat had to say about their latest product:
Combining astounding performance and massively-customizable features  packed into an ultra-rugged, perfectly-balanced, medium-size design  the tough ROCCAT Savu Mid-Size Hybrid Gaming Mouse easily dominates every device in its class, helping you to easily dominate every opponent you face.

The Savu features the worlds only 4000 dpi optical sensor  for precision optical gaming second to none. Its also the worlds first mouse to feature a stats and trophy system  called the ROCCAT Achievements Display, or R.A.D.  something previously known in similar form only in online gaming. Plus, our ROCCAT Scientists built the Savu using only the highest-quality materials, which means it will perform flawlessly and with the highest precision for the longest time possible