👤by Matthew Hodgson  Comments 📅21-11-18
Conclusion
ROCCAT have brought to market a capable, good looking keyboard with a proper price tag to go with it, though the question is, does it beat the competition?

Firstly, the ROCCAT Titan keyswitch feels great for typing and gaming, helped along by the keyboards thin profile and low stature, we found the overall experience to be comfortable and enjoyable, which certainly bodes well for a worthwhile purchase.

Add in the RGB lighting that permeates throughout the clear housing with tiny keycaps, this increases the keyboards appeal, with its unique approach of suspending the keyswitches above the backplate for maximum shine. The built-in effects in the ROCCAT Swarm software are beautiful too.

We cant be all praise on a keyboard that does prevent some flaws, such as the rather clunky layout of the media keys in the top-right, they could be better laid out and stylised a little, instead of using a cheap feeling rubber dome. Wed also like to see the volume wheel have some kind of button built-in as a mute toggle. The Vulcan also lacks a USB passthrough, and while we complain that keyboards still tend to only use USB 2.0, its much better than nothing. Swarm, ROCCATs all-in-one software suite, is well featured, but we did find it to be a little bit laggy and juddery with a great range of features that were never likely to use. It serves its purpose and does have the AIMO RGB lighting feature as a massive saving grace.

Overall, weve found the ROCCAT Vulcan 120 AIMO to be a very competent keyboard, rivalling the likes of Corsair and Razer for features, build quality and appearance, but thanks to the shallow keycaps and above-board keyswitch placement, the unique appearance of the Vulcan really shines through. Plus, theres always the added bonus of ROCCAT producing the 80 and 100 models, giving you the option of dropping a large portion of the cost if you dont want RGB lighting. 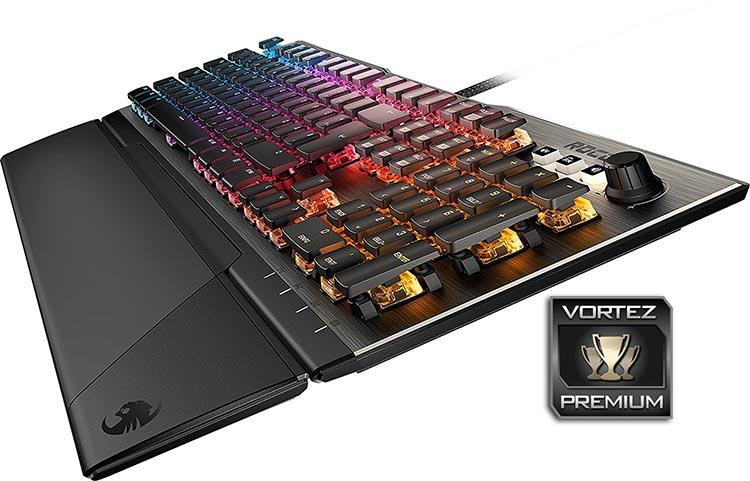 ROCCATs first attempt at a mechanical keyswitch has proved largely successful, which paired with the exclusive styling, makes this a very tempting purchase.