👤by Matthew Hodgson  Comments 📅21-01-20
Conclusion
Having fast access to your data is one thing, but keeping it secure at the same time is another challenge altogether. Add in the requirement of the device being small and sleek and easy to use and the equation just continues to get more complex. However, against all of that, SAMSUNG have pulled off quite the feat with the T7 Touch.

Weve been using the SAMSUNG T5 500GB at least once a week since we reviewed it in 2017 and its yet to miss a beat. Its excellent for transferring a Steam library, TV shows, anything you fancy, but the lack of security was always somewhat of a concern, until now.

The T7 Touch is thinner and sleeker than its predecessor, and in the Classic Black finish it looks fantastic, though it is slightly heavier at 58g versus 51g (not that you can tell the difference.) It also looks better than any other drive in this category, in our opinion. The shape and style is timeless with a beautifully well integrated fingerprint scanner.

In terms of using the software, setup was a piece of cake, we really couldnt have asked for an easier experience. Unlocking the device on other systems, including a Samsung Galaxy S9, a PS4, a Samsung QE65Q9FN TV and a laptop was all as simple as plugging the device in and placing your finger on the sensor; a few seconds pass and the host system detects the files and away it goes. It felt totally seamless compared to entering a password, which sometimes isnt even an option with some devices, leaving you locked out entirely.

Now, for the speed of the device. The T5 was no slouch when it was released but SAMSUNG have turned things up to 11 on the T7 Touch, utilising NVMe technology inside and almost fully saturating the USB 3.2 Gen. 2 interface for, in our tests, just shy of 1000MB/s. This drive beat out the SanDisk Extreme Pro in 80% of tests which is no small feat.

When compared to other drives of a similar speed, the SAMSUNG offers decent value, with a fingerprint scanner thrown into the mix alongside a sturdy unibody aluminium design and a three year warranty, its difficult to find a single flaw with the T7 Touch.

The only downside we could find was the wasteful packaging  if SAMSUNG can do something about that, were onto a winner! 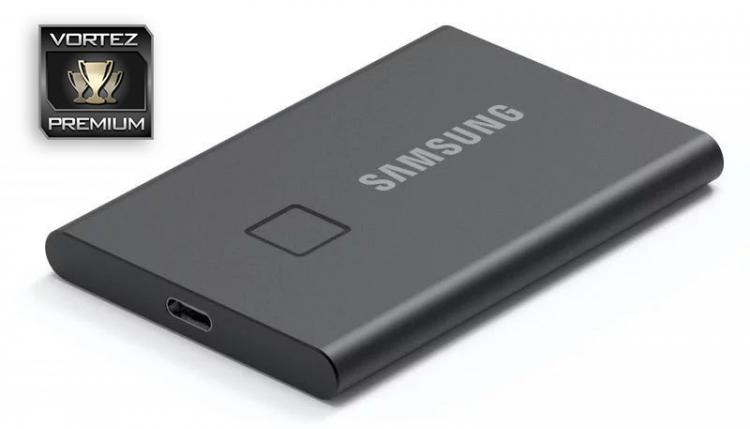 If you need stupidly fast data access and robust security, the T7 Touch will take some beating!

Pros
+ Incredibly fast
+ Simple, solid security
+ Beautiful design
+ Intuitive, easy to use software
+ Nothings quite as simple as a fingerprint