👤by Weston Dakin  Comments 📅25-10-18
Conclusion
The Sennheiser GSP 550 is a great headset, but we cant help think that with just a few tweaks, it would have made the GSP 550 that much greater. The issues are just little things like the dongle placement, colour choice - which we like, the limited software and platform support. Though not major flaws, they do hold the headset back from its true potential and somewhat limit its broader appeal.

Starting with the dongle, it's simply too far down the cable to be used comfortably day-to-day, and it should have been placed higher up so that it's easier to use. As for the green accent, it is very nice, and we do appreciate when companies think a little outside the box, though it does limit its scope for colour coordination. However, Sennheiser does offer replaceable cover plates (GSA 10), but as far as we can find there are only two on offer. The ones currently available are a DOTA 2 edition as well as one for SK Gaming, so maybe Sennheiser could offer plain black, white or even ones to compliment your style or setup. This would take the customisation to a new level and broaden the appeal of the headset that much more.

As for the software, it's nice but very limited in what it offers the end user. We think a simple 10-band eq and mic settings would solve this as it would give users the potential to tweak the sound and mic to their preference. And finally to the platform compatibility, this may be a non-issue for most, but there is a group that would use the GSP 550 with more than just a PC. This is addressed as Sennheiser offer a console cable, but with a cost of £12.99 ($16.30 US / $24.95 AUS). In reality - for the price of the headset, it should have been bundled with the headset, rather than an additional item. Keep in mind though, that if you plan on using the GSP 550 with a console, you wont experience the 7.1 Dolby audio as that only works on PC.

Now to the strong suits and the first are the design and build. The GSP 550 has a design that will likely divide opinion, some may like the robust nature of the styling, whereas others will not. The build is very solid as it makes use of metal hinges and high-quality plastics. This does add to the weight which can cause some discomfort, but it is something that could be adjusted to over time. The next strong area for the GSP 550 is with the microphone, this built-in solution works very well and is clear detailed enough to be used for in-game chat, yet we wouldnt use it for streaming. Where the GSP 550 really does shine is in the sound department. The quality on offer is superb as its controlled, highly detailed, open, airy and has enough weight to be highly interesting to listen to. The Dolby feature is a bit hit-or-miss though and works better in some areas than others. Finally, if you opt to purchase via Sennheiser directly, the headset comes with one of Sennheiser's new gaming mouse mats, this does help increase the appeal that much more as it adds extra value to the headset. Bear in mind that this offer is only available while stocks of the mat last.

Does all this balance out to make the GSP 550 a viable choice? In a nutshell, yes. The GSP may have a premium price tag of £219.99 in the UK, $249.95 in the US and $399.95 in Australia, but we feel it does enough to justify that. Though there are some things we would have liked to have seen done differently, the overall package they offer is brilliant, and if you can live with the shortcomings, they are a great headset for music, movies and gaming. 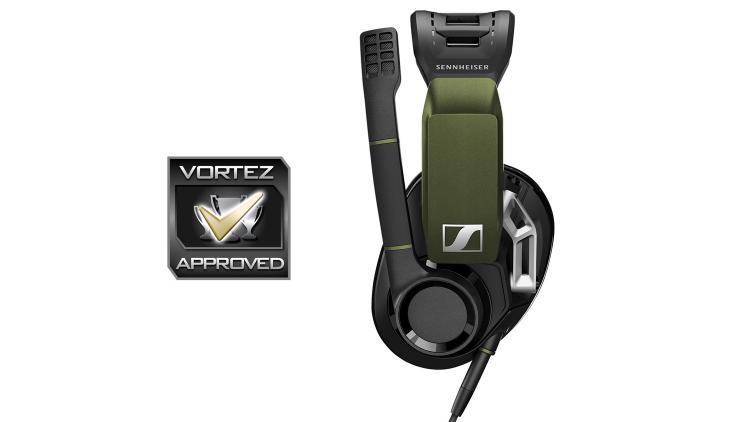 The Sennheiser GSP 550 is another great addition to the GSP family thanks to their superb audio performance and high-quality construction.

Cons
- Dolby dongle too far down the cable