👤by David Mitchelson  Comments 📅09-01-13
Conclusion
So weve reached the end of our review, has the monolith HE02 given good thermal performance results or has it just achieved silence only?

As soon as you take the HE02 out of its packaging the sheer size of this CPU cooler is a talking point just on its own. Its physical design is unique and something which is clearly distinctive. Its design isnt for the sole purpose of being different though, the shape, measurements and materials used all work together to help this cooler achieve fantastic results as a passive solution.

In our testing, HE02 climbed to the top of the passive leaderboard and confidently asserted itself as the new victor. The new record on our database wasnt set by the breadth of a hair; the result was by almost three degrees which is especially significant.

Whilst benchmarking with a cooling fan isnt out-of-the-box testing we still included this within our testing to give a better picture of what you can expect from HE02 should you decide to attach a fan. The results were again good, but they werent as impressive as we anticipated. This could be due to two reasons; compared to the other coolers we have tested at the high-end  faster fans could be a requirement but more likely  HE02 may not be designed to work so proficiently with cooling fans, afterall its intended use is as a silent solution, passive. The passive results on the preceding pages demonstrate HE02 versus all the other coolers without their high-RPM cooling fans and it delivered a devastating blow and this really shows that its make-up is where the triumph lies. 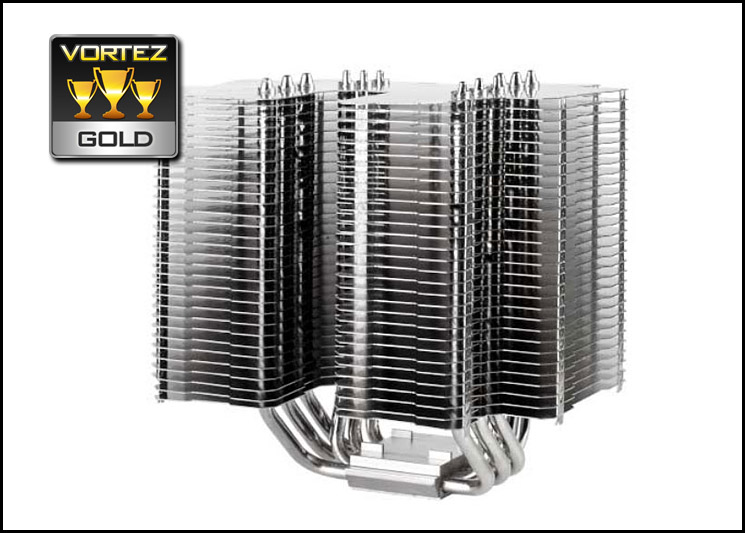 Using HE02 on an Intel Core-i7 3930K with stock settings yields good results but when the CPU is overclocked things start to become unstable, HE02 is not designed to entertain Sandy Bridge-E in an overclocked environment.

Priced at £53, HE02 is middle of the road in terms of comparing against other CPU coolers. True enough it doesnt come with cooling fans which other CPU coolers around this bracket come with, some would argue that fans usually bump the price up £10-15 but once again we draw your attention to the intended use and target audience  silence. Those who are wanting silence will probably not be interested in overclocking and therefore this cooler is ideal and based on its target audience its our pleasure to give SST-HE02 our prestigious gold award.

If you are on the pursuit for silence then HE02 is a master in its own class. To date, this is the best passive CPU cooler we have yet tested. SilverStone have both performance and silence covered, and if its these two factors you are seeking to achieve then we would certainly recommend you consider HE02.