👤by Matthew Hodgson  Comments 📅27-03-19
Conclusion
You may have noticed the lack of any gaming-related benchmarks in our testing, and thats down to the fact that the Ryzen 7 2700 lacks any kind of IGP (Integrated Graphics Processor) so the system relies on you installing one of your own; Stormforce dont make this clear on their product page and youd be forgiven, especially as a novice, to thinking that an HDMI port on the motherboard would result in a useable system straight out of the box (with a power supply and storage, of course) but this is limited to only a few AMD Ryzen CPUs such as the 2200G or 2400G.

Due to having to install your own GPU, which could range from something like an AMD Radeon R7 240 all the way up to an NVIDIA RTX 2080Ti; obviously these two GPUs are worlds apart, both in cost and performance, and would offer entirely different results; results that most likely will not reflect your particular GPU. For this reason, we havent included any gaming results at all, instead focussing on the CPUs power only.

Having said that, the Ryzen 7 2700 and 16GB of HyperX Fury DDR4 are very appealing and offer an excellent basis for a high performance system, giving you the flexibility to choose a GPU you like, as well as storage, chassis and power supply, to keep things at their bare minimum. However, someone who is buying a barebones system such as this will be privy to websites such as Overclockers, Scan, ebuyer or Novatech, to name just a few, where the component parts can be found for roughly £45 less, or if youre happy to choose a different brand of RAM, up to £80 less for, arguably better performance at a higher frequency. Now, this is where the Stormforce value comes into play. Not only have they assembled the bundle, theyve also overclocked it (well talk about this in a second) and stress-tested the system; but the real jewel in the crown is the three-year collect, repair and return warranty, where theyll fix whatever issue arises and supply the bundle back to you in a working condition. If that peace of mind is worth roughly £45 to you then this is the bundle youre looking for.

Moving onto Stormforces claims surrounding overclocking the bundle, were unable to find any overclock at all. The AMD Ryzen 2700 boosts to 4.1GHz straight out of the factory, which is all weve seen from the CPU in our testing, and the RAM, being the only other overclockable component, is running at its packaged frequency of 2400MHz. This, to us, isnt overclocked at all and is running in its stock configuration.

At the time of writing, thanks to AMDs offer, theres also currently a free Tom Clancys The Division 2 code included with each purchase. 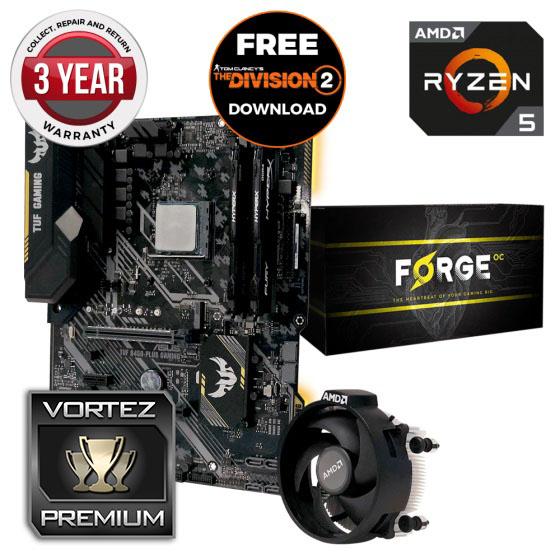 The AMD Ryzen 7 2700 will power through most tasks with absolute ease, and paired to a recent GPU, will provide years of high end gaming. The £45 premium can be easily justified with the stress-testing and the warranty but wed love to know where our overclock is.

Neutral
+- Price premium over individual components
+- You will need a GPU, PSU, chassis and storage to form a working system, as a minimum

There are currently 623 user(s) online:
Google