👤by David Mitchelson  Comments 📅02-09-11
Transfer/Power/Thermal Performance
We have looked at some of the features that DSM 3.1 brings on the DS411j but how does this affect performance? What are typical transfer rates like over a Gigabit network? Is power consumption reasonable? Does the unit keep the HDDs cool? These are all questions that you might be asking and we are here to answer them.

Combined with the testing for D411 will be a Toshiba STORE Steel 250GB USB drive, DS410 and DS211 to present some interesting comparisons.

First of all, for the purpose of real world testing I bundled together 6 files which were in 2 folders amounting to 3.2GB. I wanted to discover the incoming and outgoing transfer times between the DS411 and the computer - against other devices on a Gigabit network. Here are the results.

Temperatures were also monitored using the in-house monitoring software. Note: load temperatures during transfer did not present any change in HDD temperature. 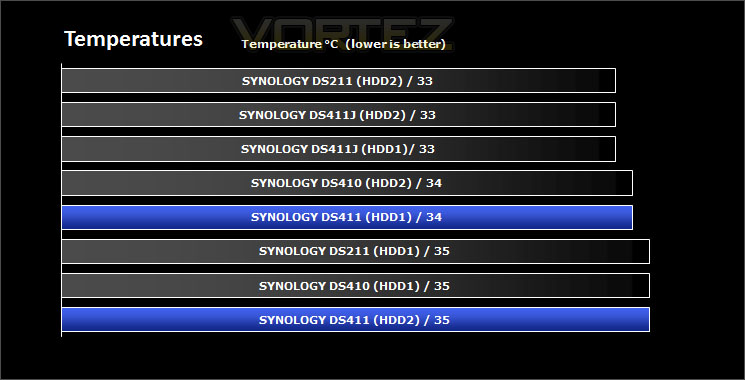 There are currently 340 user(s) online:
Google