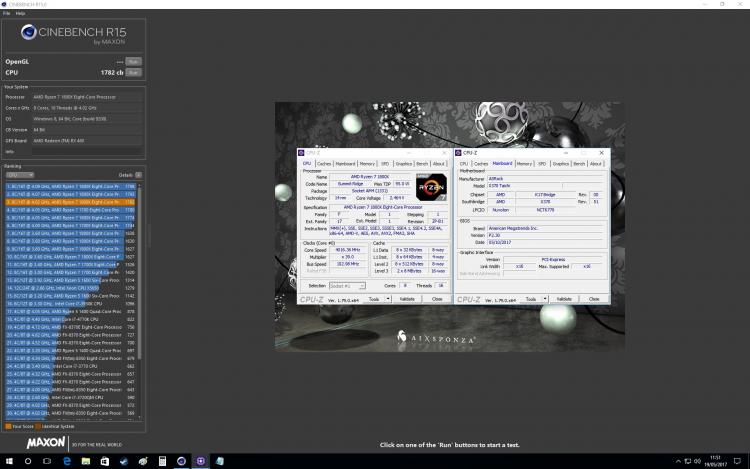 The ASRock BIOS was fairly strange to deal with in regards to overclocking, despite having a lush high-resolution BIOS, the options were in various places, and difficult to follow, especially in regards to setting manual memory timings. Though the option to adjust the baseclock was there, which will allow users to fine tune their overclock. We discovered that we could boot into Windows 10 using 3200MHz memory, but once the CPU was overclocked too, the high-speed memory caused instabilities, so for our overclocked Cinebench R15 run we had to reduce the CPU speed and memory speed to around 3000MHz. Final result was 4.02GHz @ 1.44V w/ 2993MHz Memory.

The ASUS ROG Crosshair VI Hero has a nicely laid out BIOS making it easy to navigate and find everything you need. We were particularly impressed as we were able to achieve our highest 'bench-stable' overclock yet at 4.09GHz @ 1.46V and 3200MHz memory. Despite the frequency advantage in both memory and CPU, it was unable to come out on top.

GIGABYTEs BIOS is fairly well laid out and easy to follow, but it would have been nice to access the primary overclocking features on a single page rather than various tabs. Again, the AX370-Gaming K7 was able to boot at stock CPUs with 3200MHz memory, but failed to hold that frequency once the CPU was overclocked. Final overclock result was 4.06GHz @ 1.44V w/ 3000MHz memory. 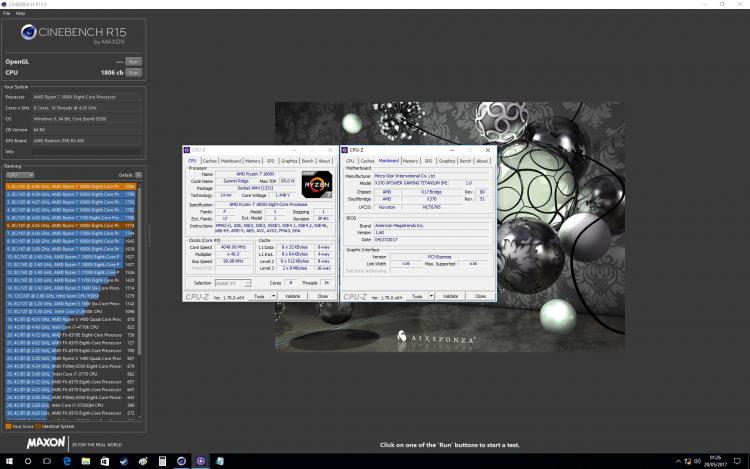 The MSI BIOS has a very nice UI making it easy to navigate through all the essential options, except we couldn't find where to adjust the base clock..? ooops? Despite this, the MSI, as with the ROG Crosshair VI Hero, was capable of holding 3200MHz memory with an overclocked CPU. Unfortunately, it was not able to break the 4.05GHz frequency that we have found to be a common wall with our chip, not to mention that it required a little more voltage than others. Our final OC result was 4.05GHz @ 1.45V w/ 3200MHz memory. At these settings, the X370 XPOWER GAMING TITANIUM beat the CH6H in Cinebench with a score of 1806 vs 1798. Sure it's marginal and likely within a range which could be achieved with some tweaks, but same could be applied to the MSI board also, so the performance results are very pleasing (clawing at the heels of the i7 6950X).