Thermalright are no strangers to dual radiator tower heatsinks. In fact they were one of the first to introduce the concept with their famous IFX-14 cooler. Although it never received as much attention as the much revered Ultra 120 Extreme, the IFX-14 was a revolutionary design that allowed users to attach up to three fans of varying thicknesses (25mm/38mm) so it proved highly efficient for brute air cooling performance. However, the Ultra 120 Extreme has now been succeeded by the superior Venomous X, which proved to be one of the best coolers we have tested here at Vortez, so its now the IFX-14s turn to undergo the same treatment. The result is the Thermalright Silver Arrow.

Some of you may notice that the Silver Arrow is reminiscent of the Cogage Arrow and thats because the latter was designed by the same engineer team. Cogage is a budget oriented company that falls under the umbrella of its parent company, Thermalright. Thats not to say that the Silver Arrow is a direct copy of the Cogage solution because it has undergone several refinements to deliver a highly polished product that is deserving of its Thermalright heritage. The most significant difference is the inclusion of Thermalrights latest TR TY-140 fans but more on that later.

Before we go onto the rest of the review, theres a certain other cooler I have to mention, the Noctua NH-D14. Noctuas flagship cooler is currently top of our charts and so far only the Venomous X has come close to matching it. Since the Silver Arrow sports a similar design, we can expect it to be an excellent performer. Whether it will finally take the crown from Noctuas long reign remains to be seen

Thermalright is an elite design house that manufactures cooling products for computer components for the best quality and performance your money can buy. In 2002, AMD released its first generation Thunderbird CPU and since then we have been there every step of the way to counter high voltage and high heat with innovative design and highly acclaimed cooling solutions not only for AMD but for Intel as well. One of early well known solutions was the SK-6. With many positive and rave reviews under its belt Thermalright bolted to the top as the heat sink manufacturer mostly preferred by overclockers and enthusiasts around the World. To this day, innovation never left our vocabulary as we keep coming up with leading edge designs staying ahead of the competition.
Lets move on to the next page for a closer look. 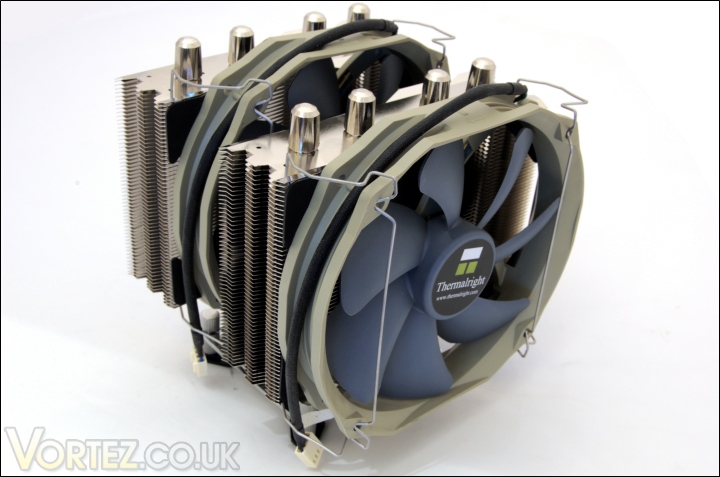