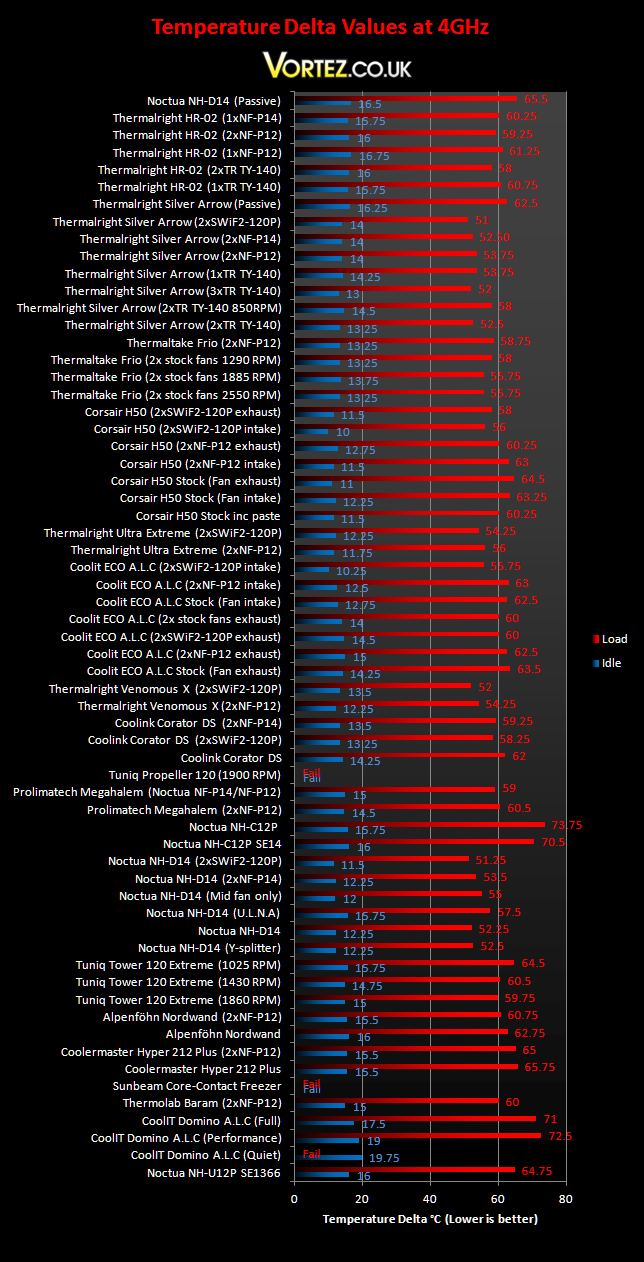 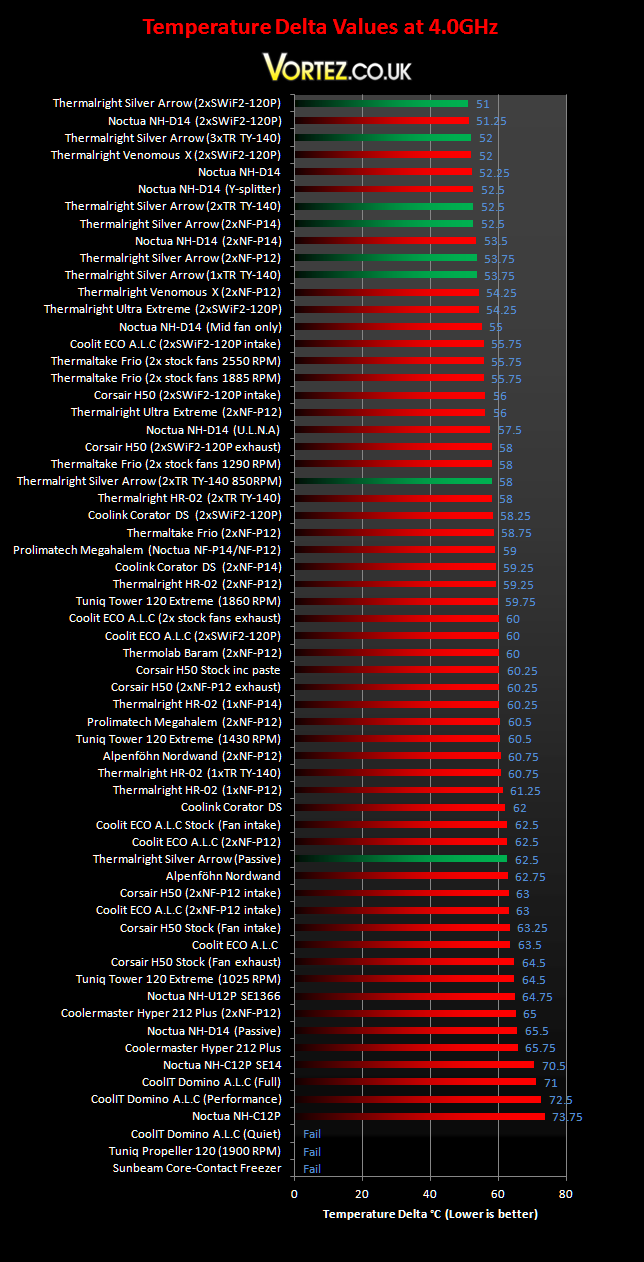 Most of you are probably more interested in the overclocked results so I will analyse the results here in more depth.

First of all, it's not hard to see that the Thermalright Silver Arrow has topped the chart, an impressive feat considering the competition it's up against. But let's start by looking at the stock configuration. When teamed with the two bundled TR TY-140 fans, the Silver Arrow falls behind the stock Noctua NH-D14 by a mere 0.25C and when both use their own branded 140mm fans, the Silver Arrow outperforms the Noctua (2xNF-P14s) by 1C. With both running their stock fans at low RPM, the NH-D14 comes out top again by 0.5C. So users not looking to change the stock fans should definitely consider the Thermalright cooler as a viable alternative to the Noctua. Furthermore, Thermalright are pricing their cooler at around £10 less making it a bargain.

*Note: The Noctua NH-D14 was tested with Thermalright Chill Factor II thermal paste rather than the stock NT-H1 paste which is inferior. So unless users buy some aftermarket paste, the Silver Arrow will perform better straight out of the box thanks to the inclusion of the Chill Factor III thermal paste.*

Since the Silver Arrow can support up to 3 fans (only two sets of clips are provided), I thought it would be interesting to see how performance scales up with the number of fans. With a single TR TY-140 in the middle acting as both a push & pull fan, performance dropped by merely 1.25C compared to using two fans. Interestingly, with a delta value of 53.75C, the Silver Arrow performs better than the NH-D14 also sporting just a middle fan. Scaling with a third fan was less dramatic, only improving temperatures by 0.5C. Saying that, this setup is a much quieter solution to using the Coolink fans. For a last test, the Silver Arrow was installed passively and still yielded stunning results to match the likes of the CoolIT ECO, Corsair H50 and a range of other high end air coolers!

To measure the heatsink's efficiency, several fan configurations were used for apple to apple comparisons with other heatsinks. Installing two Noctua NF-P12s and two Coolink SWiF2-120Ps, the Silver Arrow manages to outperform the Venomous X by 0.75C and 1C respectively. To compare against the Noctua NH-D14, we have to look at both using the Noctua NF-P14 and Coolink SWiF2-120P fans. The results show that in both situations the Silver Arrow comes out as the more efficient cooler, more so with the NF-P14s attached. This suggests that the Silver Arrow prefers the larger 140mm fans and further backing this up are the results showing the dual NF-P14 results bettering the NF-P12 results.

140mm fans are becoming more mainstream nowadays so it's worth investigating how those two stack up to each other. The results show that under load, both performed the same on the Silver Arrow but at idle the TR TY-140 has a 0.75C advantage. At stock clock speed, the Thermalright fan also has a slight lead.