👤by David Mitchelson  Comments 📅08-12-11
Testing Methodologies & Results
Our testing methodology for testing Power Supply Units is limited to the multi-meter to show each rails performance due to us not having access to an ATE load tester. We are making plans to invest in equipment as we were directed by Cooler Master when Simon visited their test labs in June 2010.

Although this does constrain us slightly we can still monitor fluctuations on the rails and give the unit a good assessment when we feature it in one of our builds. The way the testing will run is simple, voltages will be observed at idle wattage and then a single GPU will be installed within the system and a combination of OCCT and MSI Kombustor will be executed to provide simulation with just 1 GPU. This will be run for 10 minutes. After this another graphics card will be added to the system giving the setup a dual GPU configuration and again the stress tests will be applied and after 10 minutes voltages monitored. In both instances the CPU will also be overclocked to maximise power consumption and strain. This should give us a good indication of how the Thortech Thunderbolt Plus 1200W will perform under gaming stresses and beyond. Usually this test is performed on a unit with a rated wattage of less than 900W so this wont be as severe a test on a 1200W model due to the sustained load from 2 GPUs. 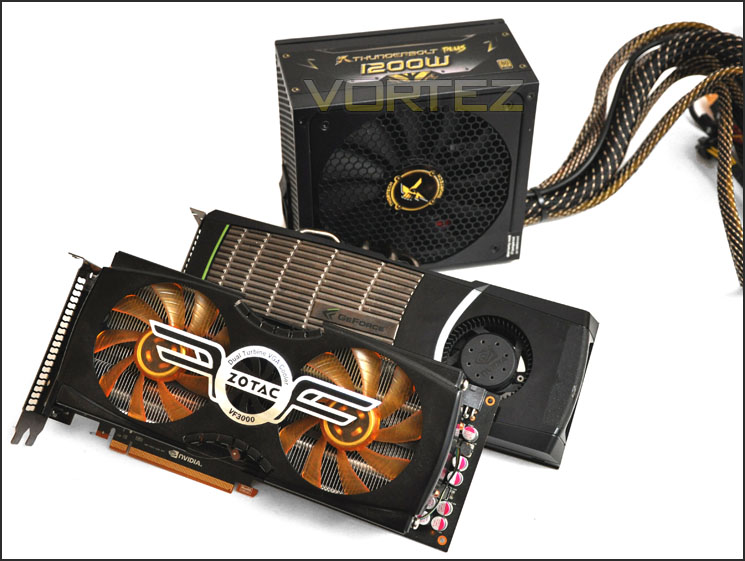 I deliberately configured SLI within this test system to give the PSU as much of a draw as it could take. We all know how Fermi is notorious for its big power draw! As I mentioned there is no ATE load tester available so generating as much power as possible is key to observing the fluctuations on the rails. 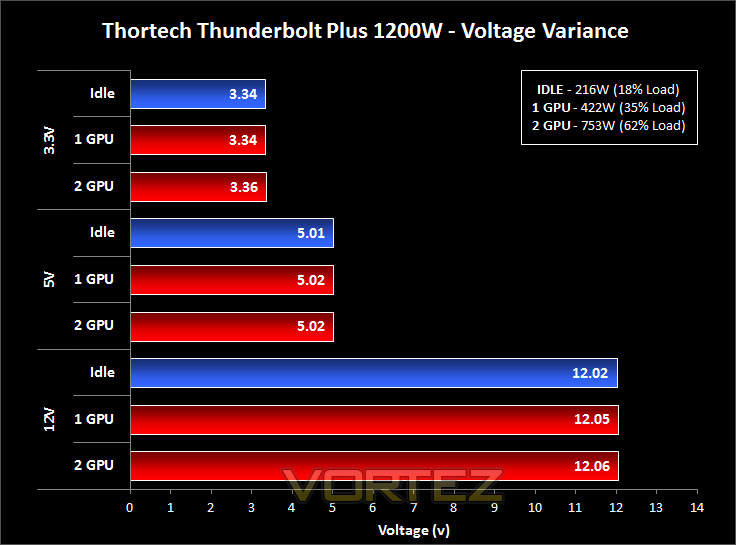 As you will appreciate, the total output from a dual graphics card configuration with CPU overclock doesnt generate anything near 1200W but even so  the results speak volumes for Thunderbolt Plus performance. 3.3V, 5V and 12V all remain within the realms of acceptable range within the ATX standards.

There were no sporadic voltage fluctuations or instability.

At 62% load the fan is noticeable. During full load with the test that was performed the fan did become quite noisy.