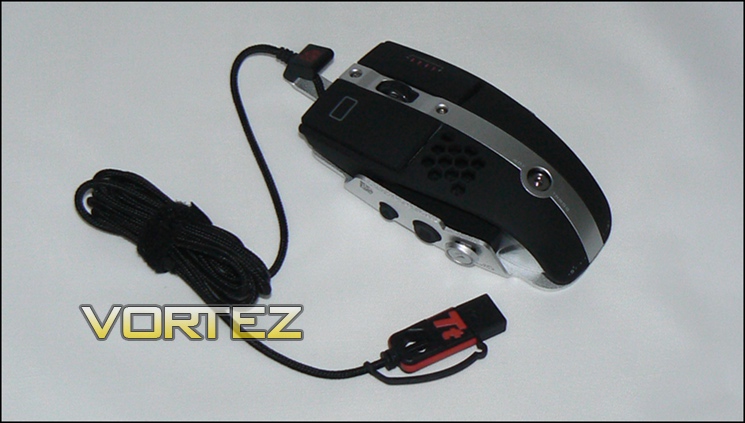 The first feature you'll notice of the Level 10M is the cut-away design of the top from the base, reminiscent of modular, adjustable mouse designs. Rather than mask this, the Level10M emphasises it as a design choice, exposing the palm arch's supporting pillar and two red-sheathed data cables. The top is a single piece of curved plastic, coated with a matte black rubberised and textured finish with the exception of a single stripe, making it a grippy surface for those who appreciate it. The same surface is used for the major mouse buttons.

Right-hand and left-hand buttons both have their own specific design flourishes. A four-LED DPI indicator is a feature of the RMB, whereas the LMB includes a rectangular cut-out in the matte finish. Centrally located is the scroll-wheel/third mouse button, which is superficially identical to the wheel of the Tt eSPORTS Theron reviewed last month. 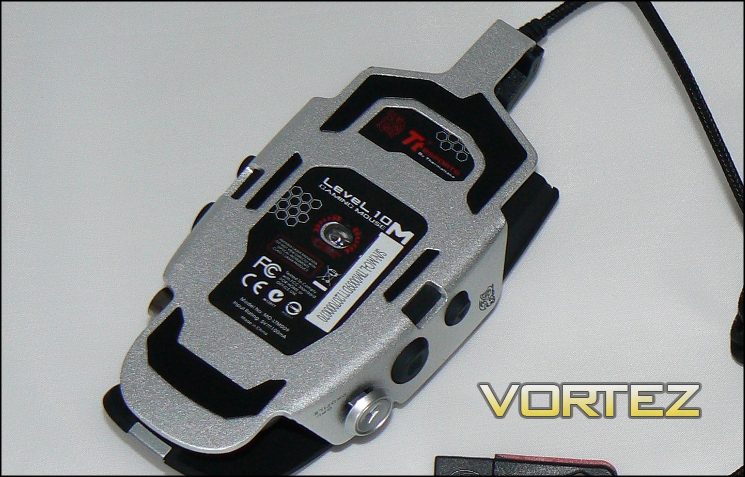 The Level 10M's base is a single piece of aluminium, swept up at the sides as mounting points for the buttons and switches. Although other manufacturers have been utilising aluminium bases for a while, Level 10M's use is more considerable, adding rigidity and weight for a more quality feel. With such a design it's extremely important that the mouse is level when sitting on the mousing surface, and the Level10M is that.

Four Teflon feet allows the mouse to glide over most surfaces, which it will certainly need to due to its weight. Unlike the Theron there is no facility to customise the weight, whilst balance is adjusted via a different mechanism.

The LHS features two standard micro-switch buttons (A + B) and one additional 5-way adjuster (lightning bolt). The two buttons are slightly rubberised, whereas the selector stick is plastic with smooth finish.

The position will feel a little awkward at first, though becoming accustomed to it as a DPI-selector is quite swift. In all likelihood you'll need to programme the selector for functions rarely needed 'in the heat of battle'. 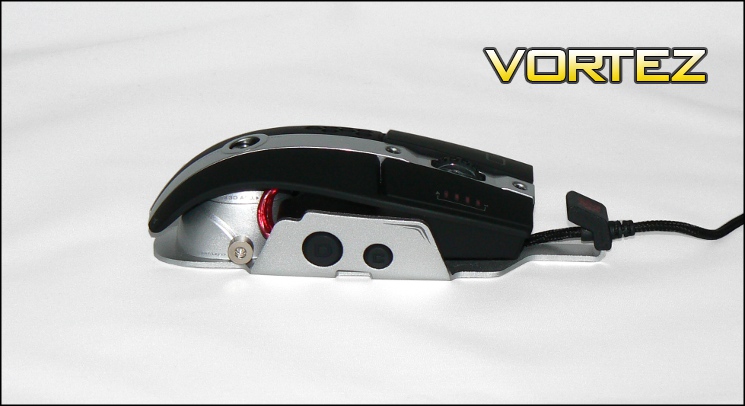 Far less prevalent on all the images you will have seen of the Level 10M are the two buttons (C + D) on the RHS of the mouse. By default, the software picks these up as configurable macro buttons, and so you can bind them to whatever you feel to be appropriate. How useful you find these will depend on the dexterity of your little and ring fingers, but the actuation force required is fairly low. Potential left handed users of the Level10M will obviously have a field day with them by comparison, although it's not really a true ambidextrous mouse.

To round off the package, Tt eSPORTS have braided the mouse cable for additional durability, and added a cap to the gold-plated USB plug to protect it in transit or whilst in storage. Sometimes, it's the small touches which are most pleasing.