👤by Matthew Hodgson  Comments 📅30-07-19
Conclusion
First things first, the Western Digital Gaming Drive provides a huge expansion for any gaming library, preventing the annoying process of finding and deleting older titles to make way for an upcoming launch, only to find you want to play it again in a couple of months. This will be particularly useful for trophy hunters or users with poor internet connections where downloads can take hours, or even days to complete.

The Gaming Drive is also very stylish, the black, glossy lid on the enclosure gives a premium finish while the blue cable and base catches the eye. However, having said that, the blue finishes can catch your eye a little too much, particularly if you own an original PS4 or a PS4 Slim, where the rear I/O lacks a USB connection. Plugging a bright blue cable into the front of your console will stand out like a sore thumb; only the PS4 Pro houses a single USB connection on the rear but we cant blame Western Digital for that.

Performance isnt bad at all for a 2.5 HDD, definitely more than enough to allow the loading of games directly from it, itll certainly keep up with the HDD installed within the system; having said that, we did find some erroneous results within our AIDA64 testing with buffered reads around 360MB/s and random reads in excess of 250MB/s however after running this past Western Digital, we were told this was typical behaviour. Weve repeated this result on multiple different platforms but we cant explain it unfortunately.

The biggest issue we see with this drive is the price. Western Digital themselves offer drives at a lower cost, without the PS4-specific branding, mind you. However, that doesnt detract from the fact that the PS4 will support any USB 3.0 external HDD. Is the blue cable and housing worth an extra £20-£25 for the same capacity? Were not so sure. 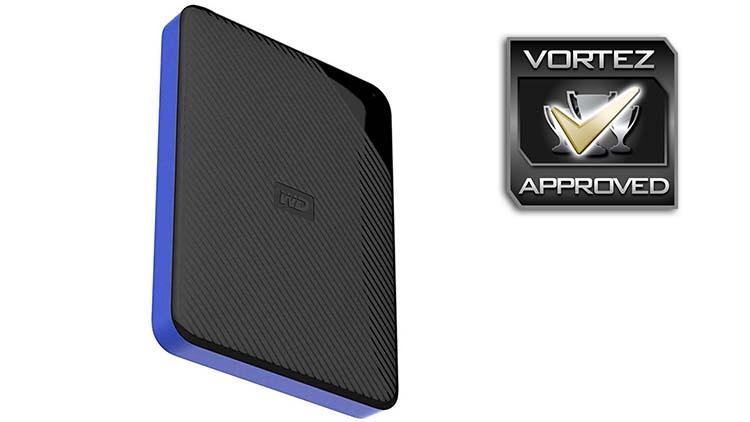 The drive looks great and performs as expected but the price premium is a bit too much for us.

Neutral
+- Will stand out considerably when plugged into the front ports on the PS4 or PS4 Slim.