'You're going to do what'? Is normally the first question out of people's mouths when you mention your intentions of watercooling your PC. To the uninitiated, water and sensitive,expensive electronics simply do not go well together.

In years gone by, watercooling was very much a dark art that went hand in hand with extreme overclocking. We would moan in the darkest corners of enthusiast forums about incompatible waterblocks, flow rates, debate which size tubing worked best and not least, which additive to use. While some of these discussions are still debated to this day, watercooling is much more mainstream and the extreme enthusiasts have since moved on to dry ice and liquid nitrogen to satisfy their cooling desires. DICE and LN2 though are still temporary measures, a quick fix for that World record run and while dangerous, they are the chosen materials for sub-zero cooling. The pitfall with subzero cooling is it is unsuitable for 24/7 operation. Many will argue that vapor change units also give subzero cooling however, they are for the most part, noisy, expensive, bulky and take time to warm up (cool down), sometimes up to five minutes before firing up the PC which negates the extra speed you would attain from using extreme cooling. 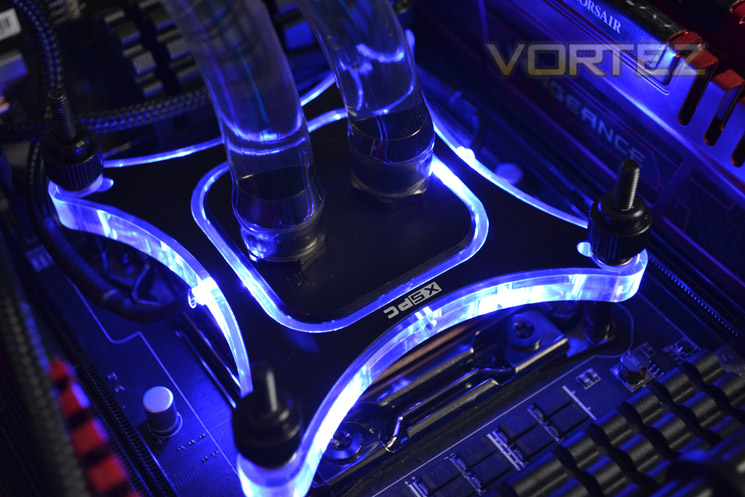 So, subzero is not the solution for 24/7 applications, vapor change is applicable but not very common for the reasons above. Water still remains one of the most efficient material to transfer heat and has perhaps evolved the most as an enthusiasts weapon in the battle against heat than most other cooling components. Today, it is possible to buy sealed units that are barely more difficult to instal than a standard heatsink. The general consensus is though that these units are little better than the high end air cooling heatsinks available. The choice was limited then to expensive custom built watercooling setups, enclosed pre-built watercooling units or aircooling.

Seeing a gap in the market, XSPC, a respected name in the custom watercooling arena, have put together a variety of their own components to create packages that take the hassle out of configuring your own custom watercooling setup by selecting all the components for you, right down to the nuts and bolts of the setup so the only thing you will need to add is water.

Today, we will be looking at the entry level XSPC watercooling kit, the XSPC RayStorm 750 RS360 and comparing this to enclosed watercooling (Corsair H100) and top end air cooling (Thermalright Silver Arrow SB-E).

There are currently 167 user(s) online:
Google