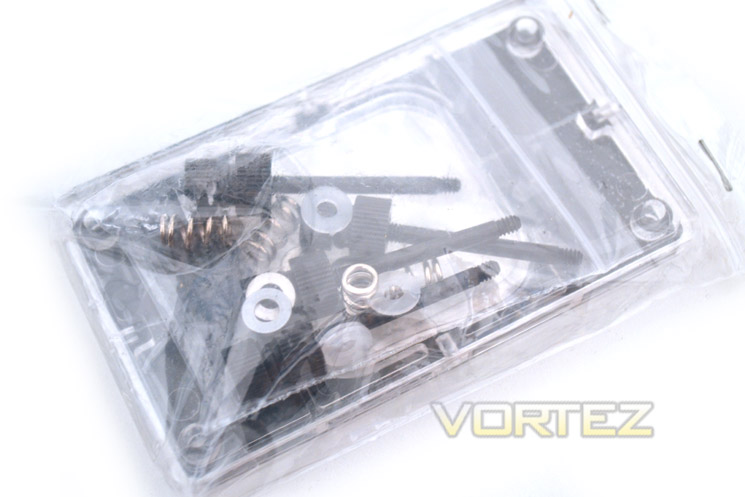 Upon opening each box you will be greeted with a set of fittings which is relevant to that component. Due to the modular design of the kit, many of these fittings are not required. So if you come to the end of your build and wonder 'what's this screw for'? Don't worry, it is likely that it is for a different CPU mounting kit. To keep everything neat and tidy though we would recommended not opening and emptying the screws onto a desk, only empty the ones which are specifically required as per the instruction manual otherwise the installation could become very confusing, very quick. 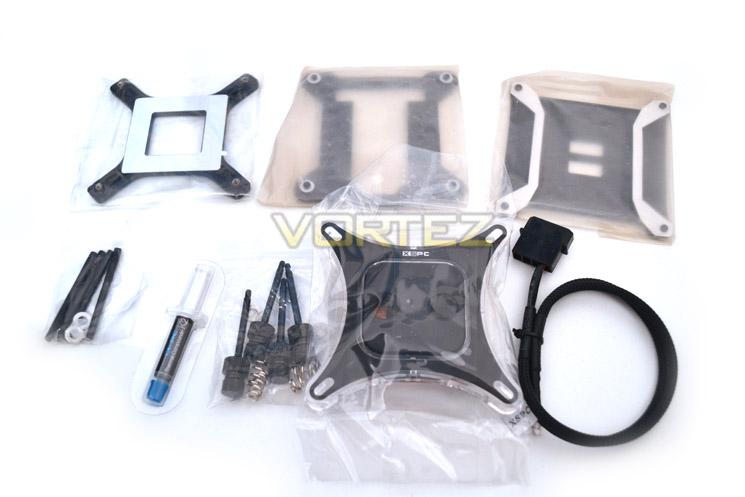 Above we see just some of the attachments that come with the Raystorm CPU block (discussed later). In the kit you get 3 backplates, four long thumb screws complete with springs and washer kit or a separate kit for LGA2011 which has 2 different thread sizes fir fitment to the socket itself. A small tube of K2 Thermal paste from XSPC is also included along with a MOLEX-LED lighting kit. 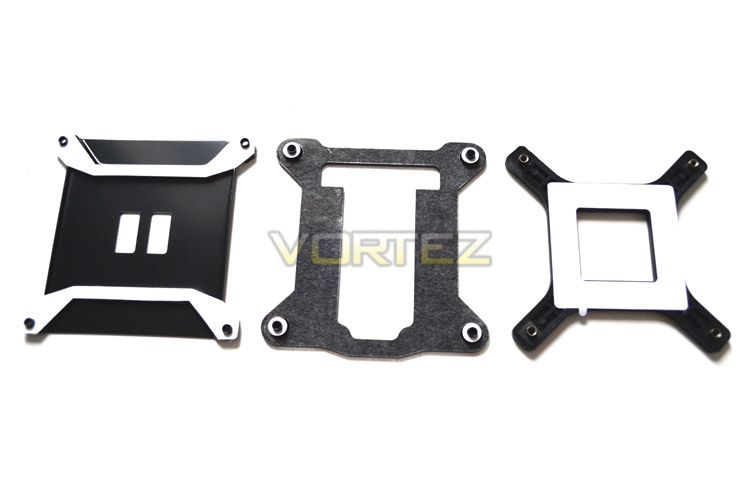 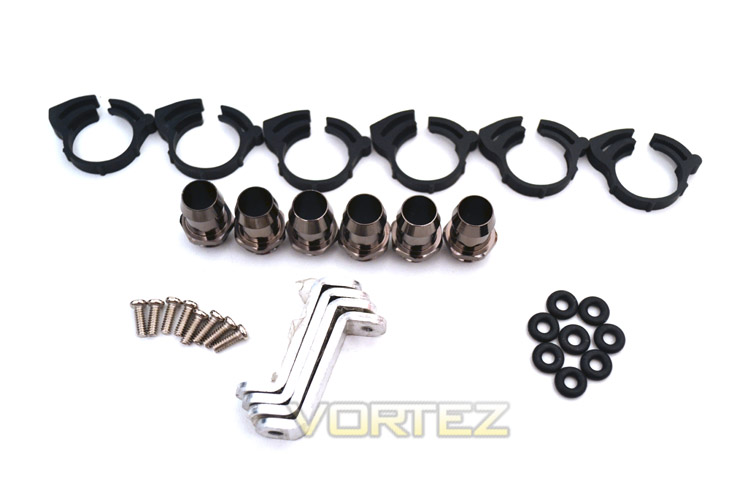 The watercooling fitments included in the package are, 6 1/2" 'black chrome' barbs which are gun metal grey in colouration along with 6 plastic tube clips. Also included is a radiator bracket pack which allows fitting of the radiator externally should you not have room inside the PC case. This brackets also allow you to fit the 120mm (x3) radiator fan size to a 80mm fan hole should you mount externally which is great for those who may have an older style case with no rear 120MM fan space. 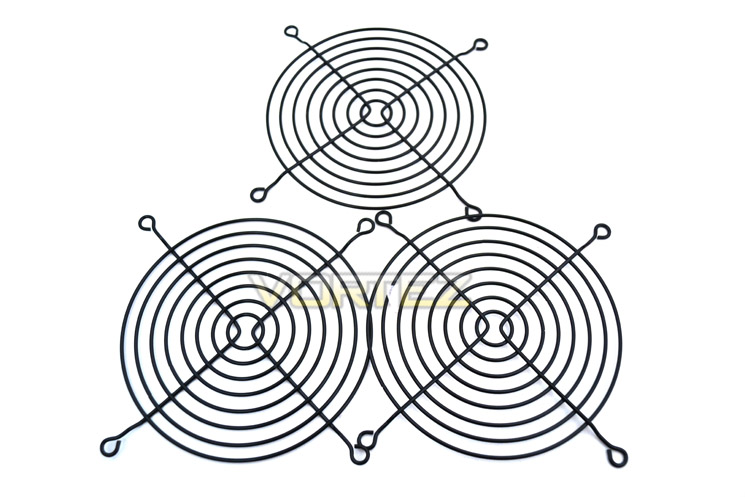 Three fan grills are included too which may appeal to those who mount the radiator externally which will prevent large objects (fingers) from getting chewed by the fans! 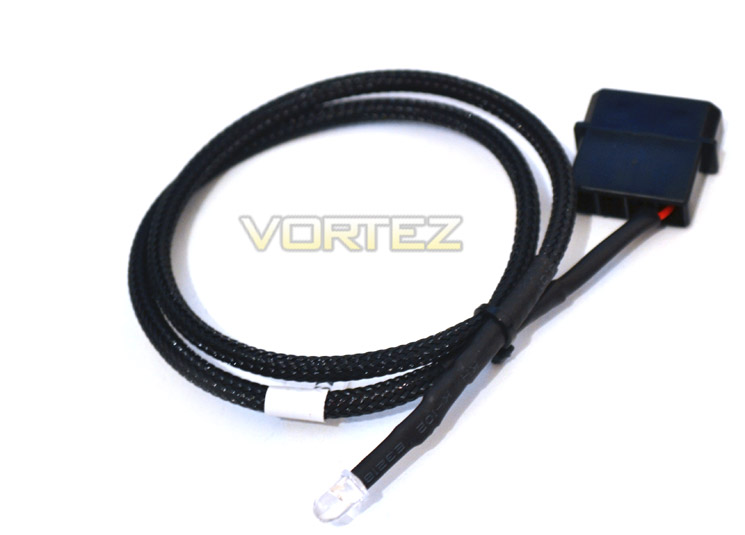 Both the CPU waterblock and the pump/reservoir combo are made of acrylic and have pre-drilled holes which allow the fitting of LED's. If you like blue then you are in luck because both components have separate LED kits included in the package. 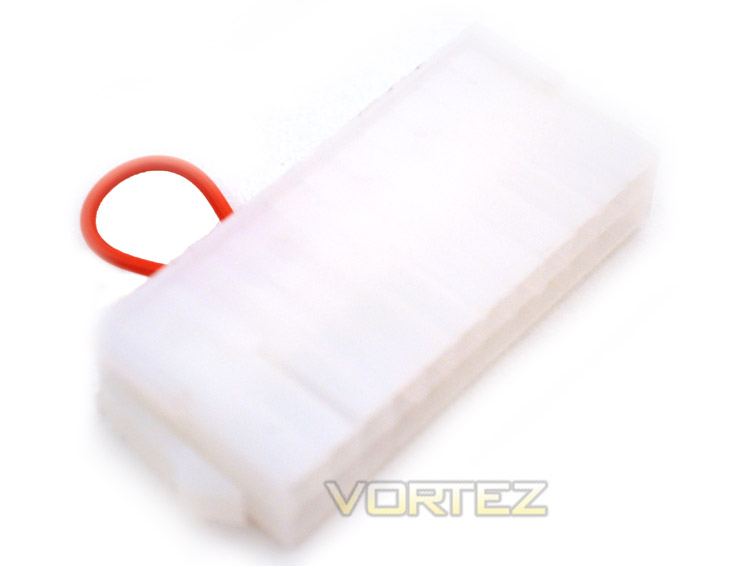 A great little addition to the kit is the PSU jump starter. This simple device is attached to the 24pin PSU cable to allow it to start and therefore allow you to 'prime' the watercooling setup. Normally, a psu would need to receive a signal from the motherboard to power up the PSU but priming a watercooling system, especially when leak testing, with all of your expensive system components such as the motherboard powered up while doing so is dangerous. Should your watercooling setup spring a leak while the motherboard is powered on, the chances are you could damage it so this cheap little bridge (it bridges the green 'signal' wire and black earth wires) allows you to power on the PSU without powering on your remaining components. It should be noted however that no power cables are attached to your PC while the PSU is jumped. 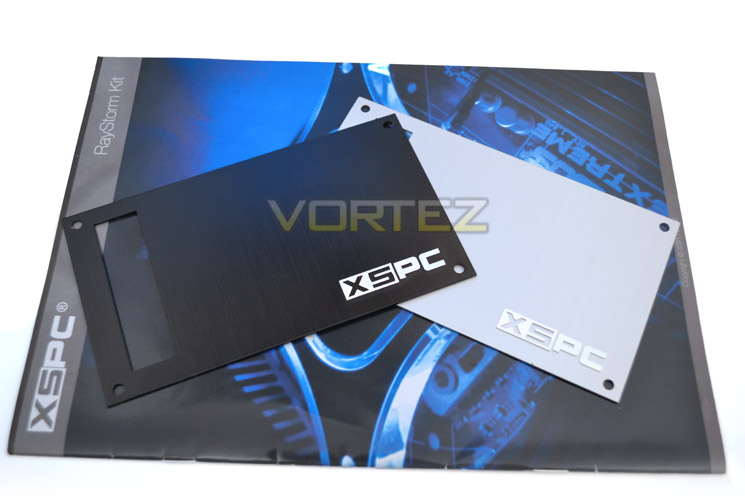 The reservoir has two faceplates which can be added for aesthetic value to match your case exterior. While the black faceplate would undoubtedly be the more popular, XSPC haven't forgotten about those who prefer the silver aluminium look.

Let's move on to the key system components...