👤by Sahil Mannick  Comments 📅23-01-11
Conclusion
Theres no doubt that Nvidias GTX580 is an impressive card. It leads the market as the best single GPU based graphics card with nothing within touch of its raw performance across all games and benchmarks. The only competition the card faces is from dual card configurations through SLI or CrossFire, which may also present better value for money. Nonetheless, it is hard not to be impressed by the GF110 GPU with its fully unlocked 512 CUDA cores and tolerance for higher frequencies than previous Nvidia flagship cards. The main purpose of the tweaked GF110 core has been achieved and users can expect lower power consumption, temperatures and noise levels thanks to the improved vapour chamber cooler and power management features. Even the latest Cayman powered HD6970 fail to keep up in that regard, a characteristic that was traditionally AMDs forte.

In terms of performance, the ZOTAC GTX580 follows the same suit as the ASUS card. Although I didnt give a card to card comparison for each benchmark (our previous ASUS GTX580 review covers that in greater depth), the performance trends are very similar. The ZOTAC GTX580 outperformed the superseded GTX480 by an average of 16%, in line with the 17% theoretical boost we expected from the 32 extra CUDA cores and higher clock speeds. Compared to AMDs offerings, the GTX580 lead the HD6970 by approximately 19% looking at stock speeds. The HD6870+HD6850 CrossFire combination was only 2% behind the GTX580 when averaged across all the benchmarks. 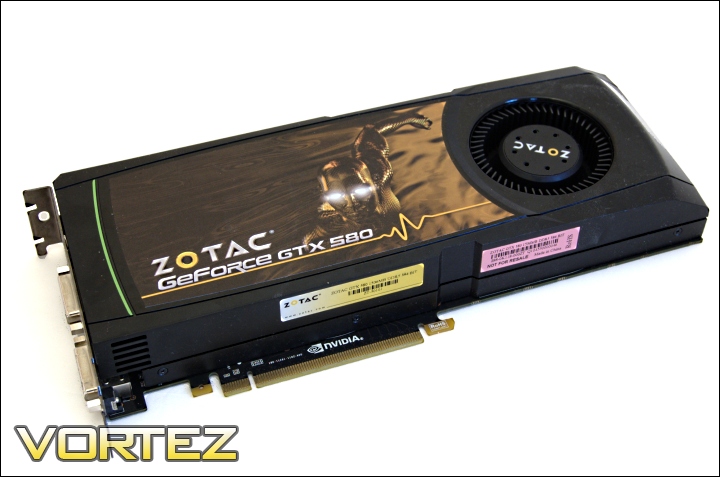 Taking prices into consideration, the GTX580 doesnt fare as admirably. The GTX480 is now priced at £250 whereas the GTX580 sports a hefty premium that places it above the £400 bracket. The performance gains alone do not warrant the £150 price hike and if users want the benefits of the GF110 core at a cheaper price, the GTX570 is a much more attractive alternative. Similarly, the HD6970 can also be found below the £300 mark, making it better value for money. Then again, diminishing returns has always been the drawback of high end graphics card whose purpose are to create a halo effect for the rest of the manufacturers line up. In most situations, users interested in the sheer performance of the GTX580 wont let the price hinder their judgement and the results will meet their expectations.

Comparing the ZOTAC and ASUS cards, both use the same reference design and as such sport the same components, circuitry and cooler. The ASUS comes pre-overclocked by 10MHz on the core but performance wise, there is less that 1% on average between the two cards over the whole suite of benchmarks. One concerning observation was that the fan on the ZOTAC card had to work harder to maintain low temperatures, consequently making the card louder and intrusive under heavy load, something I didnt experience with the ASUS card. This issue is probably reserved to our particular sample.

On the whole, ZOTACs GTX580 live up to the expectations Nvidia has built and ZOTAC themselves have made their card a more attractive prospect by bundling a free game and offering a lengthy 5 year warranty. It has always been the finer touches that differentiate one manufacturer from the vast selection of cards available in shops and ZOTAC have ensured that theirs offer the best support and longevity.