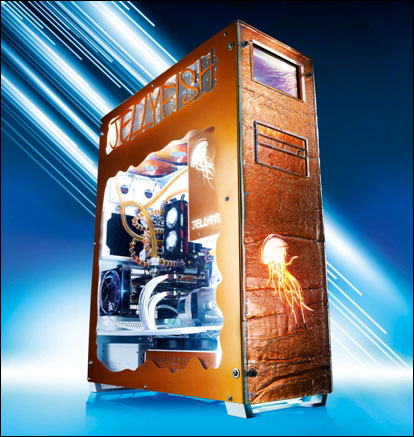 The annual Custom PC Dream PC contest pits the UKs most accomplished PC system builders against each other in a no holds barred competition to build the ultimate performance computer. This years winner is the Scan 3XS Jellyfish, a masterfully designed and engineered system based around an overclocked Intel® Core i7-975. Helping the Jellyfish to victory is a pair of Corsair X256 Extreme Series solid-state drives in RAID configuration, 6GB of 2000MHz Corsair Dominator GT DDR3 memory, and the award-winning Corsair Obsidian Series 800D chassis.

The fact that this years winning Dream PC uses Corsairs full tower case, DDR3 memory and solid-state drives clearly demonstrates that to build the worlds best custom PCs, you need to use the worlds best components, said Jim Carlton, VP of Marketing for Corsair, Were extremely proud that Scan Computers selected Corsairs hardware for their winning system and would like to congratulate them on their astonishing achievement in building such an incredible Dream PC.

Scan has consistently worked with Corsair for each Dream PC competition, and our joint success is evidentthree consecutive Dream PC titles. No other company has achieved this, which is testament to both the unrivalled skill of the Scan 3XS team and the quality of the components used, said Elan Raja III, Director of Scan Computers. For the best results, you need the best hardware, and thats why the Scan 3XS team consistently chooses Corsair.

Full coverage of the Dream PC 2009 contest will be in the December 2009 issue of Custom PC, on sale on 22nd October. Videos showcasing each Dream PC are also available on Custom PCs sister website: http://www.bit-tech.net

The 3XS Jellyfish can be purchased from Scans website at: http://3xs.scan.co.uk/ShowSystem.asp?SystemID=1036

Sharkoon introduces two all new high-performance, and quiet, Tower-coolers for the AMD- and Intel-processors. The Sharkoon Silent Eagle CPU cooler options are the Model C92 with a 92mm fan and Model C120 with a 120mm fan. Both provide four U-equalizing 8mm cooling heat pipes and premium aluminium fins for efficient heat dissipation. This is further strengthened by the Direct-Touch-Technology: The heat pipes rest directly on the processor, so that the heat is released directly without having to detour through an extra plate to the cooling fans. 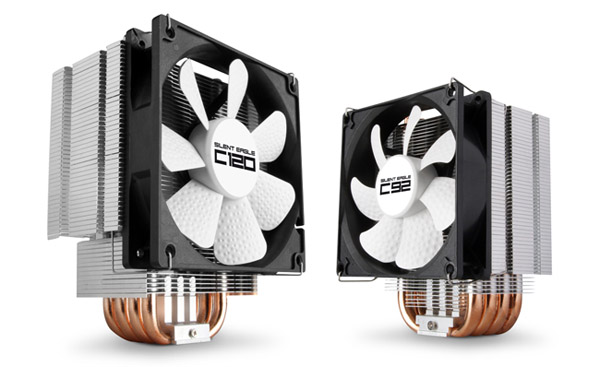 Contained within shipping are the installation materials for the AMD Socket 754, 939, and AM2/AM2+, as well as the Intel Socket 775 and 1366. The C92 uses a practical Push-Pin fastener for assembly to the Intel system; the larger C120 must utilize the supplied stable back plate. Additionally enclosed within shipping is a tube of thermal grease, a spatula, and instructions in eight different languages. On further up coming shipments, mounts for Intel?s latest Socket, 1156, will also be available.

Treyarch has released patch 1.6 for Call of Duty: World at War - bringing a host of fixes along with some additional multiplayer maps.

There are three new multiplayer maps namely: Battery, Breach and Revolution. The update log looks a little like this:

"When it launched last year, the Core i7 platform redefined Intel's high-end processor segment. Unfortunately, the platform was also accompanied by high-end prices and, as such, has seen only a minimal share of the desktop market. Today, however, Intel is releasing a new platform that it claims will bring the performance of Nehalem to mainstream price points. Referred to as Lynnfield, the new platform shares its core microarchitecture with the i7-900 series, but introduces a completely new chipset and socket design. This means that not only will we see new processors, but new motherboards as well. Benchmark Reviews has been testing several of these new items and will be covering the launch in detail over the next few days. In this article, we examine the Intel Core i5-750 Quad Core Processor."
... >>>

"Well everyone another wait is over Intel has launched their much anticipated Core i5 and Core i7 LGA 1156 (socket) processors as well as the new Intel P55 chipset. Many of us have been waiting on a more affordable solution from Intel that will compete with or best AMDs line of mainstream processors the Phenom II, finally Intel has answered.
The Intel Core i5 and Core i7 line of LGA 1156 processors start at price points that beat or meet AMDs Phenom II processors. The Core i5 and i7 processors combined with the new Socket LGA 1156 Intel P55 motherboard and chipset boast the potential to bring a new level of performance to the OEM and DIY market. The new Core series should provide more powerful processing power for gaming, digital media and every day computing at a price that is more affordable than the existing Core i7 LGA 1366 series."
... >>>

"Gigabyte is not only a manufacturer of mainboards and graphics
cards, they also manufacture some nifty computer accessories, which I will
be taking a closer look at today. We have previously only reviewed graphics
cards from Gigabyte. This time we will be taking a look at a rather
exclusive product, a stylish mouse called "Gigabyte GM-M7800S Swarovski
Crystal Mouse". By the name and looks of it, we can be sure that Gigabyte is
aiming this product towards people who are sensitive to fashion and
trends..."
... >>>

"It's OK to arrive fashionably late to a party, as long as you have something to add. ASUS has been offering their MATRIX branded video cards to the public well after the initial buzz has died down, for each GPU launch. The 9800GT and 4870 MATRIXcards were released in 2008, followed by the GTX260 MATRIX in early 2009. ASUS now releases the GTX285 MATRIX featuring the fastest single GPU available, supplied by NVIDIA. Benchmark Reviews looked at the ASUS ENGTX285 TOP back in January, which drew heavily from the NVIDIA reference design. Let's take a closer look at how they've stretched the limits on their latest offering, which is anything BUT a standard design."
... >>>

"Yesterday I took a look at a CPU cooler from Arctic Cooling, the Alpine 11 Pro, today I've got the Accelero L2 Pro VGA cooler for review. I've installed it on my ECS Nvidia GTS250 video card and I can say it does a better job than the stock cooler and it's much quieter, but it takes up three slots because of its height so depending on your setup you might have an issue with installation."
... >>>

"Up on the review block tonight Ive got one of the most anticipated games of 2009, The Beatles Rock band for the Xbox360. The Rock Band series has been well received overall but with this special version I believe theyve taken the Rock Band experience to a whole new level."
... >>>

"Today for review I've got the new Arctic Cooling Alpine 11 Pro CPU cooler. This cooler is small in size, and it's actually compatible with both LGA775 and 1155/1156 sockets so you'll be able to use it on that new upgrade you're planning on doing. The Alpine Pro 11 is a black style cooler, meaning it's a solid block of aluminum, no fancy heatpipes, this is old-school style cooling at its finest. I've put it up against the stock Intel cooler on my C2Q6600 CPU for comparison and found it's a decent upgrade over the stock cooling solution. It's small size make it great if you're short on room in your case, and it's silent as well, so it might make a nice cooler for an HTPC setup. Read on..."
... >>>

"It seems like it was only yesterday that we were carrying our lives on 3.5 floppy disks stored in plastic cases. Today we have a wide variety of storage media from CDs, DVDs, Flash Drives, and SDCards to name a few. The most popular of these seems to be Flash Drives. Who would have known that started out as an expensive 64mb novelty is now a must have item in every persons personal items. Today we are going to take a look at a new product from Verbatim, the Verbatim TUFF-CLIP USB Drive 8GB. Its the clip on this little unit that sets it apart from other flash drives. But how does it hold up to testing? Lets find out, shall we?"
... >>>

"ASUS' P7P55D-Deluxe motherboard is a socket 1156 Core i5 platform representing the flagship feature set. Along with the obvious support of Intel Lynnfield socket 1156 processors, the ASUS P7P55D-Deluxe motherboard features three PCI Express 2.0 x16 videocard slots for multi-graphic card set ups. Further expansion comes via a pair of PCI Express x1 and PCI slots. The P7P55D-Deluxe supports ATI Quad-GPU CrossfireX and nVidia Quad-GPU SLI, though you'd be hard pressed to find many users clamoring for a Geforce right now. There are four dual channel DDR3-1333/1066 memory slots which can accommodate up to 16GB of DDR3 RAM. Memory can be overclocked to run at DDR3-2133/1600 speeds with compatible modules."
... >>>

"Cool Age, a company youve probably never heard of before, is starting to stir up some competition in the CPU Cooler market with their newly revealed X120TF heat sink. The Korean heat sink manufacturer has managed to develop a heat sink boasting 6 copper heat pipes and a unique fin design which Coolage call Wind Tunnel Technology. But is this CPU Cooler really all what its cracked up to be? Today well find out in our review on the Coolage X120 Transform."
... >>>

"The graphics card industry has always been a jungle for most consumers. There are just so many models and manufacturers to choose from and it can be overwhelming to try to get a grip of the market. And graphics cards don't come cheap. For a high end graphics card you will have to put up more cash than for a complete gaming console like Playstation 3. Therefore we decided to take a look at what we can expect in terms of performance and value from a card in the midrange segment..."
... >>>

"The price on the Radeon HD 4850 has dropped again, so we've decide to keep it in the budget system. If you're not into gaming, drop the videocard and enjoy a new Athlon II computer system for $460... PCSTATS ShoppingList is a guide to help you get good PC gear, because it's filled with suggestions we'd actually buy ourselves."
... >>>

"When buying a laptop performance, temperature, and storage are the major deciding factors. What if I told you one product could improve your laptops performance, decrease temperatures and also increase storage space? If you say I am crazy thats is fine if you are indifferent that is fine as well but I digress; my point is this Cooler Master has launched another great Choiix products called the Air-though Stash some of our return readers may remember the Mini Air-Through we did not too long ago. The Stash is the Minis big brother. Not only can it cool and work as a USB hub like the Mini, but it can also double as a HDD enclosure essentially making itself a one stop shop for any Laptop lover. Lets get a closer look as see what you think:"
... >>>

"Mionix is a relatively new company to the United States market, theyre primarily a gaming peripheral company thats actually based in Sweden and theyve recently contacted me to review a couple of their products. What I have for review today is their gaming mouse called the Saiph 1800, the 1800 stands for the maximum DPI setting of the mouse, and the Saiph name comes from a star in the constellation Orion. The Saiph 1800 is a star in more ways than one really, in my time with this mouse Ive come to like it quite a bit, it feature seven DPI settings, two side buttons, and it has a nice, comfortable design as well. So continue on to learn more.. "
... >>>

There are currently 403 user(s) online:
Google