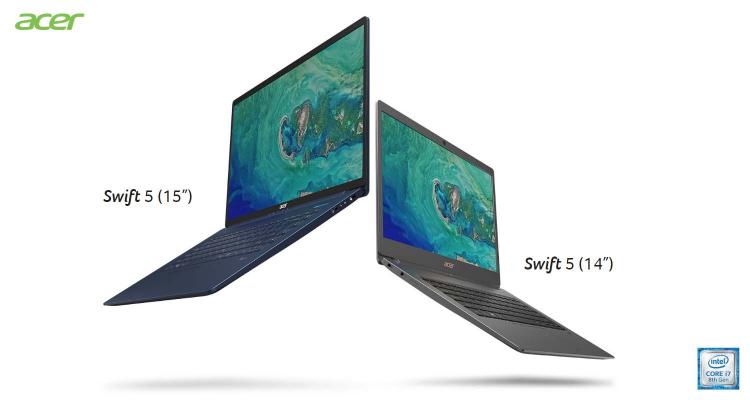 The Acer Swift 5 (SF515-51T) is packed with the 8th Generation Intel Core i7-8565U or Core i5-8265U processor that delivers responsive performance with up to 10 hours of battery life. The Swift 5 features a sleek, light and ultra-thin chassis thats made of a magnesium-lithium alloy that offers an ultralight but durable structure. The Acer Swift 5 can house up to 16GB of DDR4 SDRAM and up to 1TB NVMe PCIe solid-state drive for high-performance storage and memory needs. For connectivity, the Swift 5 packs a 2x2 802.11ac Gigabit wireless along with USB 3.1 Type-C Gen2 ports delivering 10Gbps transfer speeds.

The Acer Swift 3 now include new models with 13.3-inch and 14-inch displays options. It also sports slimmer bezels, sleek aluminium designs that open 180-degrees. It now comes with an integrated 4G LTE along with fast 2x2 802.11ac wireless connection. The Swift 3 models can house up to 8GB RAM and up to 512GB NVMe PCIe SSD with up to 13 hours of battery life. The Swift 3 also has an optional NVIDIA GeForce MX150 discrete graphics.