While this doesn't mean that it can't be implemented elsewhere in the world, it would take six of the eight remaining nations that include: Singapore, USA, Australia and others, for it to go ahead. Considering the resounding defeat the bill has had in the EU, it would be unlikely for that many to register their support.

In total only 39 MEPs supported ACTA. There were 146 abstentions, with a total of 478 people voting against it. 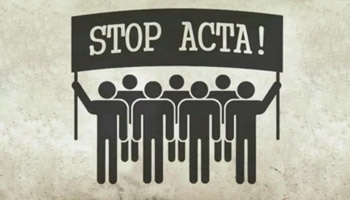 Leader of Pirate Party UK, Loz Kaye, released a statement discussing the ruling: "I'm pleased the MEPs have listened to the millions of people who contacted them and came out on the streets to protest against ACTA, instead of being misled by the empty promises of industry lobbyists."

"This must signal a start for a new way of doing politics. No more should international agreements be negotiated behind closed doors and simply rubber stamped by parliaments. Policy must become something that happens with the people, not to the people."

With ACTA likely dead in the water, attentions must focus to the next internet privacy and freedom threats. CISPA is one of these, but there are others.

Rejecting ACTA was a major warning to copyright lobbyists that the internet will not take censorship lying down. We just need to keep that up.