Active Shooter Game Removed From Steam After Backlash and Outrage


An upcoming game entitled Active Shooter developed by Ata Berdiyev, a Russian game developer, has been pulled out of Steam after an outburst of negative feedback and backlash from both the gaming community, politicians and the netizens. Many called out this controversial game to be outrageous and inappropriate. Active Shooter is a first-person shooting game that puts you in a school mass shooting where you get to play as an 'active shooter'. The game was listed on Steam and was said to launch on June 6th.

While there are many FPS games available today, Active Shooter's content that plays around the violent school mass shooting incidences which just hit the red flag in the hearts of many. The game triggered a wave of outrage across the globe particularly in the United States where a significant number of school shootings calls for gun law reform and mass awareness of such dangers. 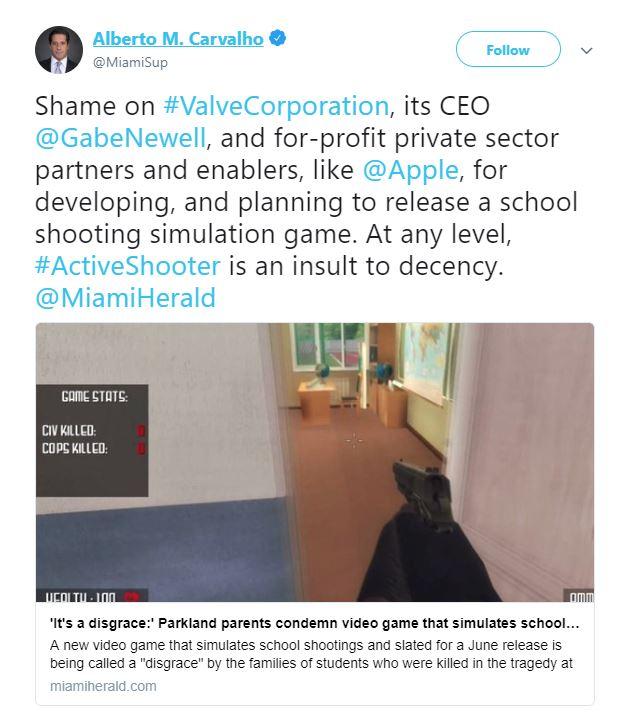 A petition at change.org has been launched by a Stephanie Robinett calling Valve to stop the launch of Active Shooter calling the game morally corrupt but legally fine. As of this writing, 232,411 individuals signed up in favour of the petition.

Not only did Steam removed the game from its listing, Steam has also removed developer Revived Games and publisher ACID from Steam, the developer, and publisher that houses Ata Berdiyev. As of this writing, the game is no longer available at Steam with the link https://store.steampowered.com/app/866890/Active_Shooter/

« TEAMGROUP Provide Details Of Their Computex 2018 Product Showcase · Active Shooter Game Removed From Steam After Backlash and Outrage · ROCCAT Showcases The Titan Switch; Debut Products To Be Unveiled At Computex »