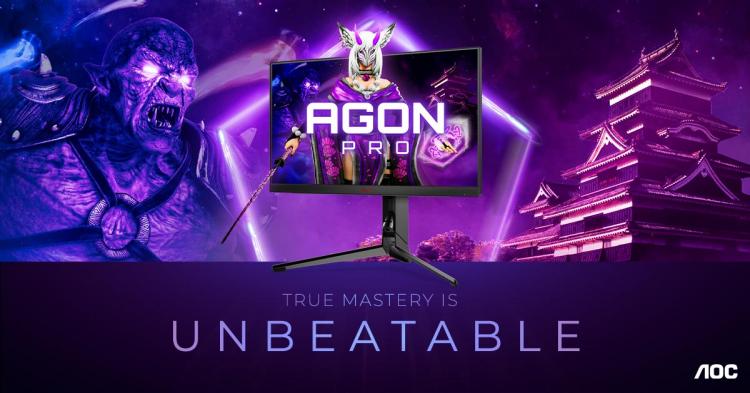 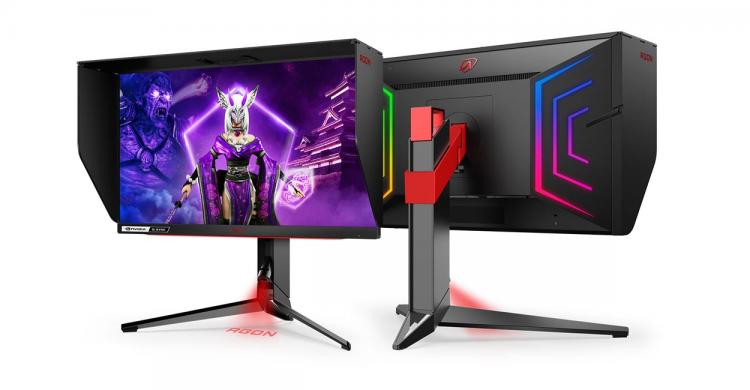 Built for Serious Gamers
The 24.5" AGON PRO AG254FG sports a powerful design for gamers having a three-side frameless frontal design to reduce distractions and a shadow shield that increases visibility when the stage lights shine bright during tournaments. On the backside, the monitor features strong lines and striking accents of the AGON Light FX RGB lighting, which provides 14 lighting modes and customisable via the AOC G-Menu. The AGON LED logo projection on the front also increases the flair for gamers to show their unique gaming style.

360Hz Refresh Rate and 1ms Response Time
The fast IPS panel of the AGON PRO AG254FG comes with exceptional features: it offers a 360 Hz refresh rate, and the 1 ms GtG response time ensures the visuals are displayed without artefacts such as ghosting. The Full HD resolution on this 24.5 monitor results in the crisp, sharp visuals esports gamers love, and enables the users GPU to show its full potential in terms of speed and framerate. The gaming monitor also supports 110% sRGB coverage and has wide viewing angles of 178°/178°. It also passes VESA DisplayHDR 400 certification.

NVIDIA Reflex
As a first in AGON by AOC monitors, the AGON PRO AG254FG comes with the NVIDIA Reflex technology to reduce system latency to unbelievably low levels. By integrating the NVIDIA Reflex technology, game developers can eliminate the GPU render queue and reduce CPU backpressure in GPU-intensive scenes. Additionally, the built-in NVIDIA Reflex Latency Analyzer can measure the exact time between a click from the mouse and changing pixels on the screen, which was previously only possible with high-speed cameras and special equipment.

Gaming Features
The AGON PRO AG254FG packs an ergonomic stand wherein users can adjust height, swivel, pivot, and tilt the display. The 4-port USB hub enables gamers to connect their mouse and keyboard directly to the monitor, while the 5W stereo speakers with DTS sound offer punchy sound for daily use when headsets are not required.

To adjust the monitor to their preferences, users can either use the included wired remote, the QuickSwitch, to flick between various settings, or use the AOC G-Menu software on their PCs. Additional gaming features include the Dialpoint (crosshair overlay) to help players improve their aim, Frame Counter to show frames per second information on any of the four corners, the AOC Shadow Control feature to lighten dark areas without affecting the rest of the screen and vice versa, the AOC Game Color setting to change saturation levels, and 6 gaming modes for different game genres (3 of them user customisable).

Pricing and Availability
The AGON PRO AG254FG gaming monitor will be available this September 2021 with a suggested retail price of £699.99.