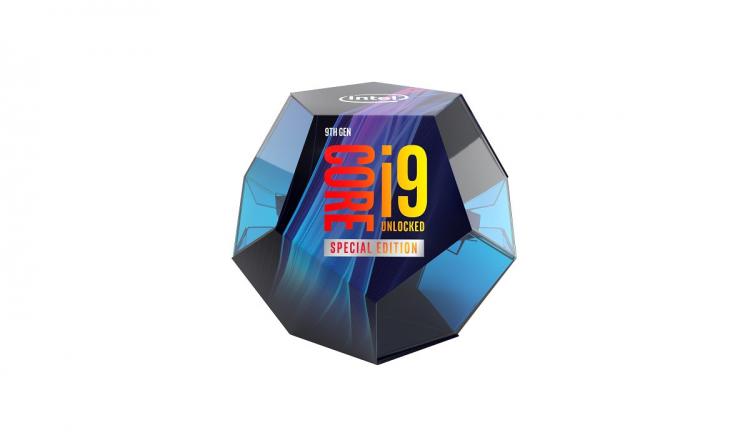 Officially, Computex does not begin until Tuesday May 28th. That minor fact however is not stopping Intel from attempting to steal a march on the competition by making big announcements before the curtain is even lifted on the industry's biggest yearly trade show.

Just comparing the Core i9 9900K with Intel CPUs just two generations older show it to be a brute of a chip for the mainstream desktop platform. Eight cores on a single monolithic die with hyperthreading, it's twice the size of the Kaby Lake Core i7-7700K. Considered largely a response to AMD's ballooning of core counts with Ryzen, it maintains their clock speed and IPC advantage despite matching core counts with the Ryzen 7 2700X.

Today, preempting AMD's expected reveal tomorrow morning of Ryzen 3000-series CPUs based on the radically redesigned Zen 2 architecture, Intel are revealing the Core i9-9900KS. This optimised variant of the Core i9-9900K has been binned to be capable of 5GHz Turbo across all cores, although heat and power requirements will necessitate coupling to suitable high-performance coolers and power delivery. In Intel's words, this should make the worlds best gaming processor even better.

A new flagship model in the desktop 9000-series will hopefully also result in a downward adjustment of Intel's CPU pricing, although that is an assumption on our part. In all likelihood any price changes will be dependent on AMD Ryzen 3000-series CPU performance and series segmentation. 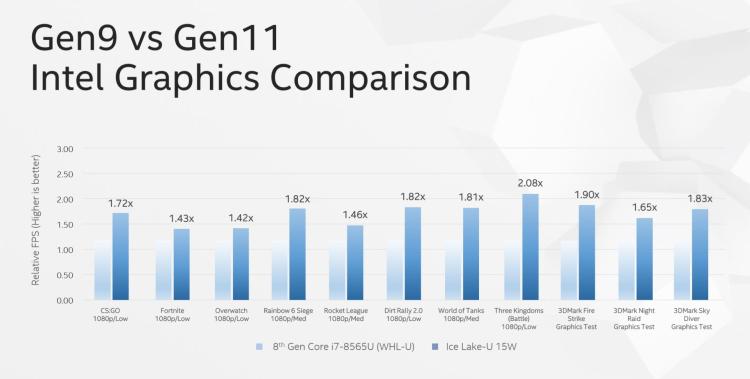 More pertinent to Intel's long-term fortunes however is their upcoming 10nm Icelake architecture. The first Icelake CPUs are due to be incorporated into mobile devices first, specifically notebooks; at CES Intel and Dell came together to demonstrate pre-production models of upcoming notebook SKUs featuring this CPU range and scheduled for Q3/Q4. Discrete graphics aren't an option in this form factor in the main, making the CPUs iGPU all the more important. It's this aspect which Intel have previewed today, priming for more announcements in the not too distant future.

The Gen11 graphics at the heart of Icelake CPUs are, it's claimed, capable of up to twice the performance of their Gen 9 counterparts present in the majority of 9th Generation Core CPUs. In an industry first, this iGPU will incorporate Variable Rate Shading, a feature that until now has been exclusive to NVIDIA's Turing GPUs (GeForce GTX 16-series and RTX 20-series). Integrating VRS on iGPUs is expected to be at least partially responsible for this uplift in performance in games optimised for the technology. 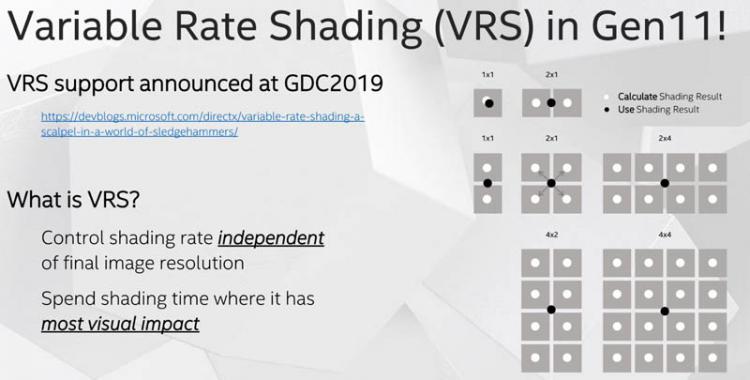 Variable Rate Shading allows shader resources to be allocated dynamically around the scene based on factors such as texture complexity, expected change from previous frame and more. These techniques improve the overall time to render a scene without reducing image quality, but need to be incorporated by software developers at an engine level rather than tacked on as some sort of afterthought.

Because VRS and other architectural features require optimisations at the driver and game engine level, Intel is keen to highlight their partnerships with software houses not only in optimising for their CPUs but also updated GPU architectures. They claim more that 15,000 of their software engineers are working on unlocking performance, much of which will be fed back to games developers.

Heterogeneous computing as a concept may have fallen out of vogue with marketers in recent years but for Intel it's been a guiding factor in Ice Lake's development. As a highly integrated platform for laptops, Ice Lake combines a new Sunny Cove core, Gen11 graphics, Thunderbolt 3 I/O and Wifi 6 into a solution that's more powerful than the sum of its parts.

Ice Lake will also be the first CPU to incorporate Deep Learning Boost into the PC on the CPU and AI instructions on the iGPU, accelerating core everyday workloads such as image deblur and stylising videos. These burgeoning aspects of a CPU architecture's arsenal are reflected in the latest generation of Xeon Scalable Processors, which accelerate relevant workloads many times over.

The Core i9-9900KS and laptops featuring cutting edge Ice Lake mobile CPUs are expected to be available later this year. Price and exact timing have not been divulged.

Intel will no-doubt have much more to share during their Computex Opening Keynote on May 28th. While the momentum may be behind AMD at present, only a fool would write-off a company whose deserved nickname is 'Chipzilla'.