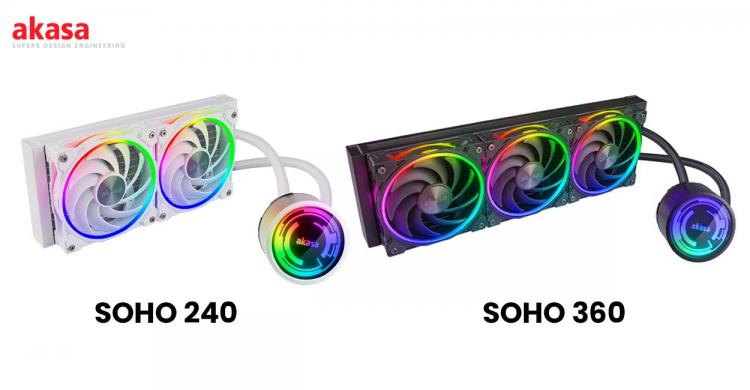 Akasa has released their latest AIO watercoolers under the SOHO range - the Akasa SOHO 240 and SOHO 360 all-in-one liquid CPU coolers. These coolers come with addressable RGB lighting and premium SOHO AR fans to light up your PC and accentuate its best features. The cooler is compatible with the latest LGA 1700 processors from Intel and AMDs AM4 processors including the top-tier multi-core variants such as the Intel Core i9 12900K and AMD Ryzen 9 5900X. The Akasa SOHO 240 is available in Dusk Black and Dawn White editions while the larger Akasa SOHO 360 is only available in the Dusk Black edition.

RGB Lighting with Akasa SOHO AR12 Fans
Create your unique aesthetic using the Dusk Black or Dawn White editions of Akasas SOHO 240 AIO watercooler. The sleek, clean design provides a great base for a stealthy build, or use the high-performance SOHO AR12 fans (included) to add splashes of colour and highlights. With over 16 million combinations of colours, the aRGB can bring your build to life; the lights are compatible with all major RGB software such as GIGABYTE RGB Fusion, MSI Mystic Light, ASUS AURA Sync, ASRock Polychrome, and Razer Chroma RGB. A convenient controller is included in the package, which can be used to sync the lighting effects together.

High-Performance Liquid Cooling
The heatsink pump contains a copper base with high-density cooling fins, which presents a higher surface area for the liquid coolant to flow over, improving the heat dissipation of the AIO liquid cooler. A durable three-phase motor runs the pump which generates a low amount of turbulence whilst maintaining a high flow of coolant, leading to a smooth, quiet, and powerful pump. The durable bearings and sealants prevent leaks and keep the whole system water-tight, keeping your mind on more important matters. Anything becomes possible from gaming to streaming, video editing to 3D rendering with the ultimate AIO liquid cooler.

Powerful Cooling Fan
The included SOHO AR12 fans provide the premium experience necessary for high-end liquid cooling. With an aerodynamic design, the impressive fan produces a powerful airflow of up to 52.9 CFM and strong air pressure of up to 1.75mm-H2O. With the SOHO 240 watercooler, two colour-matched fans are included, whilst the SOHO 360 (currently only available in Dusk Black Edition) comes with three fans. SOHO AR fans are also available to purchase separately, allowing for a clean and complete aesthetic.

Pricing and Availability
The SOHO 240 Dusk, SOHO 240 Dawn, and SOHO 360 Dusk are available to order throughout the UK, Europe and the US.

There are currently 488 user(s) online:
Google