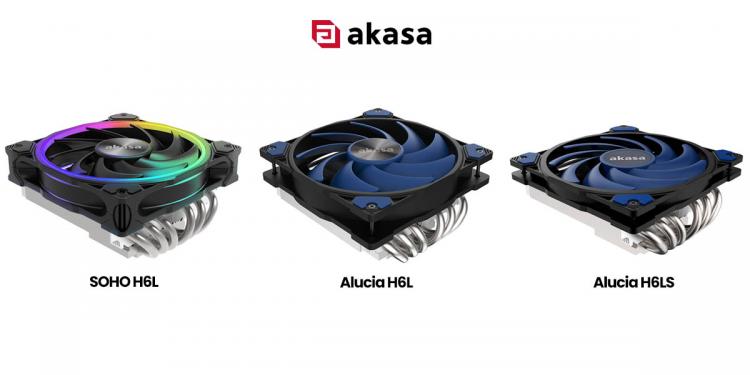 Akasa introduces the SOHO H6L and Alucia H6L low-profile CPU coolers for small form factor cases - both rated at 130W TDP and height of 67.2mm. Akasa also introduces the Alucia H6LS which uses a slim 120mm cooling fan that reduces height further to just 57.2mm. All three CPU coolers support the AMD AM4 socket and Intel LGA 115X and LGA 1200 sockets. The coolers currently do not support Intel's 13th generation processors, LGA 1700 socket. Akasa did not reveal if they plan to release a mounting bracket to support LGA 1700 at a later date. The Akasa SOHO H6L, Alucia H6L, and Alucia H6LS use identical heatsinks, the difference is simply the included cooling fan wherein the SOHO H6L uses an ARGB cooling fan that supports motherboard RGB sync technologies. Read the press release below.

Press Release
Akasa, a leading provider of active CPU cooling solutions has recently produced a new low-profile CPU cooler, capable of taming some of the most powerful CPUs on the market. The SOHO H6L and Alucia H6L are both rated at 130W TDP, making them the perfect choice for high-performance, small form factor PC builds. 67.2mm

Akasas newest coolers are made up of premium heat sinks with six heat pipes to help disperse the heat from the processors. This allows for an efficient transfer of heat; the small and mighty coolers can handle up to 110W TDP CPUs (such as Intel i9 12900T, and AMDs Ryzen 9 5900). Complete your mini-ITX or thin mini-ITX motherboard builds using these high-performance coolers!

Compatibility is not an issue for the SOHO and Alucia H6L coolers, as mounting kits are included inside each package for current LGA 1200, AM4. The mechanism is easy to install, simply follow the instructions in the manual to set up the cooler for each socket type.

The SOHO AR fan included with SOHO H6L has an iconic, minimalist, neon-style aRGB ring, with over 16 million lighting combinations. The aRGB connects using a three-pin 5V header, seamlessly controlled using all major RGB control software such as Gigabyte RGB Fusion, MSI Mystic Light, ASUS Aura Sync, ASRock Polychrome, and Razer Chroma. Akasa also provides aRGB controllers if the motherboard does not include them, which are an excellent addition to any colourful build (for example, product code AK-RLD-04).

If space is even more of a problem, Akasa has also made the Alucia H6LS, which includes a slim version of the Alucia fan. This reduces the height even further, from 67.2 mm to 57 mm, whilst maintaining a high TDP rating of 110W. Go further with the small form factor, a compact and powerful cooler is available in the Alucia H6LS! 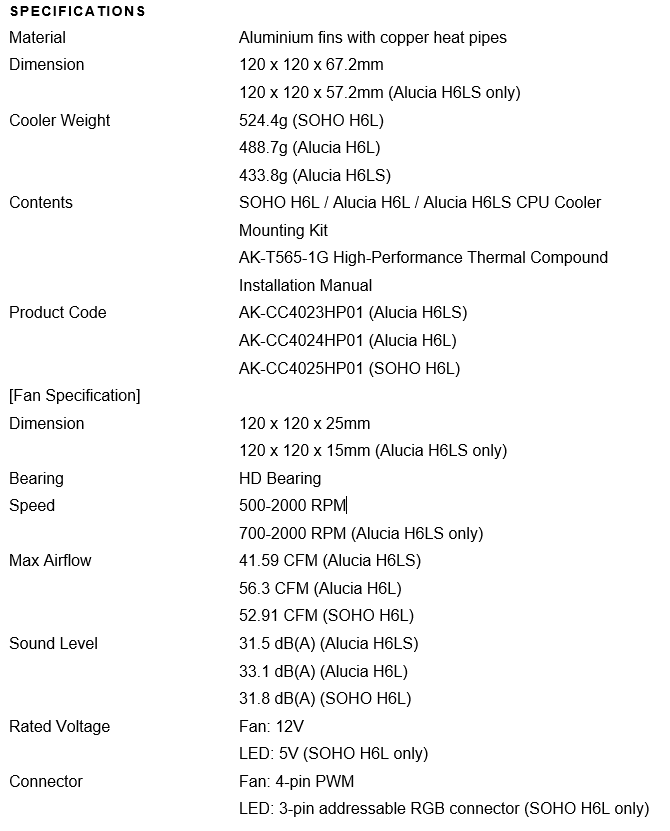