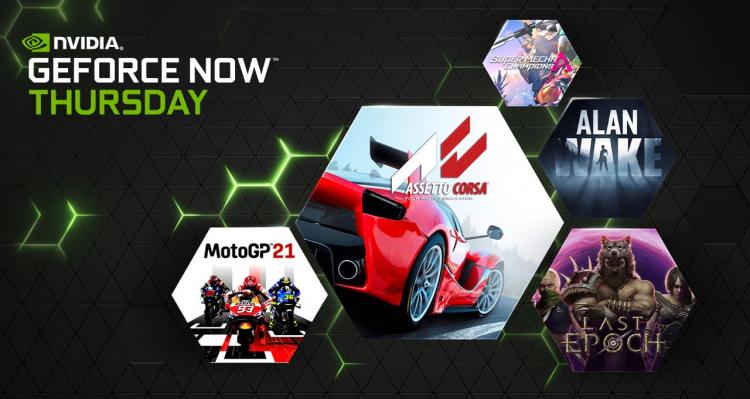 Some of the games coming to NVIDIA GeForce NOW this May

NVIDIA's GFN Thursday has rolled around once again with update announcements for the GeForce NOW cloud gaming streaming service. Over the course of May at least 60 titles are going to be added to the platform, from new releases down to legacy titles in need of optimisation for streaming gameplay, seventeen of which flow through the pipeline today.

Alan Wake is perhaps the biggest name to join GFN this week. Two installments of the atmospheric thriller franchise - Alan Wake, and Alan Wakes American Nightmare - will be playable over the cloud, alongside other heavy hitters including Call of Juarez: Gunslinger, Assetto Corsa and Tom Clancys Splinter Cell Blacklist. In fact it's a double-header for driving sims as MotoGP21 also becomes available for play.

Those are all Steam titles but the Epic Game Store isn't overlooked. The Legend of Heroes: Trails of Cold Steel IV is another long-running franchise installment, while survival adventure Pine is this week's free game from the EGS storefront.

You will need to own each title through its respective storefront in order to play the game on GeForce NOW with a Free or Priority subscription account. Those with a Priority account will have prioritised queueing and hardware, including the ability to play with RTX features such as ray tracing unlocked. With GeForce NOW you'll be able to play these and hundreds of other titles you own on with a very barebones home PC or laptop, which might be just the tonic if you're struggling with a GPU upgrade or replacement.

A full list of titles new or optimised to GFN this week is:

There are currently 832 user(s) online:
Google