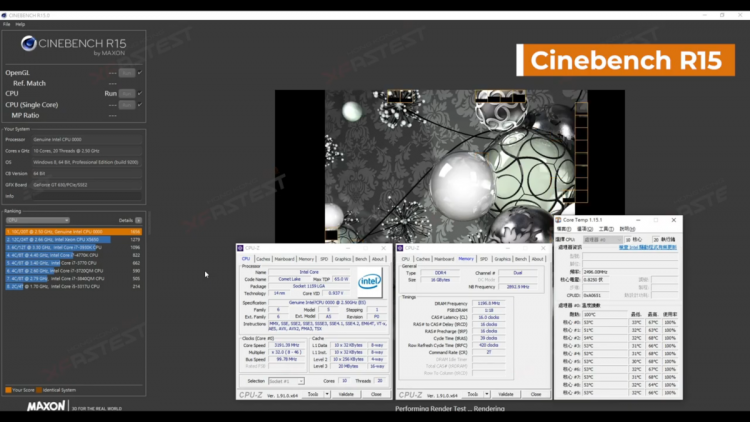 A price listing for some of Intel's 10th Generation Core CPUs wasn't the only Comet Lake information to be whispered this weekend. Hong Kong-based XFastest got their hands on an alleged engineering sample of the upcoming Core i9-10900, which they duly ran through the Cinebench R15 and R20 benchmarks and published the results.

Final specifications of the i9-10900 haven't been officially released, but slides uncovered by Informaticacero in December detailed this 65W chip as a 10c/20t CPU with maximum single-core Turbo of 5GHz and all-core Turbo of 4.5GHz from a base frequency of 2.8GHz. In theory that's only a couple of bins lower than the Core i9-10900K, but the latter's base frequency of 3.7GHz shows how the Turbo frequencies can flatter to deceive.

As a proviso, we should note that Engineering Sample CPUs sometimes (but not always) differ in behaviour from retail variants. Operating frequencies could be lower, Turbo Boost behaviour could change prior to release, they could run hotter and more besides. Two obvious miss-matches in this case are that Cinebench and CPU-Z don't recognise the CPU Specification and instead return "Genuine Intel?CPU 0000", and the base frequency is listed as 2.5GHz rather than 2.8GHz. Essentially, their results won't always reflect what the final product is capable of.

Watching the video, it's clear that the i9-10900 ES is being hampered in some fashion, likely primarily by restrictions on frequency. During load on all 10 cores the CPU appeared to top out at 3.4GHz, while single core maximums were in the 4.3-4.4GHz range; a far cry from its listed specifications, even if those specs are hedged as 'up to'. 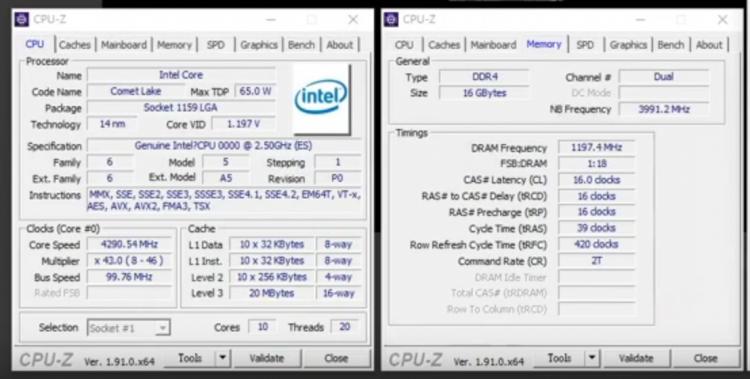 The substantial restriction placed on the i9-10900 by a 65W TDP (and associated power maximum draw) partially but not fully explains these figures. Another aspect that should be accounted for is the pre-release nature of any LGA1200 motherboard XFastest would have paired this chip to. A work in progress BIOS would most certainly detrimentally impact scores.

It's unlikely that consumers would be keen on a 10-core chip that performs on par with a 6-core one in multi-threaded workloads, so we have to assume (and hope) that the final retail design will have more to give. Suffice it to say that on this evidence the i9-10900 won't be breaking any records, but that cannot be extrapolated up to the i9-10900K.