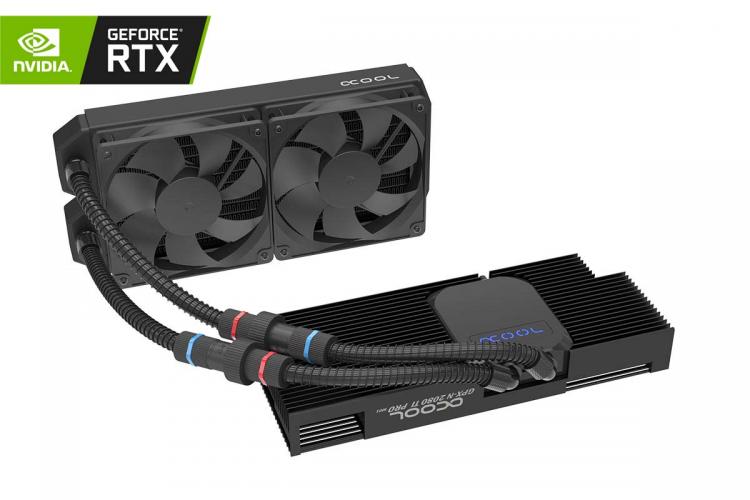 Alphacool presents the Eiswolf 240 GPX-Pro Nvidia GeForce RTX 2080 / 2080Ti, the worlds first all-in-one liquid cooler for the NVIDIA GeForce RTX 2080 Ti and RTX 2080 graphics cards. The Eiswolf 240 GPX-Pro is an expandable closed-loop liquid cooler with a 240mm full-copper radiator. It comes with full-cover water block with an integrated pump that delivers silent operation. It also comes with quick-release fittings offering expandability to CPU, memory and other components that would be included in the liquid cooling loop. The cooler comes with a backplate to include passive cooling for the graphics card backend.

The Alphacool Eiswolf 240 GPX-Pro uses standard water-cooling components for easy replacement and compatibility with other standard components. It uses the standard G1/4 threads which can be easily replaced with other models if desired. The tubing is also the standard 11/8mm which can be easily replaced as well. The two quick-release fittings enable quick integration with the Alphacool Eisbaer CPU AIO coolers to create a CPU+GPU liquid cooling system with two pumps in circulation. In such setup, the second pump acts as a failsafe in case the first pump fails to ensure cooling to critical components at all times.

Pricing and Availability
The Alphacool Eiswolf 240 GPX Pro Nvidia GeForce RTX 2080 / 2080Ti - Black M01 is available for pre-order at the Aquatuning website with an MSRP of 179.79  including VAT.